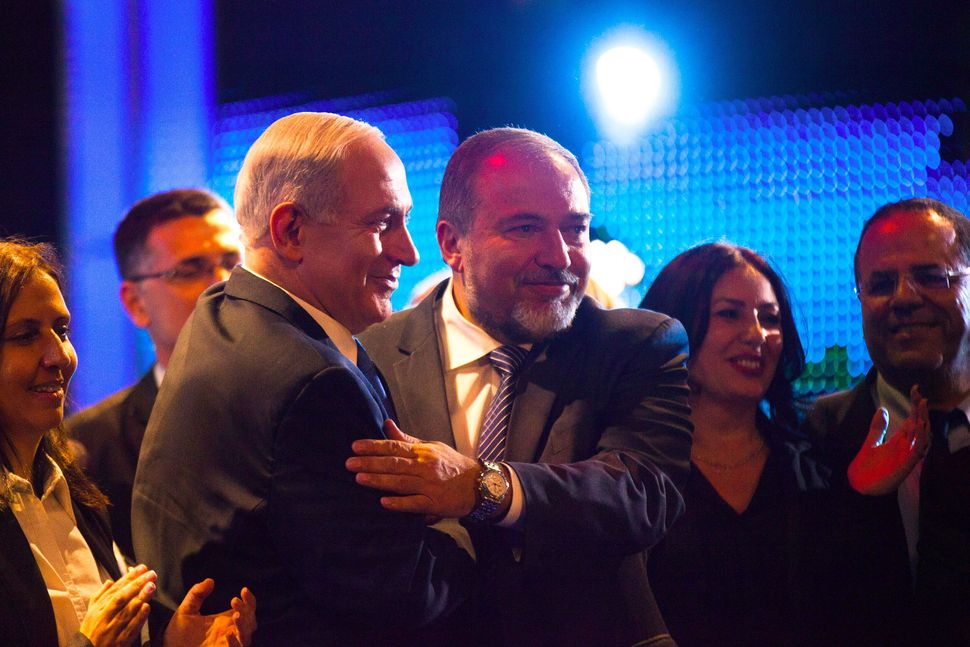 There are many ways to describe the Israeli cabinet shakeup that brings arch-nationalist Avigdor Lieberman into the Netanyahu government as defense minister. It’s a broadening and firming of a shaky coalition. It’s a lurch to the right. It’s a settling of scores. Most consequentially, though, it might be called a military coup in reverse.

That is, it’s a sudden strike by Israel’s civilian government to reassert control over a military that’s been acting lately like an alternate source of authority. On issues as large as regional strategy toward Iran or relations with the Palestinian Authority and as small as rules for opening fire, the military command has repeatedly questioned, challenged or openly clashed with its civilian bosses. That’s untenable in a democratic society. A counter-move was inevitable.

By removing defense minister Moshe Yaalon, a former career soldier and military chief of staff who’s part and parcel of Israel Defense Forces culture, and replacing him with Lieberman, a frequent critic of the military brass, Netanyahu is showing the generals who’s boss. That may not be what Netanyahu intended in this latest round of coalition musical chairs, but that’s what happened.

On the flip side, the change of ministers appears to have alarmed and demoralized the army command. And not just the army. In unseating Yaalon, the prime minister has deposed one of Israel’s most respected military minds. Replacing him with Lieberman, he’s put one of the world’s most complex military machines in the hands of a populist rabble-rouser whose highest military rank was corporal. In a nation as threatened by enemies and as dependent on its military prowess as Israel, that’s immensely risky.

Tensions between the politicians and the security establishment have been building for more than a decade. In 2002, the chief of Mossad urged then-prime minister Ariel Sharon, unsuccessfully, to welcome the Arab Peace Initiative. A year later the four living ex-heads of the Shin Bet security service gathered for a group interview and urged Israeli withdrawal from the territories in order to create a Palestinian state separated from Israel by a border. Since then nearly all the ex-chiefs of the Shin Bet, Mossad and Israel Defense Forces have echoed this call, citing the need for security of a border separating Israel and the Palestinians. The sole exception, ironically, is Yaalon, the only living former service chief who opposes Palestinian statehood.

Tensions mounted through a series of military actions in Gaza between 2008 and 2014 as the military set limited goals, aiming to end the action in a ceasefire, while the right called for punishing force and a reoccupation of Gaza. Added to that was the unanimous opposition of the security services to an Israeli attack on Iran.

The tensions have been white-hot since March 24, when a soldier shot and killed a Palestinian terrorist who was lying wounded and immobilized on the street in the West Bank city of Hebron. The soldier was arrested and charged with manslaughter; his trial began May 9.

The arrest has caused an uproar on the political right. Critics, ranging from organized soccer hooligans to leading members of Netanyahu’s own cabinet, say the soldier was a patriot doing his duty by killing an enemy terrorist. The military command is accused of trying to enforce a sort of left-wing political correctness. Yaalon was virtually alone among government leaders in defending the generals’ actions, insisting that Israel’s army has a moral code to uphold, even in battle. Netanyahu initially backed Yaalon and the generals, but quickly reversed course and reached out to the soldier’s family.

The tension boiled over on May 4 when the army’s second-in-command, deputy chief of staff Yair Golan, declared in a Holocaust Remembrance Day speech that some currents in present-day Israel are reminiscent of “processes that took place in Europe and especially Germany” in the years leading up to World War II. Rightists claimed Golan was parroting foreign leftists who accuse Israel’s military of Nazi-like tactics. Netanyahu joined the critics, while Yaalon defended the general.

To be sure, the shakeup’s first and most immediate effect is to expand and stabilize Netanyahu’s fragile coalition. For the past year, operating with a narrow one-seat majority of 61 in the 120-member Knesset, the prime minister has been vulnerable to the whims of any back-bencher who wanted to make a point. Recruiting Lieberman’s faction adds five more seats for a stable majority of 66. There had been six members in Lieberman’s caucus, but one quit the party when the deal was announced, protesting Netanyahu’s social policies.

On the international stage, too, the Netanyahu-Lieberman alliance lands like a bombshell. The agreement went public just a day after a major speech by Egypt’s president Abdel Fattah a-Sisi, calling for a renewal of Israeli-Palestinian peace talks and promising warmer Israeli-Egyptian ties in return. Netanyahu had responded warmly. There were rumors in Israel that Sisi was working on a softening of the 2002 Arab Peace Initiative, a Saudi plan offering Israel a full regional peace in return for Palestinian statehood along the pre-1967 armistice lines. Israel has never accepted the Saudi initiative.

Any such talk will now go by the wayside, given Lieberman’s reputation in the Arab world as an anti-Arab racist and hardline hawk.

What’s more, Sisi had been pushing hard, in cooperation with Secretary of State John Kerry, for Netanyahu to broaden his coalition by bringing in Labor Party chief Isaac Herzog and his 24-member Zionist Union faction. Cairo and Washington apparently hoped the moderate Herzog as foreign minister could bring Israel into a French-led international peace conference. Talks between Netanyahu and Herzog had been accelerating in recent weeks, until Herzog was hit with the surprise news of the Lieberman deal on May 19.

The Netanyahu-Lieberman alliance throws Herzog back on his heels and leaves his Zionist Union in chaos. Herzog’s hold on his party has been shaky since he narrowly lost the March 2015 parliamentary elections to Netanyahu. The bylaws of his Labor Party, the major partner in the Zionist Union, call for a leadership primary within 14 months if the party loses an election. Joining a Netanyahu coalition was Herzog’s best hope for retaining his post.

Much of his left-leaning party is fiercely opposed to partnering with Netanyahu. He’d spent the past year repeatedly denying rumors of back-channel talks with the prime minister. Nor has he been effective as parliamentary opposition leader. And now that the coalition negotiations have blown up in his face, he’s under assault as party leader.

Several rivals have emerged with their eyes on replacing him, including his predecessor, onetime television newswoman Shelly Yachimovich, and high-tech entrepreneur Erel Margalit. Fortunately for Herzog, none of the potential challengers seems to be gaining any traction.

Conventional wisdom is that with the mood in the public drifting rightward, only the emergence of a Yitzhak Rabin-style military figure could revive the party of the left. The latest Netanyahu cabinet shuffle seems to be aimed directly at heading off that possibility.