What We Orthodox Jews Must Do To Save the Western Wall 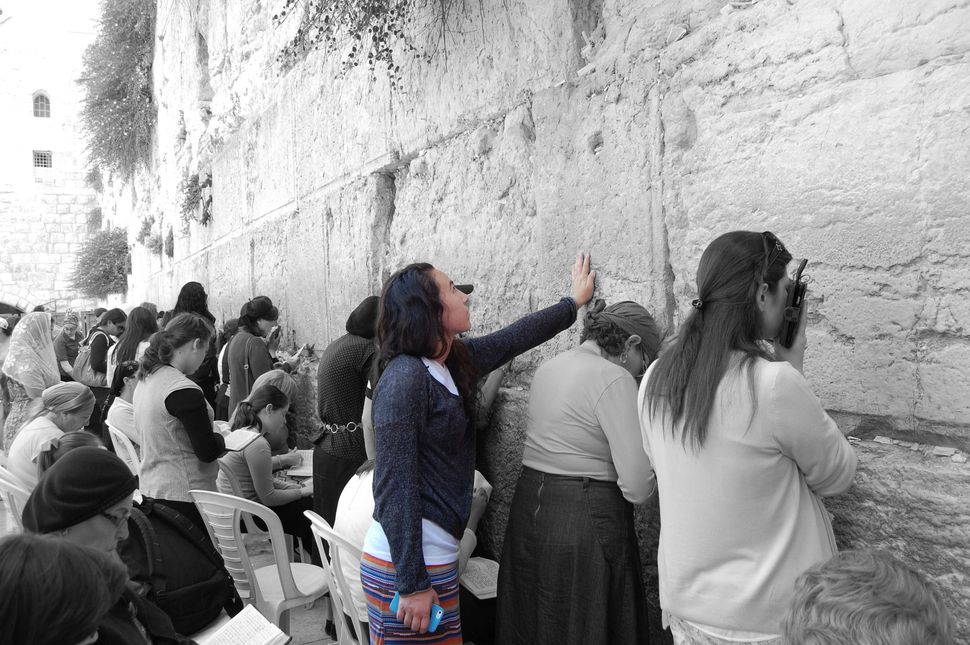 The author at the Western Wall, 2014. Image by Courtesy Laura Adkins

On Thursday afternoon, around 500 men and women gathered in the Southern Plaza of the Western Wall — a stone piazza commonly used for swearing in soldiers or taking an iconic tourist selfie near Judaism’s holiest site — to hold a defiant afternoon prayer service in response to what they feel was a terrible display of government-sanctioned disrespect. During the service, the shameful lack of action from the government only worsened: Rabbi Gilad Kariv told Army Radio that ultra-Orthodox protesters were “cursing and shoving, and police aren’t lifting a finger.”

Our broader Orthodox community certainly isn’t doing much to defend them, either.

The act that triggered this prayer service of protest was the service led by the Chief Rabbi of Jerusalem, accompanied by police and a small delegation of worshippers, on Tuesday. The group erected a temporary barrier in the area south of the Western Wall that has for years served as the only space near the Kotel reserved for mixed-gender prayer. The rabbi, who has previously claimed that the “sole purpose” of liberals and Reform Jews “is to rip the Torah out of Israel and defile the religious courts and everything that’s holy,” also tearfully lamented the plan, approved but currently stalled by Prime Minister Benjamin Netanyahu’s government, that would create a more permanent area for mixed-gender worship.

While Conservative, Reform and Reconstructionist leaders still hold prominent positions in global Jewish life, the insidious creep of ultra-Orthodox thirst for power in Israel cannot be ignored. The situation is growing intolerable; if we are to continue to praise Israel’s democratic character and assert that Israel is a safe haven for every Jewish person, we must also challenge the notion that Orthodoxy — which only a minority of Jews worldwide consider themselves a part of — speaks for every Jew. We must demand that those who seek to worship at the Kotel and across Israel, no matter how they spiritually identify, have a safe place to freely practice their religion in their ancestral home.

As for those of us who are members of the Orthodox community, most of us don’t feel personally affected by the increasing difficulty of defending and carving out new egalitarian prayer spaces in Israel.

Nonetheless, we cannot stand idly by.

By ensuring the egalitarian section lies outside of the main Kotel plaza and displaying a shameful lack of urgency regarding that space’s creation, Netanyahu and other Jewish leaders are enforcing a notion many of my non-Orthodox friends already secretly believe to be true: Those who wield Jewish institutional power, especially in Israel, see little place for non-traditional Judaism. By reinforcing this notion, these leaders are alienating fellow Jews from Judaism.

Since 1988, the progressive group Women of the Wall has been advocating for the rights of women to sing, read from the Torah, and wear religious garments at the holiest site that exists in the world for Jews today. You’d think this would be something that the only democratic country in the Middle East, which often touts its religious liberty, would embrace wholeheartedly. But as Israeli leadership continues to cozy up to the local power-hungry ultra-Orthodox elite, even those seeking to freely practice Judaism within the confines of a sex-segregated space are unable to do so without fear of prosecution.

Years ago, when I first had the privilege of praying at the Kotel, I was overwhelmed not by the impressive spiritual place in which I stood, but by the oppressive cloud of disenchantment that hung over the women’s section. While just over the thin wooden barrier to my left I could hear what sounded like a block party of biblical proportions, with singing and dancing and exultations, on the women’s side all of the heads around me were hung in solemn piety.

I didn’t understand the phenomenon at the time. Perhaps the atmosphere could be attributed to the catch-all “oppression of Orthodox women” that as a Modern Orthodox woman in the States I seldom experience. But as I developed deep friendships within the Conservative and Reform communities in the U.S., I began to understand: The discomfort and disengagement around me arose not from separateness, but rather from imposed smallness; not from a truly “separate but equal” space like those found in the Modern Orthodox congregations where I choose to pray, but from a tactical “othering” and physical shrinking of the women’s side.

Reprehensibly, we are allowing the rigidly ultra-Orthodox among us to impose an unacceptable physical othering of the majority of Jewish people.

The hypocrisy is overwhelming. The very same Orthodox leaders — including my beloved Orthodox rabbis here in America — who hem and haw about how hard it is to keep Jews engaged in Jewish life stand idly by as hundreds of men and women are arrested and harassed for taking part in Jewish prayer.

Thankfully, there are some Orthodox leaders who take a different stance regarding the Kotel. In a characteristically brilliant op-ed, Rabbi Natan Cardozo writes:

“We are not even able to maintain enough unity to preserve one single place in the entire world where we can come together and express our Jewishness in prayer without any discord…No denomination should have control over it, and it should have no barriers separating people. It must be designated as a place where people can touch Heaven and experience a feeling of true holiness.”

The Western Wall is the most sacred physical space we have left. If we have any hope of maintaining that, we Orthodox Jews better get our act together.

What We Orthodox Jews Must Do To Save the Western Wall