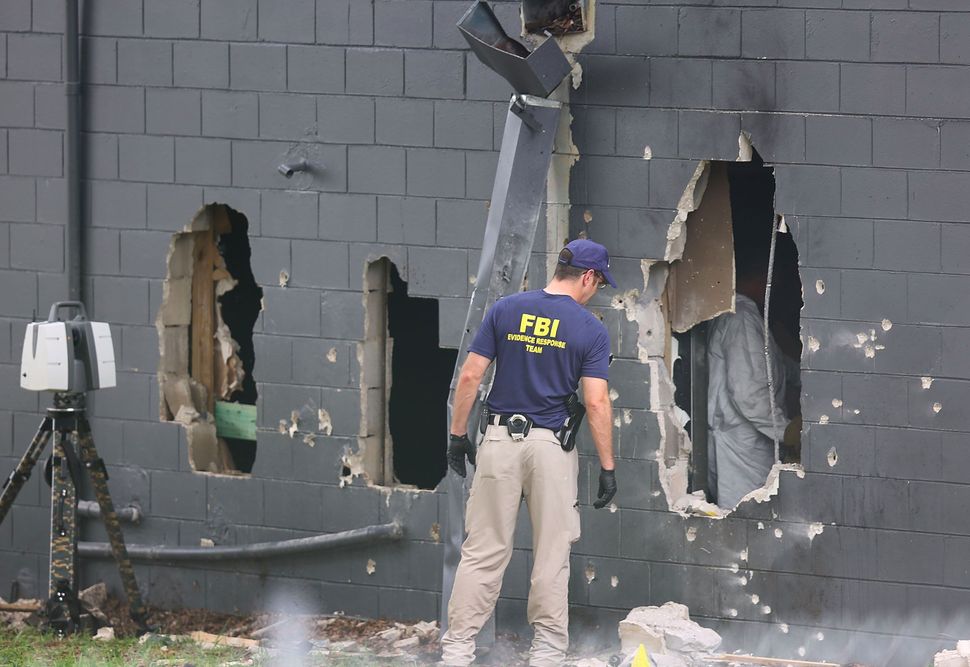 The time that elapsed between the initial reports on American networks of the carnage in the Pulse nightclub in Orland, Florida — when the incident was labelled a “mass-shooting” — and its definition as a terror attack symbolizes the West’s  21st-century difficulty in classifying murders carried out for ideology, religion and politics.

Even when the details accumulated and it appeared that Omar Mateen had pledged allegiance to the Caliphate of the Islamic State group before he died in a firefight with the police, the difficulties in affixing the proper label remained.

Every camp in America’s political and cultural wars is already out to use the bloodbath in its ongoing campaigns. it was an Islamist atrocity, a homophobic hate crime, another tragic result of the hallowed freedom to bear arms. Further afield are those who would like to make a clear connection between the victims of a shooting in a Tel Aviv restaurant three days earlier and those gunned down in the club in Florida.

Others would prefer to connect Orlando to another, concurrent mass murder: the killing of at least 27 people and wounding of about 70, many of them children, by bombs dropped on a market in a rebel-held area of Idlib, in northern Syria, from planes of the Assad regime or the Russian air force. Still, there are those who prefer to view this as an all-American crime, yet another sign of the rising violent atmosphere in a deeply divisive election year.

The Islamic State’s leaders announced on the eve of Ramadan that any Muslim carrying out an attack in the West can be considered their follower. But even if it transpires that Mateen was in contact with Islamic State members, this is very different from the type of attacks carried out in Western Europe in recent years.

Mateen was a “lone-wolf” attacker, acting on his own accord, most likely without support from his immediate community. Just like the murder of 14 civilians six months ago by a Pakistani-American couple in San Bernardino; the two brothers from Kyrgyzstan who bombed the Boston marathon in 2013, killing three and later on two more police officers, and the Muslim officer and psychiatrist who shot dead 13 military personnel on a Texas military base in 2009. In all these cases, and other similar ones, there was a toxic mixture of religious radicalization over the internet, personal frustrations and available weapons.

Just as in understanding the recent attacks in Israel, it is wrong to ignore the ongoing occupation, along with religious extremism and a generations-old hatred. And just as it would be remiss to overlook the civil war, the geopolitical maneuvering and the historic Shi’ite-Sunni divide in analyzing the ongoing carnage in Syria — all the factors leading to last night’s massacre in Orlando should be taken into consideration. Even if it’s not comfortable or convenient for President Obama and those who are vying to replace him to do so. This is an attack that defies easy labels.

Like the Islamic State attacks in Western Europe, the Orlando massacre was carried out by a “homegrown” terrorist who knows the local language and moves around freely.

There is also the abundance of “soft” civilian targets that cannot all be secured, and a lack of intelligence to pre-warn of the attack.

But that is where the similarities end. The availability of weapons in the United States is inconceivable to outsiders. Not just the ease with which a “civilian version” of a military assault rifle can be bought over the counter, but the possibility of loading it with customized magazines holding 100 bullets, more than three times the number even armies use. The potential for bloodshed by one isolated and individual attacker is so much greater.

But there is another aspect as well. To carry out an attack with such a death toll, as Al Qaeda members did on London’s public transport system in 2005, and as the Islamic State cell did last year in Paris and in March in Brussels, took many months of planning and needed a network of dozens of local supporters of Jihad. Among the 3.3 million Muslims living in the United States, no such networks, of the kind that operate in France, Belgium and Britain, have so far been detected. The biggest terror attack of all – the crashing of airliners in to the Twin Towers and the Pentagon on September 11, was carried out by foreign citizens without any significant support from American Muslims.

By any scale, the number of young Muslims from the United States traveling over the past few years to fight with Islamic State in Syria and Iraq has been tiny, especially when compared with those from Western Europe. As has become abundantly clear recently, America has as much a problem of xenophobia as any other country, but it is still to a large extent a nation of immigrants, where also Muslim citizens have a decent opportunity to become part of society and join the middle class.

It lacks neighborhoods like Molenbeek in Brussels, and the poor suburbs of Paris, Marseille and Toulouse, where young Muslims grow up, disconnected from the wider society, and radical imams preach without being disturbed. That hasn’t prevented lone-wolf American attackers being radicalized online and carrying out attacks, but it does give hope that the United States, not just it’s law-enforcement agencies but also its leaders and society, can still pull back from the brink and prevent more bloodbaths like the one in Orlando.