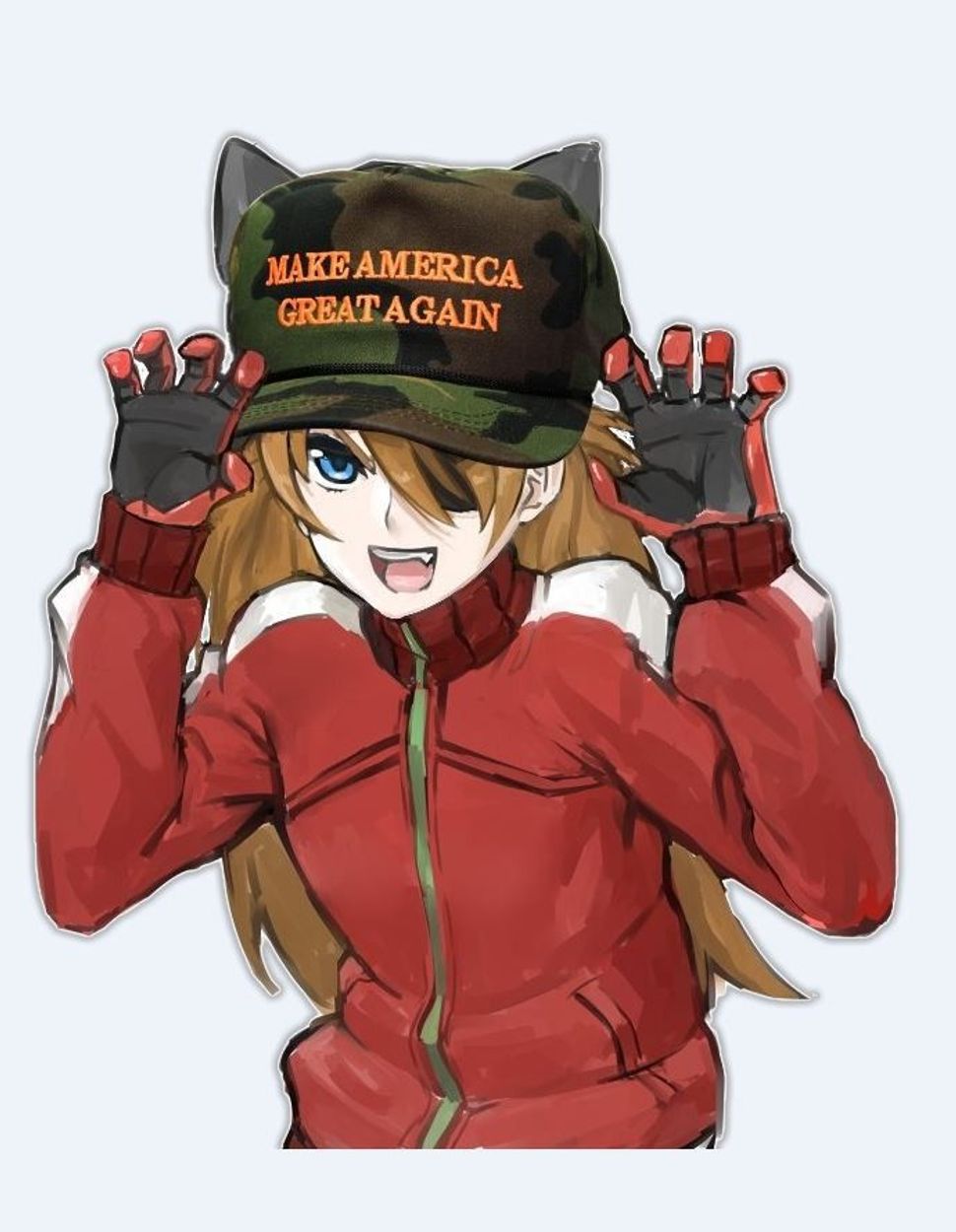 In the week since my column on Donald Trump was published, I’ve been avalanched by several hundred anti-Semitic tweets. Pictures of me in a gas chamber, pictures of Trump saying “you’re fired” next to a death camp oven and hundreds of hate tweets calling me a kike, a traitor, a rat and far worse. Others have written about similar experiences but it has been a harrowing, educational experience.

One meme, however, grabbed my attention. Posted several times, it featured a female, catlike anime character wearing a “Make America Great Again” hat, her hands/paws in attack mode. Despite a fair amount of googling and searching databases of memes, I couldn’t find anyone decoding this particular image.

So I did it myself.

It turns out, the image is of Asuka, a character in the controversial, critically heralded anime series Neon Genesis Evangelion, created by Hideaki Anno in 1995. Evangelion created a mythology that makes Lost look like Candy-Land, blending together gnostic, Kabbalistic, Christian, and conspiracy theory themes and incorporating many of Anno’s own struggles with mental illness.

One of those themes concerns a shadowy organization called SEELE, which is essentially a mythologized blend of the world Zionist conspiracy (a la Protocols of the Elders of Zion), Illuminati, and United Nations. According to the Evangelion wiki, SEELE is “a secret and mysterious organization with influence over the world’s governments and organizations.” Its name comes from the German word for soul.

The United Nations is a participant in this secret organization, which has among its goal the uniting of all humanity and the erasure of national boundaries. Their ultimate motives are sinister, however, culminating in SEELE’s own control of the world (to greatly oversimplify). SEELE also has some specifically Jewish elements, in particular its knowledge of the Dead Sea Scrolls, which in Evangelion are prophetic, gnostic texts.

Asuka (full name: Asuka Langley Soryu) is a fighter pilot who becomes the great enemy of SEELE. A fourteen year old girl, she is the love interest of Evangelion’s tormented hero, Shinji. But she is also a warrior in her own right, destroying SEELE’s weapons, giant humanoid robots called Evangelions. (Fittingly for the dark series, these efforts are ultimately unsuccessful and catastrophe rains upon Earth.)

In other words, and again oversimplifying somewhat, Asuka is the warrior against the secret Illuminati/Jewish conspiracy to take over the world. And in the meme posted on my Twitter thread, she is Trump, wearing his signature hat.

Having decoded the meaning of the image, I then set about trying to document how and where it entered the employ of the white supremacist fringe.

I didn’t find much — but I did find something. On a reddit-like thread from January, 2016, I found a different image of Asuka-as-Trump as well as one post saying “If elected, Trump will bomb the shit out of SELEE [sic] and take their oil.” While this would seem to align SEELE with Arab states rather than Jews, if one takes the conspiratorial worldview that, in fact, the great conspiracy (Jewish, UN, Masonic, whatever) controls everything, then of course they also orchestrate the world’s wars over scarce resources. SEELE is as much behind Saudi Arabia and Iran as it is behind Israel.

As for where the exact meme originated, or whether white supremacists know any of this history, I don’t know. I’m certainly not going to engage with any of them in order to ask.

It’s also unclear how much all of this is really in Evangelion itself. Certainly, Anno incorporated conspiratorial themes into the series, and SEELE in particular. It’s also well-known that Japanese society often displays a curious blend of philo- and anti-Semitism, often admiring Jews for our disproportionate impact on society, media, and politics. This is true both in the mainstream of Japanese society (the Protocols of the Elders of Zion has often been a bestseller) and on the fringes (radical, conspiratorial antisemitism was part of the ideology of the murderous Aum Shinrikyo cult.

Japanese anti-Semitism experienced a surge in the 1980s and 1990s, with several books alleging that the United States was controlled by Jews and was plotting to destroy Japan. Aum Shinrikyo in particular developed fantastic myths in which the world would be destroyed and replaced with another one — myths quite similar to the plot of Evangelion, which appeared around the same time.

At the same time, Evangelion was deliberately constructed by Anno as a complex multi-narrative in which different viewers could see what they wanted to see. It is filled with dark sexual imagery and paranoid imaginings of all kinds. SEELE is part of that, but certainly not the sum of it. There is no trace of anti-Semitism in Anno’s political beliefs or other work. It seems more likely that the cultural familiarity of conspiracy theories provided a rich basis for Evangelion’s paranoid tapestry, without any particular animus or ideology.

Somehow, though, the obscure mythology of a 1990s Japanese animated series has found its way into the 2016 presidential election, with Donald Trump himself cast in the role of warrior against the international Jewish conspiracy.

It remains a mystery how Asuka became the Donald. Maybe a single anime fan connected the dots. Maybe there were more detailed conversations in inaccessible parts of the ‘dark web’ or on 4chan. Or maybe no one really knows where the image came from, but it now serves as a kind of calling card, an image whose apparent innocence enables bigotry to hide in plain view.