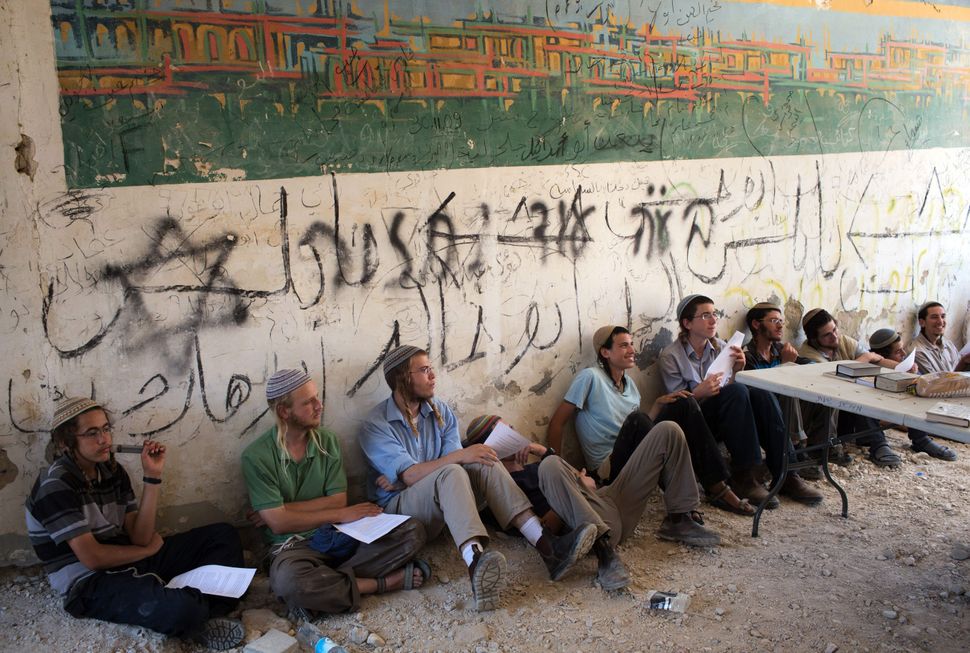 Shimon Dotan’s recent documentary, “The Settlers,” currently attracting a lot of attention in Israel, is painfully beautiful. Dotan’s shots capture both the beauty of the West Bank and the complexity of the geopolitics that are tragically tearing it apart. Along with the fantastic production, Dotan’s skills as an interviewer present the settlers, an often-misunderstood segment of Israeli society, to a wide audience. Yet the film has much more to teach us about the dogma of left-wing Israelis than it does about settlers.

According to this dogma, the settlers bear the blame for pulling Israel into the occupation. Aside from Ariel Sharon and Menachem Begin, Israeli politicians from both the right and the left are presented in the film as lacking agency as they take on expansionist colonial practices not as a matter of policy, but because they are forced to do so by radical Religious Zionists.

But at one point in the film, Levi Eshkol is heard explaining that settlement expansion does not violate the fourth Geneva Accord because Israel has always used its civilian population as part of its military defense system — exposing the possibility that Israeli politicians built settlements as a matter of policy. Similarly, Shimon Peres is depicted as caving in to the Religious Zionists’ demands for settlement expansion. But he didn’t have to be dragged to the foundation of the settlement of Ofra, where he glowingly planted the community’s first tree in 1975. As with other Labor politicians, the building of settlements for Peres was a matter of policy.

As far as more recent history goes, there is no mention in the film of Ehud Barak’s insistence on speeding up settlement expansion while participating in the Camp David talks, bringing settlement expansion to a pace faster than it had been during Benjamin Netanyahu’s first government.

Even more noticeable is Netanyahu’s complete absence from the film, despite the fact that he has been prime minister since 2009 and has continued settlement expansion throughout his tenure. The film includes shocking footage from the right-wing demonstration that took place on October 5, 1995, almost exactly a month before Yitzhak Rabin’s assassination, at which many demonstrators called explicitly for Rabin’s death. Absent is any mention that the demonstration was co-organized by the Likud. Also missing is the image of Netanyahu presiding over the demonstration, an image featured in other instances in which this same clip is shown (see “The Gatekeepers”).

The only present-day politician featured in the film is Naftali Bennett, leader of the settler-affiliated party Jewish Home. The lack of other contemporary politicians makes it seem like the Israeli government’s continued expansion of settlements in recent years is solely a result of the pressure placed by Religious Zionists on politicians like Bennett.

This perspective can also be found in the film’s interviews. The vast majority of the film’s interviewees are clearly “part of the story,” so to speak. Most are settlers, others are part of the security establishment, a few are Palestinians whose land has been occupied by Israelis, and still others are members of various governmental or nongovernmental organizations addressing different aspects of the occupation. Almost all share vivid on-the-ground personal experiences, and some also provide their own commentary. Two scholars — Tomer Persico and Moshe Halbertal — are interviewed, and they provide an “above-the-fray” perspective. But at least in Halbertal’s case, it’s inaccurate to present him as if he is not himself implicated in the occupation. Halbertal is often quoted by The New York Times, where his authority on Israeli matters comes not only from his affiliation with Hebrew University, but also from his co-authorship of the Israel Defense Forces’ military code of ethics. Yet the film ignores Halbertal’s collaboration with the IDF, which protects the settlements and enables the occupation of the West Bank even more than the settlers do.

Instead of trying to see how different segments of Israeli society enable the continuation of the occupation, Dotan neatly divides that society into two groups: the radical religious settlers and everyone else. In his view, it is those radical settlers — some 20% of those living over the Green Line — who are dragging the rest of Israel into the conflict.

This simplistic depiction also effects the way that the film portrays the settlers themselves. Returning to Halbertal, it’s perplexing that he is not asked about his own time living in a settlement. Like many male scholars of Jewish studies, Halbertal spent a number of years studying in a yeshiva, and in his case, a yeshiva, Har Etzion, located in the settlement of Alon Shvut. Involvement in the settlement enterprise runs very deep in Israeli society, even for many of its most well-known critics. Does that make Halbertal a former settler? Maybe not, but it definitely complicates the image of settlers that the film seeks to convey.

By ascribing everything to a small group of religious zealots, left-wing dogma ignores the complexity of the contemporary Religious Zionist settler community and its pre-1967 origins. As Dotan tells the story, it all began in 1967, after the capture of the West Bank and Gaza in the Six Day War, with a group of settlers that coalesced around one fixed religious ideology. But ignoring the pre-1967 antecedents of the movement makes parts of the film difficult to understand. Early in the film, we hear how the deceased Gush Emunim leader Hanan Porat wanted “to bring back” the children of Kfar Etzion to Kfar Etzion following the ’67 war. Yet it is never mentioned that the settlement kibbutz of Kfar Etzion, located in the Etzion settlement bloc, was based on a community that had existed in the same location prior to the War of Independence and that was destroyed in May 1948 in a battle that ended with the murder of the surrendered Jewish combatants.

Settlements among Arab populations are a pre-’67 story, as is Religious Zionism itself. No mention is made of Rabbi Avraham Yitzchak Kook (1865-1935), a towering figure in the history of Zionism who still has immeasurable influence over religious Zionists, although he died before the founding of the state. Without acknowledging Kook’s posthumous power, it is hard to grasp the messianic fervor that gripped the Religious Zionist community after 1967.

The lack of historical depth also comes with a shallow picture of present-day settlers. The ideological settlers are represented through interviews and archival footage of men who played an active role in Gush Emunim — a settler movement formed after ‘67 by students of Rabbi Tzvi Yehuda Kook (Rabbi Kook’s son), the hardcore group of settlers in Hebron, and young men and women described as “hilltop youth.” The emphasis on the leaders of Gush Emunim creates the impression that the entire Religious Zionist movement as it exists today descends in a straight line from this group, ignoring the evolution of the movement, and how the band of hilltop youth, for example, is held in contempt by many of the original Gush Emunim leaders. Benny Katzover, one of the founders of Gush Emunim interviewed in the film, has publicly criticized the violent activities of the hilltop youth, but that’s not mentioned in the film. And Rabbi Yitzchak Ginzberg, who is regarded as the spiritual leader of the hilltop youth, and who came to the settler movement from a very different religious ideological perspective, is ignored.

The reality is that the ideological settlers are much more diverse than the way they’re presented in the film. The film presents the Hebron massacre committed by Jewish terrorist Baruch Goldstein and the assassination of Rabin by Yigal Amir as events that took place completely within the consensus of the ideological settlers. But many Religious Zionist settlers decried these acts of violence. Rabbi Yoel Ben-Nun, a Gush Emunim founder interviewed in the film, was even forced to move out of the settlement of Ofra after he turned in extremist rabbis who may have incited Amir. None of this is mentioned in the film.

The reaction to the disengagement from Gush Katif in Gaza is also presented as monolithic. Absent is the intense debate that took the settler movement by storm during 2005 around the matter of soldiers refusing to comply with orders to effectuate the disengagement, which split the community into the Mamlachti (against the disengagement, but respectful of the government’s decision) and non-Mamlachti_ (in favor of the refusal of orders) camps.

One last example is that of Rabbi Yossi Froman, who is featured in the film primarily during its segment on the hilltop youth. Froman, who superficially resembles the violent youth interviewed alongside him, is the son of the deceased Gush Emunim member and peace activist Rabbi Menachem Froman, whom Dotan does not mention. The younger Froman, following in his father’s footsteps, is an activist, seeking to engage his Palestinian neighbors in peaceful dialogue, and he eschews the violence espoused by some of the hilltop youth — yet none of that gets mentioned, either. At one point, a hilltop youth points at a mosque in the Palestinian village of Qusra that was almost certainly torched by extremist settlers. No mention is made of the visit that the elder Froman paid to the same mosque, during which he apologized for what was done and famously shouted “Allahu akbar!” while wrapped in phylacteries.

Starting the story of the settlers in ’67 relates to a common view of the Israeli left: that everything that set Israel off course began with the occupation and settlement of the territories, the implication being that a large territorial concession will swing Israel back on course. Yet that reading glosses over the history of Jewish-Arab tensions in Palestine prior to ’67 and even prior to ’48. Placing the starting point of the settlers’ history in the aftermath of ’67 makes it easier to criticize them as a group that diverged from mainstream Zionism. Shallowly depicting them as a cohesive group, while ignoring the self-criticism within the contemporary settler movement and the voices for peace within it, makes it easier to pin the blame on them. And of course, obfuscating the fact that secular politicians from the left and right have always worked toward entrenching the occupation allows people on the secular left to forget about their own responsibility for the sins of the occupation.

Ultimately, Dotan portrays the settlers as the Israeli left likes to see them: a small group of fanatical Jews, at once entirely divorced from the rest of Israeli society and somehow capable of dragging everyone else into a deepening conflict. Until Israeli society as a whole recognizes its complicity in the occupation, that occupation will never end.

Yitz Landes will be starting a doctoral program in religion at Princeton University in the fall.