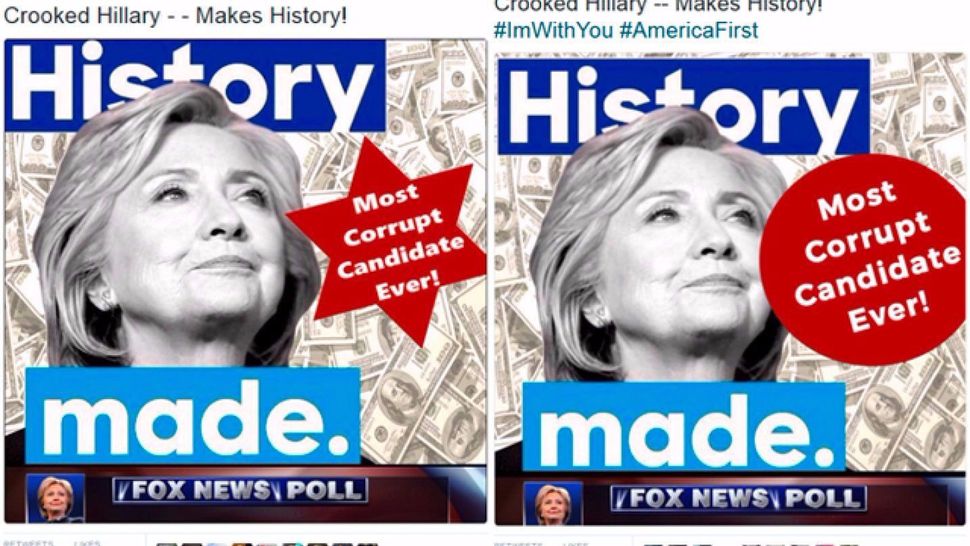 Prior to this weekend, Donald Trump had a degree of plausible deniability regarding anti-Semitism, both personally and from his campaign. While many of Trump’s legions of online supporters are explicitly (and viciously) anti-Semitic, Trump himself had little to do with them beyond his Twitter account retweeting things from accounts with #WhiteGenocide in their profiles.

On the same weekend as Elie Wiesel’s death, though, Donald Trump’s official Twitter account tweeted an image of his Democratic opponent, Hillary Clinton, with the caption “Most Corrupt Candidate Ever!” pasted within a red Star of David — the symbol of Jews for a millennium. Several hours after the tweet was sent, leading to an uproar unusual even for the candidate who traffics in uproar, it was deleted.

On CNN, commentator and former Trump campaign manager Corey Lewandowski said seeing a Star of David in a six-pointed star was a further example of observers and opponents of his former boss being overly “politically correct.” It was a sheriff’s star — despite it lacking the distinctive circles over the angles of those stars. But if the objections are mere political correctness, then why would the candidate who has built his entire campaign on being anti-PC delete the tweet?

Perhaps it has something to do with the source.

The day after the tweet was sent, the online publication Mic discovered the meme’s origins. According to reports, it first appeared on “an Internet message board for the alt-right, a digital movement of neo-Nazis, anti-Semites and white supremacists newly emboldened by the success of Trump’s rhetoric —- as early as June 22, over a week before Trump’s team tweeted it.”

The original image had a watermark, which the Trump campaign covered up, that linked it to an alt-right Twitter account with a number of racist, anti-Semitic and xenophobic images, far worse than the one Trump’s official account tweeted. Despite the fact that Trump often gives credit to Twitter accounts for originating the memes he re-tweets, he chose not to do so here.

Whenever I write about the Trump campaign’s connections to these bottom rungs of our society, I hear from his non-racist supporters (yes, they do exist): “these are just his fans, he can’t be held responsible for their actions!” But why are the alt-right drawn to Trump? Perhaps because in addition to the retweets originating from his own personal account, they see other winks and nods in their direction. Many of his actually racist supporters see the close (and now, proven) online connections between the alt-right and Team Trump.

Because the same weekend Trump tweeted the anti-Semitic image which originated on an alt-right message board, Fortune posted a deeply researched story on the most influential alt-right Twitter accounts, who they follow and — more damningly — who follows them. Turns out, the alt-right are fans of Trump, and his official campaign accounts are fans of the alt-right.

As with every close call Trump has had with anti-Semitism (which, unlike his racism and misogyny has never been overt), Trump chooses to keep retweeting from accounts that promote the theory of #WhiteGenocide (the idea that the white race is the victim of genocide) on his own timeline and then delete blatantly anti-Semitic memes without explanation when the uproar becomes too deafening even for Trump Tower.

In a normal world, a nod this blatant sent to white nationalists would have been followed by a clear and unequivocal apology from the respectable, non-racist candidate. Despite the fact that many in the media, both conservative and liberal, in this paper and beyond, have been asking for Trump to simply and loudly repudiate the alt-right faction in his camp for months, he has yet to do so.

Despite Trump’s repeated assertion that he hires “the best people” as one of his main qualifications for the Oval Office these very same people are following alt-right Twitter accounts and providing anti-Semitic memes for their boss to tweet to his almost 9.5 million followers. We are left with three possible explanations: Many in Trump’s campaign have an affinity for the alt-right; or the campaign team is too stupid to understand the company they keep; or the team is too calculating to disregard any group that will support his candidacy — even from neo-Nazis.

For most rational American voters — even Republicans like me — none of these three possibilities are in any way enticing for voters, or even conventions, tasked with choosing the next President of the United States.