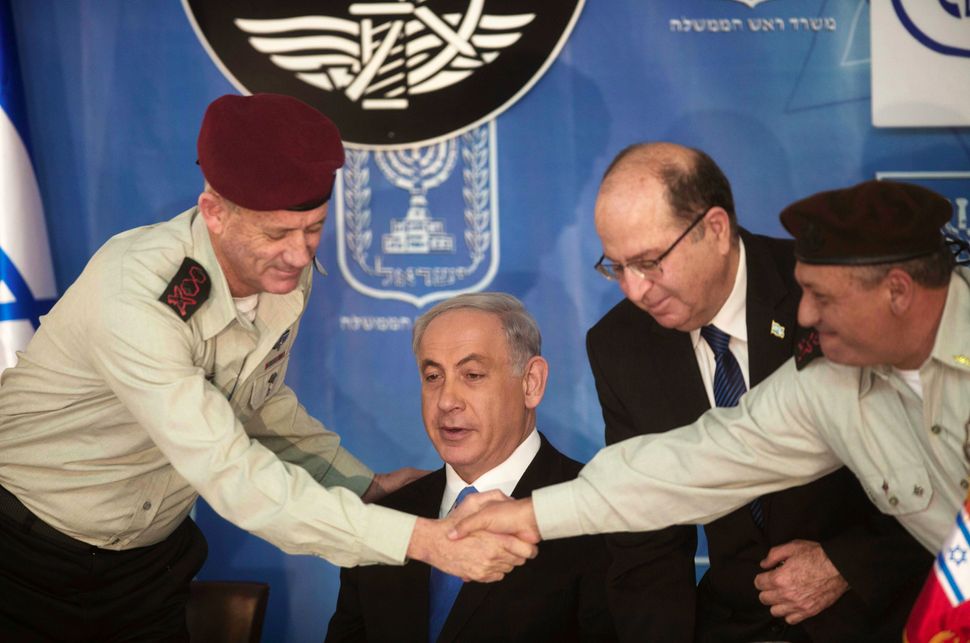 How bad have the tensions gotten between Israel’s security establishment and its political leadership? Pretty bad, and getting worse. Two public events in late June, three days apart, illustrate the depth of the growing animosity.

One was a gathering near Tel Aviv of retired senior military and intelligence officers, sponsored by the Council for Peace and Security. They came to hear a debate on the pros and cons of Israel retaining the West Bank and forming a single state between the Jordan River and the Mediterranean Sea — but the evening deteriorated into bedlam.

The other event, three days earlier, was a town hall-style meeting in Beersheba featuring a powerful Likud lawmaker, David Bitan, the parliamentary whip of Prime Minister Benjamin Netanyahu’s six-party governing coalition. He warned of “a problem” within Israel’s most trusted security agencies, the Mossad intelligence agency and Shin Bet security service, that turns their leaders into “leftists.”

The officers’ debate was instructive, but not in the way you’d expect. The speakers were blandly predictable. Two-staters warned that a single state would become either a Jewish state ruled by South Africa-style apartheid or a conflict-ridden, Bosnia-style binational state. One-staters insisted that the future is cloaked in unknowable mystery, that giving up the West Bank would leave Israel with an indefensible border, but that massive American Jewish immigration could solve the demographic problem. They argued, too, that West Bank Palestinians can be full Israeli citizens as long as they show loyalty.

What was instructive was the reaction of the audience, some 150 mostly white-haired gentlemen with the ramrod posture of career officers. They listened politely to the two advocates of Palestinian statehood. Once the one-staters began, though, chaos reigned. Officers jumped to their feet with nonstop heckling and catcalls, behaving more like kindergarteners than gentlemen, shouting things like “What are you talking about?” and “Nonsense!” Occasionally there were more coherent phrases like “Indefensible borders? How did we survive before 1967?” — the year Israel captured the West Bank and widened its narrow coastal strip.

If the officers’ organization, the Council for Peace and Security, sounds familiar, you’re probably thinking of a different group, Commanders for Israel’s Security. The two groups have roughly the same platform, favoring Palestinian statehood in order to ensure Israel’s future as a smaller but democratic Jewish-majority state. The difference between them is that Commanders, formed in 2014, includes only retired generals, plus former heads and deputy heads of intelligence services. The council, formed in 1988, accepts retirees of lower rank, as well as a few academics. Commanders says limiting membership to generals strengthens its credibility. The council says the difference is ego.

The Commanders have about 200 members, or roughly one-third of all living retired generals and intelligence chiefs. About a dozen retired generals publicly oppose Palestinian statehood. Despite the security chiefs’ near-unanimity, though, the rightist-dominated government is unable or unwilling to take the steps the generals say are necessary to move toward separation from the Palestinians.

“Every time I talk to Netanyahu I sense that he’s terrified of change,” says Labor Party lawmaker Merav Michaeli, a member of a third officers’ group, the Israel Peace Initiative. “It’s not that he has an alternative vision. But he genuinely sees a Palestinian state as a nightmare.”

It’s the conflict between the security chiefs’ overwhelming support for two states and the seeming immobility of a rightist-led political system that’s driving the growing clash between the groups. Generals complain that time is running out for a two-state solution because settlement growth will make separation impossible. Politicians dismiss the complaints as self-serving bellyaching by isolated individuals. The result is a growing mood of despair among security chiefs, leading to explosions of the sort that took place near Tel Aviv June 28.

“The only way things are going to change here is when things get 10 times worse,” retired major general Natan Sharony, a former council chair and a main heckler, told me by phone.

What’s changing now is a creeping awareness among senior politicians that the complainers aren’t a handful of grumblers but the overall security establishment.

The politicians’ alarm is compounded by a recent series of controversial, liberal-sounding statements coming not from retirees but from the active-duty military command, including the chief of staff, deputy chief of staff and chief of military intelligence. And the politicians are beginning to hit back.

That’s the background to the town hall appearance by Likud heavyweight David Bitan and the furor that followed. “There is a problem inside the Mossad and Shin Bet,” Israel’s main security agencies, Bitan said. The problem is that the heads of the two agencies repeatedly wind up as “leftists” upon retirement.

“Over the years something happens to people who serve as Mossad or Shin Bet directors,” Bitan said, according to a report in the conservative daily Israel Hayom. “I believe that during their term in office they develop leftist political views.”

Yesh Atid lawmaker Yaakov Perry, a former Shin Bet chief, said Bitan’s words were “meant to do nothing but cover for the stagnation and passiveness plaguing government policies.”

Ironically, it was Perry who first argued publicly, in the 2013 documentary “The Gatekeepers,” that heading a security agency “turns you into a bit of a leftist.”

Visiting Perry in his Knesset office a few days later, I asked why he objected to Bitan’s statement, when it echoed his own. “The difference,” he replied, “is that he’s using ‘leftist’ as a derogatory term.”

In a way, though, Perry and Bitan are both right. The startling fact is that military expertise, familiarity with Israel’s current capabilities and its neighbors’ intentions, seems to lead Israel’s defense professionals almost unavoidably to the prescriptions identified with the left. The outlook of the right, though popular with the public, has almost no support among the professionals.

In a way, the Israeli right seems to have fallen into the same trap in its attitude toward its security leadership that the American right has adopted toward climate scientists and the British right holds toward European Union economists: utter distrust of the experts. And like America’s climate scientists and Britain’s economists, Israel’s security professionals are becoming frantic as they see their country barreling over a cliff.