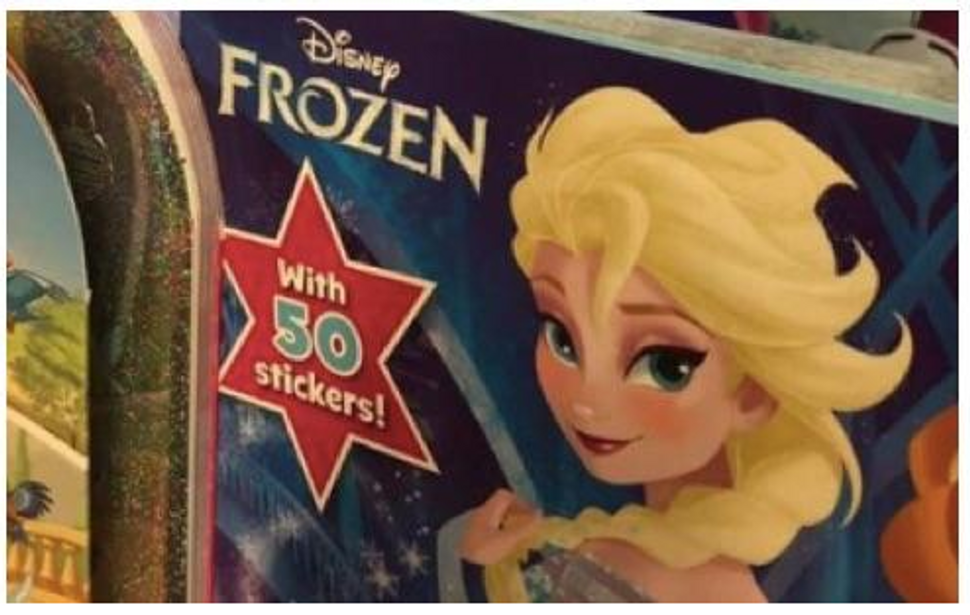 Nothing’s sacred anymore in this election cycle. Not even Elsa and Anna.

The two beloved characters from the Disney movie “Frozen” were the subjects of a Wednesday night tweet by Donald Trump. He wanted to know why nobody was kicking up a fuss over the six-pointed star on a bit of “Frozen” merchandise. He wrapped up his tweet with his favorite mantra: “Dishonest media!” 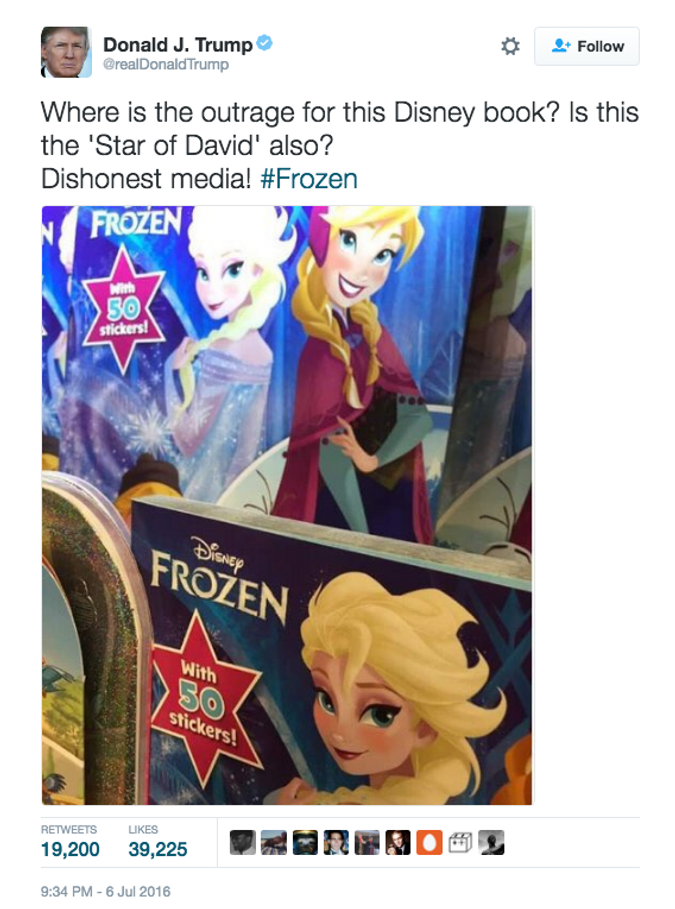 In case you missed it, here’s the background: Over the 4th of July weekend, Trump crossed a line by disseminating anti-Semitic content on his own Twitter account. This wasn’t a retweet from one of his skinhead supporters’ accounts — it came from The Donald himself. The tweet in question contained a meme, farmed from an alt-right Reddit board, calling Hillary Clinton the “most corrupt candidate ever!” The phrase was within a six-pointed star and the backdrop was a pile of money. The first impression of many who saw the tweet was that it was anti-Semitic, and its origins only proved that initial inclination.

That tweet was unquestionably anti-Semitic. Trump’s followers understood a dog whistle when they saw it; its content played to almost every stereotype of Jews: corrupt, money-hungry and rich. While Clinton isn’t Jewish, she is seen as a tool of the Jewish conspiracy by the alt-right. 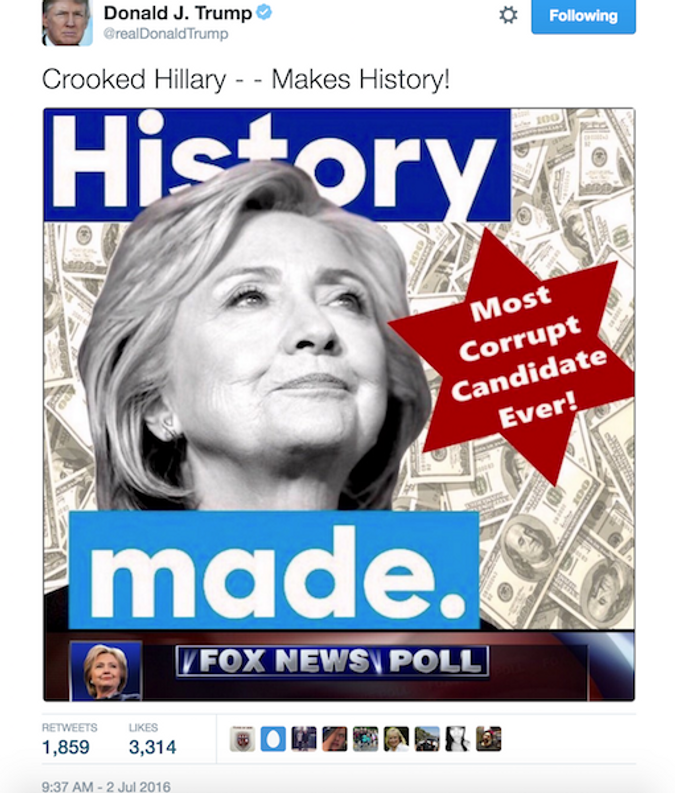 In response to the outrage, Trump’s team deleted the tweet, though without anything resembling an apology. Yesterday during a speech (which, if Trump were a rational candidate, would have been devoted to FBI Director James Comey’s comments about Clinton’s “extreme carelessness” with classified emails), Trump doubled down on the tweet, stating that the outrage was manufactured by a “dishonest media” and that those who were offended were showcasing their own biases by reading into the star and the tweet’s message in the manner they did.

And then, reaching hitherto unheard-of levels of bizarre wackiness (even by The Donald’s standards!), Trump dragged the “Frozen” gals into it.

It just goes to show that facts no longer matter in this election cycle. It’s no matter that we know where the meme came from — that it was created by anti-Semites with the expressed purpose of perpetuating anti-Semitism. Trump would like for you to ignore that fact, and instead think the outrage is just because we have a dishonest media.

In addition to the alt-right’s stereotypes about Jews being rich and corrupt, one more theme runs through the alt-right’s hatred of Jews in particular: the idea that Jews control the media. As a member of the press, I’m a main target of their hatred, and one of the central themes to these messages I receive is that “my people” control the media and its coverage of Trump in particular.

Even with Trump’s denial that the meme he posted was anti-Semitic (which, again, it was, as a point of fact, given its origins), he has sent yet another dog whistle to his alt-right supporters. In a speech in which he stood up and refused to apologize for his tweet, expressed frustration it was even deleted, and then accused the “dishonest media” for reporting on the story, the alt-right received a very clear message from their presidential nominee.

Never mind that this tweet was sent on a holiday weekend and few in the media were working, and thus few substantive stories were even filed until the Monday after. Never mind that the story has only grown legs because Trump refuses to stop talking about it. Never mind that we know exactly who created the imagery found within the tweet and why. Trump would like non-racist observers to ignore all of these facts.

But one group of people who aren’t ignoring these messages are his alt-right followers. They aren’t missing a single signal sent by the Trump campaign. It might be unclear at this point whether Trump is sending them inadvertently or intentionally, but it’s painfully obvious that Trump not only enjoys having the support of the alt-right, he also enjoys throwing them a bone.

And once they’ve got a hold of that bone, you can be sure as hell they’re not going to “let it go.”