Why Benjamin Netanyahu Is Suddenly Looking Like a Diplomatic Superstar 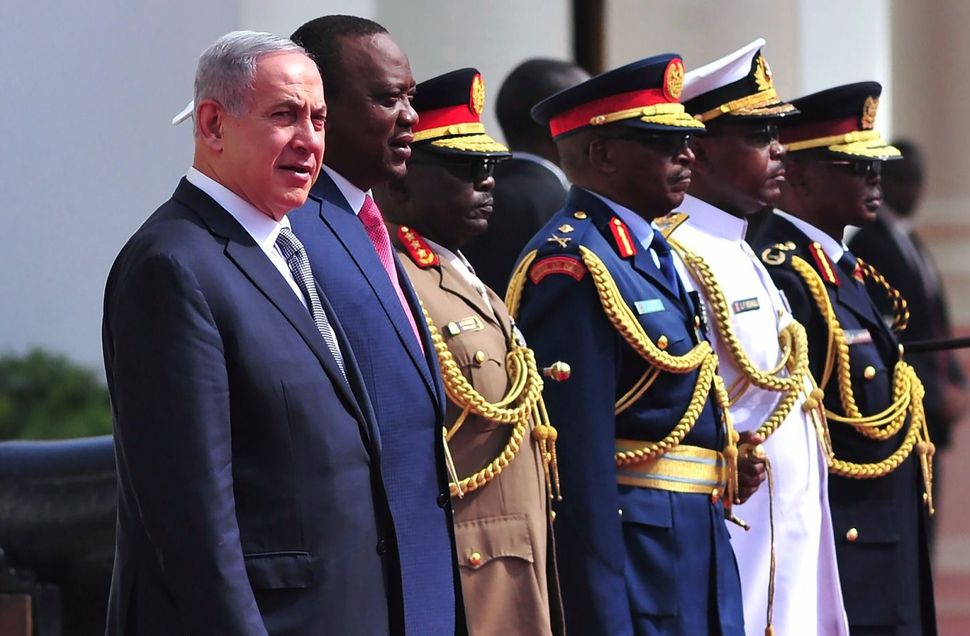 Israel’s chattering classes had a field day in early July savaging Prime Minister Benjamin Netanyahu over his four-day, four-nation African tour. With an entourage filling four jumbo jets, a price tag some put at $7.3 million (the prime minister’s office said it was just $3.25 million), plus more pomp and circumstance than a Viennese operetta, it was one of the costliest junkets ever by an Israeli leader.

Expensive travel is one of Netanyahu’s most criticized peccadillos. His longest-running legal headache is a decade-long expense-padding investigation tellingly dubbed Bibitours. The Africa trip simply confirms the critics’ image of Netanyahu as a self-indulgent braggart who’s in constant motion to avoid going anywhere.

By any objective standard, though, the Africa trip, July 4 to 8, was a major diplomatic success. Even some of Netanyahu’s harshest critics admit privately that the trip — the first sub-Saharan Africa visit by an Israeli leader since 1987 — capped a string of diplomatic successes. Taken together, they’re transforming Israel’s international standing.

Admittedly, it’s a triumph with an asterisk. One of the main effects of Netanyahu’s successes is to blunt international pressure for compromise with the Palestinians. Given the widely-held belief, at least among Israel’s security leadership and much of its foreign policy establishment, that inaction is leading Israel inexorably toward a single Israeli-Palestinian state, either non-Jewish or non-democratic, the diplomatic triumph might be called suicidal. Still, it’s undeniable that Netanyahu is accomplishing what he wants.

It’s this: Africa is just one notch on Netanyahu’s diplomatic belt. His relationship with Russia’s Vladimir Putin is closer than any Israeli and Russian leader have ever had. Among other things, their understandings help Israel steer clear of the crisis in next-door Syria.

Looking westward, the Israeli leader has forged a close link with Greece’s Prime Minister Alexis Tsipras. The relationship covers military as well as trade, energy, water, migration and other shared interests. It’s all the more remarkable given the previously anti-Israel stance of Tsipras’s radical-left Syriza party.

The warming of the once-frosty relationship began in 2010, early in Netanyahu’s tenure, when he reached out to Greece’s then-premier George Papandreou. Since Tsipras took office last year, however, it’s become a full-fledged bromance.

What’s more, Netanyahu and Tsipras have held several three-way summits with the conservative president of Cyprus, Nikos Anastasides. They’ve formed what amounts to a new regional bloc with military, economic, social and other aspects, including plans for transport and use of Israel’s offshore natural gas. Just below the surface are the three countries’ tense relationships with Turkey.

Greek-Turkish tensions go back centuries. Cyprus-Turkey enmity is decades old. Israel, by contrast, had close ties with Turkey, its strongest Muslim ally, going back to Israel’s founding in 1948. Ties began gradually souring after the Islamist AKP party took over Turkey in 2002, then collapsed following Israel’s 2010 naval raid on a Turkish civilian flotilla headed for Hamas-ruled Gaza. Nine Turkish citizens were killed in the raid.

In June, however, Netanyahu finished three years of rocky negotiations with an agreement to restore full Israeli-Turkish ties. The pact is a delicate web of overlapping interests. Israel can ramp up its once-robust ties with Turkey’s military. Turkey will provide humanitarian aid to Gaza, including a new hospital and power plant, thus burnishing Turkey’s Islamist credentials. Israel gains a new intermediary with Gaza’s Hamas rulers, who aren’t going away any time soon. Turkey hopes for a share of Israel’s natural gas. Israel won a Turkish promise to ban Hamas terror operatives from its territory.

Oddly, Turkey reportedly sees Israel also as a helpful ally in restoring its frayed ties with the region’s pragmatic Sunni Arab states, including Egypt and Saudi Arabia. That speaks volumes about the strength of Israel’s clandestine ties with those Arab states, nominally Israel’s enemies but linked by shared fears of Iran and global jihad.

The Turkish pact was hugely controversial with the Israeli public, mainly for what it didn’t include — a Turkish promise to help return two Israeli citizens and two soldiers’ bodies held by Hamas. Nonetheless, Netanyahu muscled it through his balky cabinet with only limited resistance.

Arguably the capstone of Netanyahu’s diplomatic success, though, was the July 10 visit to Jerusalem by Egypt’s foreign minister Sameh Shoukry, the first such visit since 2007. Israeli-Egyptian contacts are usually conducted by low-level diplomats or high-level security officials, so a top civilian visit represents an important symbolic step toward long-delayed normalization in the two countries’ ties.

Publicly, the purpose of the visit was to advance the Israeli-Palestinian peace initiative launched by Egyptian President Abdel Fattah a-Sisi in a May 17 speech. Shoukry had been in Ramallah in late June to discuss the initiative with the president of the Palestinian Authority, Mahmoud Abbas. Netanyahu has publicly welcomed Sisi’s effort, though there’s little indication that the sides are anywhere near agreeing on peace terms.

But according to several well-placed Israeli diplomatic and intelligence sources I spoke to, the main reason for Shoukry’s visit wasn’t the Palestinians but Africa. Egypt is deeply alarmed by a massive Ethiopian project to dam the headwaters of the Nile River, Egypt’s lifeline. Ethiopia claims the project, the Grand Ethiopian Renaissance Dam, slated to be the largest in Africa, is intended solely to generate electricity and won’t reduce the river’s flow. Egypt, desperately short of water, doesn’t believe it.

The sources I spoke to say Egypt asked Israel to mediate the dispute. It was a key item on Netanyahu’s African agenda. I haven’t gotten any official confirmation, though the timing of Shoukry’s Jerusalem visit, two days after Netanyahu returned from Africa, offers some support. If true, it would represent an astonishing change in Israel’s status, from international pariah to trusted mediator between two African neighbors, one of them a nominally Marxist regime, the other the Arab world’s largest nation.

There’s no question that Sisi places high priority on his Israeli-Palestinian initiative. He reportedly launched at the urging of former British prime minister Tony Blair. It includes important concessions by the Saudis and the Arab League in return for significant Israeli concessions on the ground in the West Bank.

Blair and Sisi were counting on Netanyahu bringing Isaac Herzog and his Labor-led Zionist Union into his coalition in order to assure cabinet approval for the process. When those talks collapsed, Netanyahu promised Sisi that he could still deliver. Shoukry’s visit was meant in part to test that promise.

Importantly, the Sisi initiative gives Israel some steps toward regional normalization in parallel with Palestinian talks, rather than afterward as the original Arab Peace Initiative envisions. Nobody has any idea how Netanyahu’s Israel and Abbas’s Palestinians can reach an agreement now, and the world can’t wait for a miracle. So they’re settling for a process with no visible end-point. It’s one more sign of Netanyahu’s greatest triumph: forcing the world to accept him as he is.

Why Benjamin Netanyahu Is Suddenly Looking Like a Diplomatic Superstar