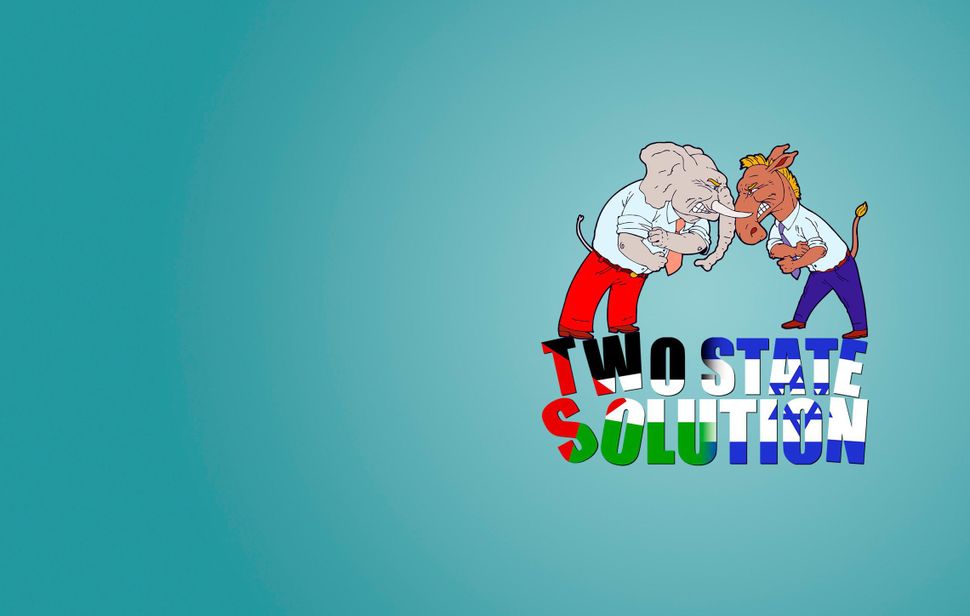 One ad focused on Cornel West, the firebrand who called Israeli Prime Minister Benjamin Netanyahu a war criminal, another on the Arab-American activist James Zogby, and the third on U.S. Rep. Keith Ellison, claiming that he supports Hamas. All three served on the 15-member committee drafting the platform for the Democratic National Convention.

“Sadly, this isn’t the Old Democratic Party,” each of the ads intoned as a blurry photo of John F. Kennedy morphed into a smirking Hillary Clinton. “It’s today’s Democratic Party.”

Oh, the irony. The “radical” positions of West, Zogby and Ellison — who were chosen by Bernie Sanders for the platform committee — were later soundly defeated by Democrats. Instead, it’s the GOP that has broken with the long-standing bipartisan approach to the Israeli-Palestinian conflict by rejecting a call for a two-state solution and further rejecting “the false notion that Israel is an occupier.”

Sadly, this isn’t the Old Republican Party anymore. While a party platform is a largely symbolic document, this development puts to rest the notion that a common vision of what’s best for Israel’s future is shared across the political spectrum.

Liberal Democrats are increasingly concerned more about the plight of the Palestinians than about the needs of Israel, and conservative Republicans are increasingly skeptical that there’s a way for Israel and an independent Palestinian state to coexist peacefully. In a recent Pew Research Center poll, 61% of Democrats believed a two-state solution was possible; only 38% of Republicans did.

This gulf has been building for some time, of course. President Obama, determined to forge a Middle East peace agreement, entered office reckoning that he’d hasten that agreement by creating “daylight” between himself and Netanyahu. The prime minister exacerbated their differences by openly defying Obama, first on expansion of settlements and then on the Iranian nuclear deal. Meantime, liberals (especially young liberals) are growing impatient with an Israeli government that seems not to budge on dealing with a Palestinian occupation that is now nearing the half-century mark.

But the political implications of this divergence are lopsided this year. Growing Democratic concern for Palestinians has not forced a change in language in the proposed party platform under Candidate Clinton. In fact, Democrats recently voted to reject an amendment to the platform that would have called for an end to occupation and illegal settlement building.

Under Candidate Trump, however, the Republican Party seems unmoored. With the apparent acquiescence of the presumed nominee, the GOP flat-out rejected endorsement of a two-state solution, which has been the official policy of U.S. administrations under both parties for decades and has been supported, at least rhetorically, by Netanyahu himself.

Even though the American Israel Public Affairs Committee, the powerful Israel lobby, has veered to the right politically — vociferously and unsuccessfully opposing the Iran deal, for instance — its embrace of a two-state solution was roundly ignored by the Republican platform writers. AIPAC is now philosophically closer to the party of Obama and Clinton on this key issue. And the Republican Party has positioned itself to the right of Netanyahu. Who could have imagined that?

Ironies aside, this move does not bode well for Israel or for American Jews.

If the Middle East stalemate continues, faith in a peaceful resolution to grant Palestinian sovereignty while ensuring Israeli security will further erode, with pressure from both left and right. Clinton’s forces may have forestalled a major shift in her party platform this year, but brewing resentment toward an unending occupation leaves that position understandably vulnerable.

Meanwhile, the Republicans are clearly wooing evangelical Christian conservatives by means of the shift on Israel (and so many other reactionary changes in the platform) How else to explain the new language in the GOP plank that describes support for Israel as an “expression of Americanism” — whatever that means?

Israeli settlement expansion and the debilitating vacuum in Palestinian leadership have made a two-state solution less and less viable. The critics’ doubts are warranted. Trouble is, no one — on the left or the right — has offered a compelling alternative, and distrust in any resolution only furthers the possibility that in the long term, either the Palestinians will never get their own state or the Israeli Jews will lose theirs.

Republicans are playing with fire here. Democrats should steer clear of the flame.