Can You Spew Sexism and Homophobia and Still Be Rabbi for ‘Most Moral Army in the World’? 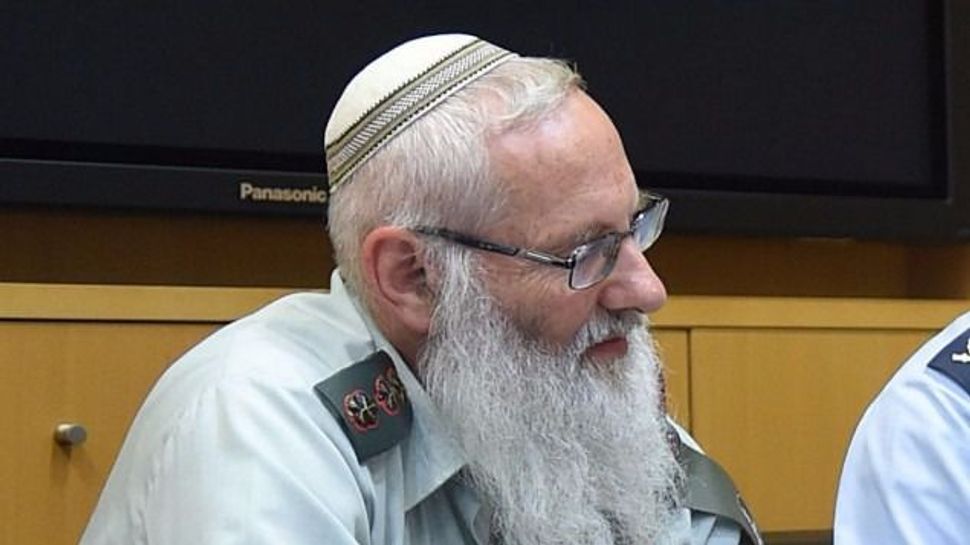 Another sexism scandal involving a male authority figure erupted in Israel on Monday, when it emerged that the army’s choice of new spiritual leader had previously implied that it was permissible for IDF soldiers to rape non-Jewish women during wartime.

Rabbi Col. Eyal Karim is on his second round of scrutiny for this suggestion, which he originally made in 2002. In 2012, when his his comments resurfaced for the first time, Karim sought to temper the storm by claiming that his musings on rape were meant only theoretically, and not practically. Four years later, Karim is in line for promotion to chief rabbi of the self-proclaimed “most moral army in the world.”

In the wake of the fresh controversy, the Israeli media unearthed a further array of bigoted and misogynistic comments Karim has made, including stating his absolute opposition to women’s recruitment to the army, and claiming that they are not fit to testify in court due to their “sentimental nature.”

He has also held forth on terrorists, to whom he referred as “animals”; the New Testament, which he said should be burned for being the work of heretics; and LGBTs, calling them “sick or disabled” — which is somewhat at odds with the gay-friendly image the IDF, and Israel in general, like to project.

Karim renounced his comments on rape again this week, as well as those on women in the army, a retraction the IDF publicly accepted in its own statement. At the same time, however, the military announced it had been unaware of many of Karim’s comments when it nominated him, and then went and re-endorsed him anyway. This makes the sequence of events even worse, because it suggests that the IDF was compelled to pay special attention to the remarks of a candidate who implicitly condoned rape and demeaned, objectified and dehumanized anyone who is not a heterosexual Jewish male, and simply shrugged its shoulders and went, “meh.”

But Karim’s appointment is not only dangerous because it reaffirms the message that one can make violent, racist, sexist and homophobic statements and still get promoted to Israel’s highest public offices. His nomination must also be seen in the context of a society in which convictions and allegations of sexual assault and harassment of women by high-profile and powerful men — from senior politicians to high-ranking army officers, town mayors and celebrities — enter the headlines with alarming regularity.

The IDF alone received 12 reports of suspected rape and 125 reports of suspected sexual assault or harassment in 2015. Almost all of the 32 female members of the Knesset have experienced some form of sexual harassment, including at least two while serving in parliament. Recurring accusations of sexual harassment in the police force were met with new police chief Roni Alsheikh’s order that anonymous complaints be disregarded. Ex-President Moshe Katsav, serving jail time after being convicted of rape and sexual harassment, has reportedly just been recommended for early release despite expressing no remorse for his actions.

The crisis is not restricted to Israel’s upper echelons and institutions. An alleged October 2015 gang-rape in a central Tel Aviv bar ended without prosecutions, despite the incident having been caught on camera. Main thoroughfares in the same city are littered afresh almost every night with business cards advertising sex services. A 2012 government survey found that one in every three Israeli women will be sexually assaulted in their lifetime. Rape culture is alive and well, as it is across the world. And despite previous strides in battling sex trafficking, 2015 saw a rise in the number of women trafficking victims in Israel.

The Israeli media pedals from one incident to the next, and while each fresh case sends a little bubble of national discourse on the issue to the surface, it soon pops soundlessly and disappears again. The only time Prime Minister Benjamin Netanyahu has publicly addressed the topic of rape was when he sought to make political capital out of the alleged assault of an Israeli woman by a Palestinian minor — a charge that turned out to have been fabricated.

This environment, in which women’s control over what happens to their own bodies is so easily lost, is exacerbated by the fact that an intrinsically patriarchal organization forms Israel’s backbone. The military is the most trusted and — aside from the education system — most widely-served institution in the country; the army and society are each other’s keepers.

This creates profound challenges for the protection of women’s rights. And the fact that for half a century the IDF has been an occupying power only deepens the problem. Maintaining and expanding an occupation in the way Israel does teaches entitlement at its most insidious and dangerous. It is the same mentality of entitlement we see repeated time and again in the violation of women’s bodies and rights by men. And it is in one of the key positions of this very same institution that Karim, a serial chauvinist, is set to be installed.

But then again, perhaps all of this is unfair. Perhaps these are just the rantings of a sick and sentimental woman.

Natasha Roth is a writer and blogger at +972 Magazine.

Can You Spew Sexism and Homophobia and Still Be Rabbi for ‘Most Moral Army in the World’?