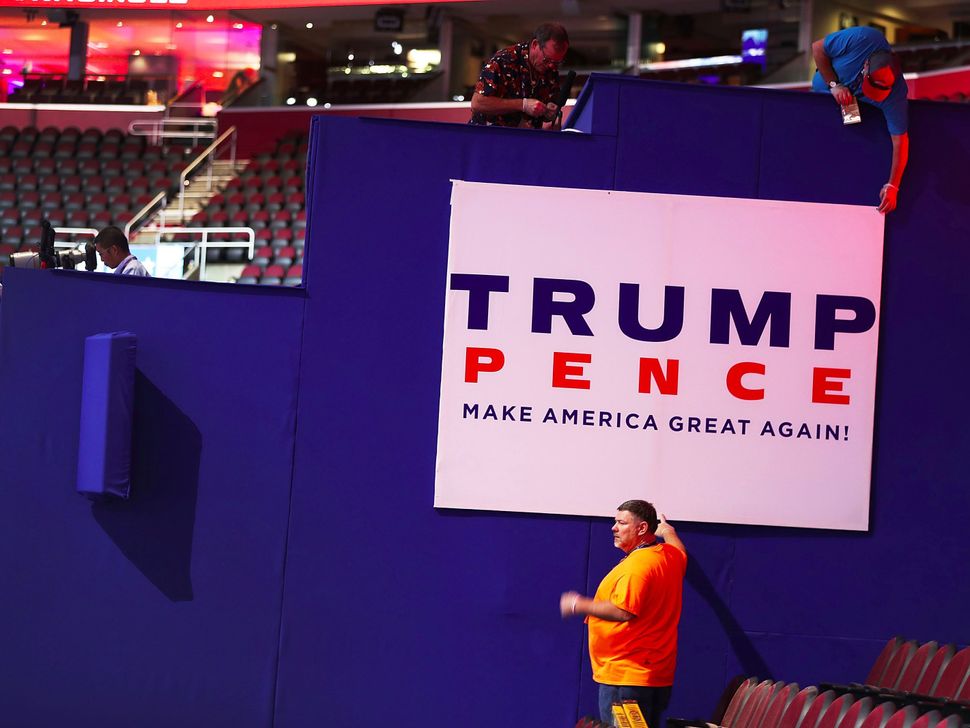 Remember that thing where the Republicans lost the presidency in 2012 and Republican National Convention Chairman Reince Priebus was all about giving the GOP a makeover to appeal to the youth, minorities, non-Christians, women and more progressive-leaning voters?

Yeah, that never happened. And the GOP’s recently released 2016 platform is the most conservative, anti-progressive thing to come out of a gathering of Republicans in recent memory.

Here’s a run-down of the stated positions that are most troubling if you don’t happen to be a white, Christian, cisgender heterosexual man.

Are you one of the many who breathed a sigh of relief when the U.S. finally crossed over into the right side of history and legislated that all people, regardless of their gender, should be able to marry? Well, too bad. The GOP is gunning hard to overturn Obergfell v. Hodges, the historic ruling that essentially legalized gay marriage. The platform calls same-sex marriage an “assault on the foundations of our society,” and defines marriage as a “union of one man and one woman…entrusted with the rearing of children and the transmission of cultural values.” This stands to do direct harm to the progress being made toward equality, including work done by the many Jewish movements that celebrate same-sex marriage.

Speaking of the “union of one man and one woman,” the GOP made a point of clarifying that the “loving and stable home” they stated was the best place for a child to grow up in is specifically one in which there is a “mother and a father” — a pretty obvious jab at same-sex families and same-sex adoption. I suppose they’ll have to get that memo to all the kids being raised in happy, healthy same-sex families.

Openly gay delegate (and genuinely politically confusing human being) Rachel Hoff asked the platform to acknowledge that LGBTQ people were victims of ISIS, literally standing in front of the committee and saying that even if they didn’t support gay marriage, could they “at least support our right not to be killed?” The answer, apparently, is no. The committee voted specifically to strike any mention of LGBTQ victims from their sections on ISIS.

Conversion “Therapy” is a type of medically unsanctioned, faith-based programming that attempts to suppress same-sex attraction and identity, often resulting in extraordinary harm. Recently, a New Jersey court banned one such Jewish Conversion Therapy center, JONAH, and organizations like it. If the GOP gets its way, parents will be free to send their kids to get repression-programmed in no time.

5) Transgender People Have To Use the Wrong Bathrooms

Continuing the very strange Republican obsession with where trans people pee, the platform makes sure to mention that the current administration’s opinion — namely, that schools should allow students to use the bathroom that matches their gender — is “illegal and dangerous” and “alien to America’s history and traditions.”

6) Control Female Bodies at All Costs

Though this should be surprising in 2016, it isn’t: The GOP platform calls for, ideally, no abortion access, making no mention of exceptions for rape, incest or the health of the mother. However, in line with the actual post-Roe v. Wade reality of the world, they will settle for doing everything they possibly can to restrict access to reproductive rights, rallying to defund all health care that includes any abortion coverage, imposing mandatory waiting periods and parental consent, and imposing scientifically un-backed “fetal pain” laws that severely restrict abortion access. They also make a point of enforcing “health-protective clinic regulation,” otherwise known as the calculated attempt to wipe out reproductive health centers with deliberately needless regulations. Oh, and of course, this is all done in order to “affirm the dignity of women.”

7) Voter Fraud Is Totally a Thing

8) We Are Actually Supporting Trump’s Wall

One of the most untenable things espoused by Trump on the campaign trail is his notorious wall along the border with Mexico. Despite party officials shrinking away from Trump’s wall claims earlier in the game, the language of the platform actually supports said wall, calling for a barrier against “the entirety of the Southern border” (though there are, as of yet, no claims that Mexico will pay for it). Regarding undocumented immigrants, the GOP refuses all amnesty, and threatens to pull federal funding from sanctuary towns and colleges that provide access and in-state tuition.

9) Christians Are Under Attack

Much of the rhetoric of the platform echoed the sentiment that, despite forming the vast majority and despite having ample lobbying and legislative power, “religious people” (read here: Christians) are “being driven out of the public square” by “liberal elites” — a dog whistle if ever I heard one. Problematically, the GOP uses this persecution complex in the platform to call for an end to the compulsion of “faith-related institutions, as well as believing individuals, to contravene their deeply held religious, moral or ethical beliefs regarding health services, traditional marriage or abortion” — AKA, advocating for the right to discriminate against gay people, refuse to do your job as a healthcare provider or government clerk and/or to provide full healthcare for your workers.

10) Legislate as a Christian, Not as an American

According to the platform, lawmakers are directed to use religion as a legislative guide, with “man-made law” consistent with laws that are “God-given.” And, in case you had any question about which religion they’re talking about, the platform also advocates for teaching the Christian Bible in public schools, as it is a central text “indispensable for the development of an educated citizenry.”

So much for a makeover, GOP.

If you’re one of the many people to whom these stances are not appealing, at least now you know what you’re up against.