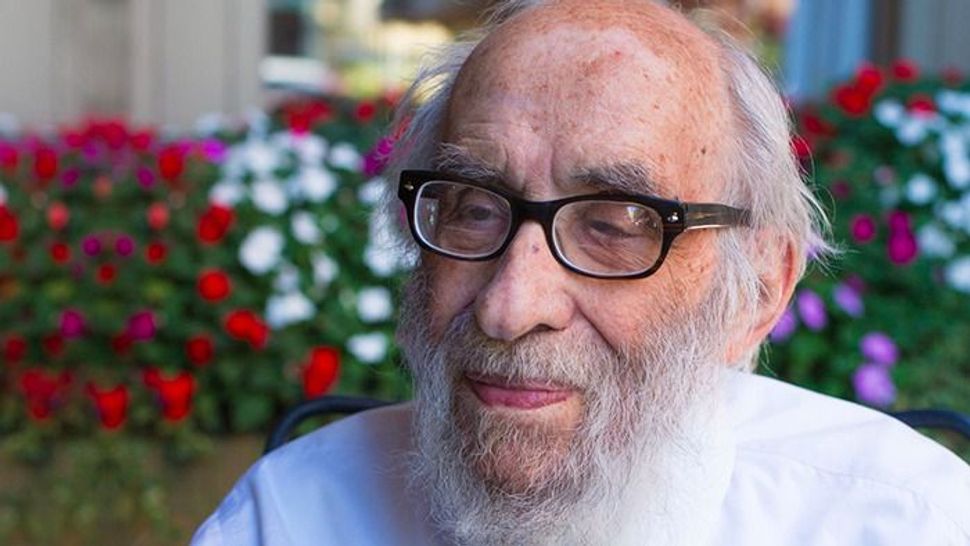 One day in mid-June, I borrowed a car from my dad and drove my daughter, now 18, to the Jewish Reform Movement’s Camp Eisner in the Berkshires where she is spending the summer as a lifeguard/counselor, having spent all but one of the past eight summers there as a camper. Afterward, I continued on towards Waltham, Mass., where I was to spend ten days at Brandeis University and another ten in Israel, thanks to the largesse of the Schusterman Foundation, studying the role that Judaism and Jewishness plays in contemporary Israel and the Israel/Palestinian conflict. (I am writing a book on the latter topic.)

Two weeks or so later, I was in Israel, attending one of the Schusterman seminars and multitasking on my laptop, when I learned from the Forward of the death, at age 94, of Rabbi/Professor Max Ticktin. I had not spoken with Max in over 25 years. But it occurred to me that without him, I would not be where I was, doing what I was doing, and neither would my daughter. The reason, believe it or not, was an adult education class — one that somehow changed my life.

Max had been a Hillel rabbi at George Washington University for long time, but for me, this would have been a reason not to take a class with him at the time. I had attended Cornell as an undergrad and Yale as a master’s student, but I had never set foot in a Hillel. I had, just barely, a Hebrew School education leading to Bar Mitzvah, but had found the experience so alienating I had stopped attending services except when my parents absolutely forced me to. (I skipped Kol Nidre 1979 for a Bruce Springsteen concert, but otherwise the fight was not worth my parents’ hurt feelings.)

The version of Judaism taught to kids like me in the 1970s went something like this: “The goyim have always wanted to murder us. They almost succeeded in the Holocaust. So you had better defend Israel no matter what.” The rest was all commentary and none that I found interesting or inspiring.

My parents had sent me on Israel teen tours at age 14 and again at 16. And I had even chosen to spend a semester at Tel Aviv University as a college sophomore four years after that. I cared deeply about Israel and wished it would stop mistreating the Palestinians so egregiously. I argued constantly about the conflict with people from both sides. I published articles denouncing American Jewish leaders for failing to help Israel live up to its own professed moral standards in the aftermath of Sabra and Shatilla (infuriating my parents). I returned to Israel in the late 1980s to report on the first Intifada. It became harder and harder to defend over the years and naturally my emotional connection to it attenuated.

More to my point, I never learned anything about Judaism that offered any appeal. It was just another superstition, in my view, that had somehow managed to last longer than any of the others. The Torah was fiction — dangerous fiction at that — and services were a colossal bore. Some holidays I could take and some I could leave, but mostly they were an inconvenience, since they meant nothing to me personally but got in the way of my other plans.

I’m not sure why, exactly, I chose to take a class on rabbinical literature with Max Ticktin. I recall for certain that at age 30 or so, I had no idea what it was. The fact that he was not just a rabbi, but also head of Judaic Studies at GW, is what made it kosher for me. I would be learning from a genuine scholar rather than a religious figure who was forced to spout all kinds of nonsense as part of job.

I remember, upon buying the textbook, being shocked at how thick it was. I had never heard of any of the authors and was unfamiliar with the arguments it contained. You can guess the rest. I found it riveting. What could be more interesting — as I now tell my secular intellectual friends — than really smart people arguing at great length across time and space about the things that matter most in life?

Max was a terrific teacher and was open to my generally hostile questions about why any of these people should be taken seriously today. Weren’t they sexist, chauvinist, racist, ethnocentric, etc? The answer was always “Yes, but…” and it was the “but” part that was so interesting.

When the class ended I wanted more, so I joined the Fabrangen havurah that Max had helped get started, going in time usually to miss most of the services but to listen to the sermon and meditate on what really mattered in my life. There I found a Jewish community of people whose ideas were close enough to mine that my alienation began to alleviate. Not long afterward, I left Washington to get my doctorate in U.S. history at Stanford, but to my own amazement, I chose to minor in Jewish studies. I learned there was a whole world of knowledge, argument and moral teaching that had been kept hidden from me in Hebrew School and thereafter. Turns out there was a lot more to this Judaism than anyone had let on in the first thirty years of my life.

Since Stanford, where I was lucky enough to study with people like Arnold Eisen and Stephen Zipperstein, I have been blessed to study Torah (and Talmud, etc) with many scholars, including — to my personal shock and surprise — a number of scholarly rabbis, including especially my good friends David Gelfand of Temple Israel and Shai Held of Mechon Hadar. I still skip services, but I’ve written about Jewish issues frequently in a number of publications, both Jewish and secular. I teach American Jewish history and culture at Brooklyn College and have done so at the Macaulay Honors College at CUNY. I’ve started one book on the cultural history of American Jewry and another on the history of the Israel/Palestine debate in the United States. I’ve even, with three colleagues, helped start a study group that seeks to bring together religious scholars with Jewishly-interested secular ones in the hopes of duplicating, in a small way, my own experience.

It’s fair to say I spend as much time studying and thinking about Judaism and Jewish-related issues as I do any other topic in my personal and professional life. And of course, I feel I’m only just beginning. The topics may not be infinite, but they sure feel that way.

When I read Arthur Waskow’s beautiful appreciation of Max Ticktin in the Forward, I learned more about the heroic life he led, and the courage he exhibited in the face of the vicious opposition and criticism he received, much of it from members of the Jewish establishment who sought to silence him. But as Waskow pointed out, Max had his Torah and he lived it. And thanks to Max and — this is key — to my taking an adult education class over 25 years ago, I have my Torah. It’s not the same one, exactly, and I don’t live it nearly as well. But I’m doing my best to pass it down to my daughter at Eisner and hoping she will do the same for her children someday.

I hope Jewish professionals of all kinds can find some lesson, if not in my experience specifically, then in the no doubt thousands of people whom Max and others touched with the gift of Torah, generously defined. May his memory be a blessing…and a lesson.

Eric Alterman is CUNY Distinguished Professor of English at Brooklyn College, the “Liberal Media” columnist for The Nation, a Senior Fellow at The Nation, and the author of ten books.