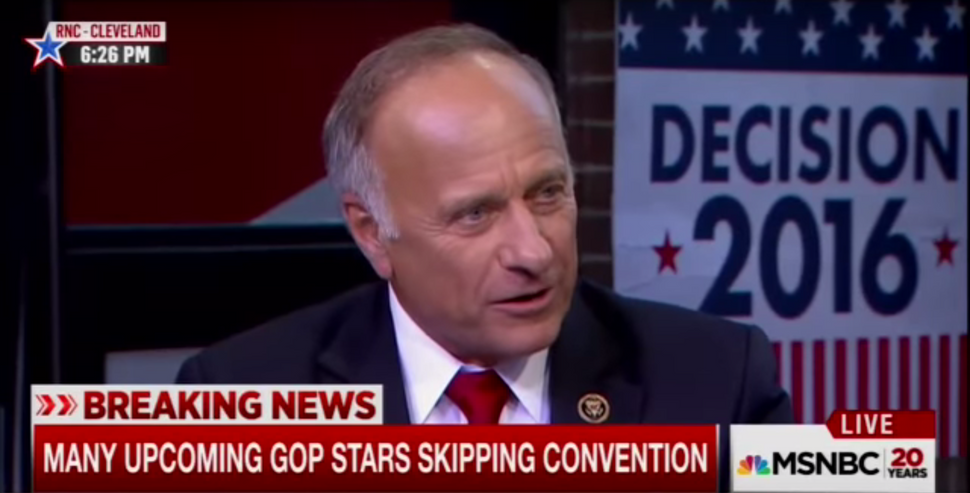 What do you do when your political party gets described as mostly “old white people” on national television? If you’re Rep. Steve King of Iowa, you go full-on, double-barrel white supremacist.

Speaking on a MSNBC news panel discussion on Monday, King took issue with the suggestion that soon there won’t be enough white people to elect Republicans to national office. Apparently oblivious to the country and century in which he lives, he said, “I’d ask you to go back through history and figure out where are these contributions that have been made by these other categories of people that you are talking about? Where did any other subgroup of people contribute more to civilization?”

For a moment, the sitting U.S. Congressman’s breathtakingly bald-faced racism left the panel members speechless. When they recovered, the conversation devolved into a shouting contest, with host Chris Hayes cutting the segment short and going to commercial break.

In the furor over the congressman’s remarks, it was easy for people to miss how King followed up his racist “subgroup” comment with a statement tying the superiority of white culture to Christianity. King argued for the supremacy of Western civilization “that’s rooted in…every place where the footprint of Christianity settled the world.”

Let’s set aside for the moment the fact that, throughout history, the “footprint of Christianity” often took the form of a boot mark left on the back of Jews and people of color. Let’s recognize that Donald Trump, by openly demonizing Mexicans, Muslims and many other groups, has emboldened people like King to directly engage in racism. And then let’s realize that King’s racist comments on MSNBC serve to reinforce one of the truly important lessons of this election cycle: If nothing else, the rise of Trump has proven that white supremacy almost always lives next-door to Christian hegemony — and that one form of bigotry will always bolster another.

This is not new. The folks who target blacks and Latinos inevitably target Jews and Muslims. And vice versa. Consider this old Trump chestnut, recalled by a former casino executive: “Black guys counting my money! I hate it. The only kind of people I want counting my money are short guys wearing yarmulkes!”

In a political climate that calls on us to take sides, alliances can be hard to maintain. Some African-American activists see Jews as too enmeshed in the white power structure. Some Jews take issue with the Black Lives Matter movement’s support for Palestinian liberation. But with the hate speech that Trump has amplified and projected, the stakes are too great for us to demand ideological purity from one another.

While Trump is obviously wrong that “the African-Americans love me,” it’s clear that the neo-Nazis do. All of us “subgroups” who stand outside of “Western civilization” are in danger.

If we’re going to stand against this rising tide of hate, we’ve got to stand together. So let’s keep building bridges. Surely that’s something even we lowly “subgroups” can contribute.

Rabbi Michael Rothbaum is Bay Area Regional Co-chair for Bend the Arc: A Jewish Partnership for Justice. Follow him on Twitter @Rav_Mike