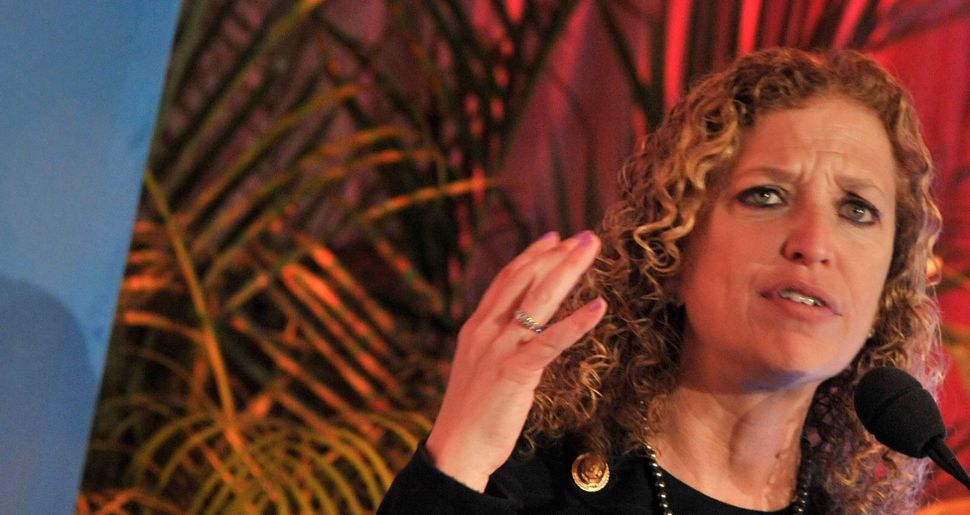 It was around this time last year that I first waded into coverage of the 2016 presidential race for this newspaper, asking whether Vermont Senator Bernie Sanders, a democratic socialist, was being subjected to anti-Semitic treatment from his critics. The short answer was that in some cases yes, in some cases no, so we better just be on our guard and see.

Well, now a cache of emails coming from the Democratic National Committee and leaked by WikiLeaks is being heralded as proof that the party, which swore to be indifferent to the race and favor no candidate, actively campaigned against Sanders in favor of the establishment-backed Hillary Clinton. And Debbie Wasserman Schultz, the DNC chairwoman and standard-bearer for Jewish Democrats, has announced her resignation in light of the email scandal.

In one particular email from DNC CFO Brad Marshall, there’s clear evidence that the party wanted to use Sanders’s Jewishness and his alleged atheism against him in states with plenty of religious Christian voters.

“It might may no difference [sic], but for KY and WVA can we get someone to ask his belief,” Marshall wrote. “Does he believe in a God. He had skated on saying he has a Jewish heritage. I think I read he is an atheist. This could make several points difference with my peeps. My Southern Baptist peeps would draw a big difference between a Jew and an atheist.”

Let’s unpack this, shall we?

While this email does not prove that Marshall and his group are actual Jew haters, it does show that they view religious bigotry as a force to be leveraged against a political opponent in the field, rather than as a force needing to be confronted and destroyed at all costs.

What’s particularly troubling here is not that Marshall is saying that the Clinton campaign should overplay Sanders’s Jewishness — it’s that he’s saying they should call it into question, hoping to play off some Americans’ fear of atheists, and in this case, of how close atheism is thought to be close to socialism (although I can tell you there are plenty of religious socialists out there).

Although this is not classic anti-Semitism as we generally understand it, if you ask me it’s still discrimination of a sort, because it’s essentially saying that there is only one way to be a Jew — and that if you don’t have a certain ideology or level of religious observance, then you aren’t really Jewish.

This single standard for what counts as a Jew doesn’t harm only non-religious cultural Jews, it also harms groups who don’t conform to what gentiles often think a Jew looks like (think non-white Jews, specifically).

Sanders doesn’t seem like the religious type, but he exudes something that is so culturally Jewish among Brooklyn Jewish radicals that to question his membership in the tribe is laughable.

This leak is embarrassing to say the least. Not only will it vindicate Sanders’s fans’ belief that the game was rigged against him; it also vindicates those who think that Clinton and the Democratic machine are so more morally unbound that they would sink to using conservative states’ fears about Jews and atheists to stave off an insurgency campaign within the party.

At a time when a bona fide racist like Donald Trump is leading the Republican Party, it seems almost trivial to talk about this problem in the Democratic Party. But that’s why we need to. The blatant racism of the Trump campaign is easy enough to spot. We have to work at little harder to see the banal, under-the-radar type of discrimination that happens elsewhere.