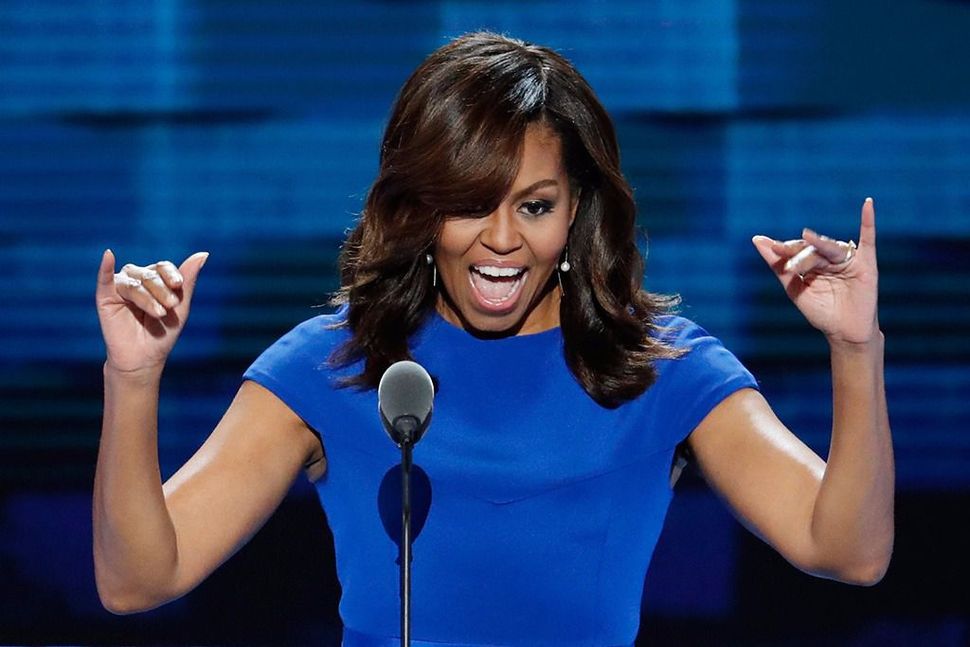 Michelle Obama absolutely blew the nation away with her front-and-center speech at the Democratic National Convention on Monday night. In a convention fraught with stressors like the Debbie Wasserman Schultz fiasco and lingering Bernie supporters in the throes of their histrionics, FLOTUS’s speech offered some much-needed unifying sentiments that the vast majority of people tuning in could get behind.

The speech was written by none other than Sarah Hurwitz, Michelle Obama’s long-time speechwriter (who also serves as a senior advisor to the White House Council on Women and Girls). Hurwitz, who’s been in the news lately for having her 2008 Michelle Obama speech ripped off by Melania Trump at the Republican National Convention, has also worked as a speechwriter for President Obama, Hillary Clinton, Senators Tom Harkin and John Kerry, and General Wesley Clark.

Though Jewish publications sometimes have the habit of reading Jewishness into the actions and motivations of people who just happen to have been born Jewish, Hurwitz has stated on multiple occasions that her Jewishness has been a central and formative source of inspirationfor her outlook on politics throughout her career. That inspiration is clear in her speeches: The values she extols and the truths she elucidates are also Jewish values and truths.

Here are four highlights from Monday night’s speech that bring this point home:

1) It’s All About the Kids, and It Takes a Village

“With every word we utter, with every action we take, we know our kids are watching us. We as parents are the most important role model… The presidency is about one thing and one thing only. It is about leaving something better for our kids. That is how we have always moved this country forward — by all of us coming together on behalf of our children. Volunteering to coach the team, teach the Sunday school class, because they know it takes a village.”

What, a Jewish speechwriter talking about her kids?

But really, this speaks to the essentially Jewish idea that nourishing and holding up the next generation is central and is the responsibility of the community as a whole. Coming together as a community to transmit values, tradition, and a sense of responsibility for creating a humane, just world is one of the main pillars of what it means to be Jewish.

2) Remember the Disenfranchised and Work To Lift Them Up: It Could Just as Easily Be You

“I want a president with a record of public service. Someone whose life’s work shows our children that we… fight to give everyone a chance to succeed. And we give back even when we are struggling ourselves because we know that there is someone worse off. There but for the grace of God go I. I want a president who will teach our children that everyone in this country matters.”

“That is the story of this country. The story that brought me to the stage tonight. The story of generations of people who felt the lash of bondage, the shame of servitude, the sting of segregation, who kept on striving, and hoping, and doing what needed to be done. So today I wake up every morning in a house that was built by slaves. And I watch my daughters — two beautiful intelligent black young women — play with the dog on the White House lawn.”

The essential takeaway here is that Never Forget means Never Forget for All. It is a Jewish responsibility to acknowledge truths, even when it enrages people who seek to deny those truths (as we saw in the case of this speech, when people on the right exploded all over the internet alleging that slaves did not build the White House. Spoiler alert: yes, they did.) Acknowledging the atrocities of the past from a Jewish lens also means working to remedy the systemic injustices that stemmed from those atrocities into today.

4) It Is Your Obligation To Act

“In this election, we cannot sit back and hope that everything works out for the best. We cannot afford to be tired or frustrated or cynical. Hear me: Between now and November, we need to do what we did eight years ago and four years ago. We need to knock on every door, we need to get out every vote, we need to pour every last ounce of passion into electing Hillary Clinton as president of the United States of America. Let’s get to work.”

There’s a quote in Pirkei Avot, the Ethics of the Fathers, that directly reflects this sentiment: “It is not your responsibility to finish the work of perfecting the world, but you are not free to desist from it either” (Rabbi Tarfon, 2:21). Is Clinton a spotless candidate beyond reproach, and will her election bring on some new era of messianic bliss? Absolutely not. There is much that she needs to be taken to task for and much that she needs to fix. But in the world where we now live, in which a dangerous, irresponsible, racist, sexist bombast with neo-Nazi supporters has a serious shot at the presidency, the work to be done is clear.