Both Republicans and Democrats Went Backward on Israeli-Palestinian Conflict. Now What? 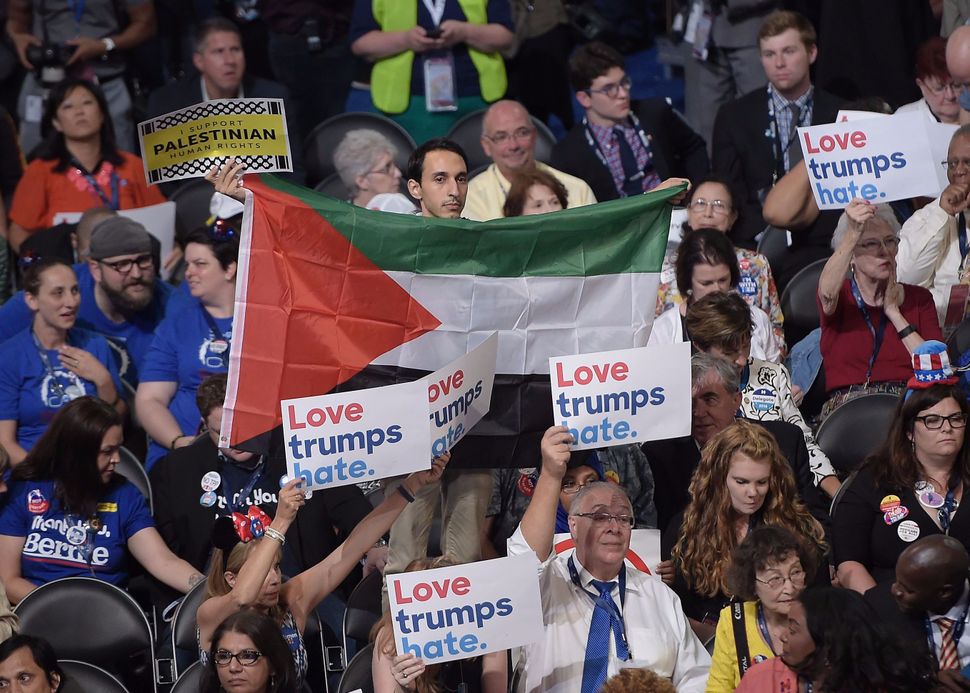 For Americans, Israelis and Palestinians who still seek a two-state resolution to the long and exhaustive conflict between Israel and the Palestinians, the platforms of the major American political parties are profoundly disappointing. Neither platform addresses the issue seriously. The failure to do so serves no one’s interests, especially not those of the United States. The disservice done to both Israel and the Palestinians is more than unfortunate; it’s laying the foundation for yet another collapse on the ground.

Only President Obama can help us now — and only if he acts fast.

The Jewish Insider reported on July 12 that “the Republican Party’s Platform Committee on Tuesday unanimously approved proposed language that drops any reference to the party’s longstanding support for the two-state solution in the Israeli-Palestinian conflict from the 2016 platform.” This, no doubt, reflected anything but forward movement.

“We reject the false notion that Israel is an occupier,” the platform’s language on Israel, introduced by GOP delegate Alan Clemmons, reads. “Support for Israel is an expression of Americanism, and it is the responsibility of our government to advance policies that reflect Americans’ strong desire for a relationship with no daylight between America and Israel.”

The Democrats did not do much better. CNN reported on July 10 that “Hillary Clinton supporters rejected an effort Saturday to add an amendment to the Democratic platform which would call for ‘an end to occupations and illegal settlements’ in Palestinian territories.” The rejection of that amendment dealt a blow to any hope that the platform would reflect and address the reality on the ground, a reality of occupation approaching its 50-year anniversary.

Not only are these positions out of line with international law and dozens of United Nations resolutions, they are also totally out of sync with U.S. foreign policy and well-established parameters that call the reality on the ground what it is: Israeli military occupation.

Given the inability of either party platform to provide a glimpse of what it would take to bring peace to that embattled region, we can only hope that other forces weigh in.

In particular, President Obama still has time to set the record straight. Given that the United States recognized Israel 11 minutes after it declared independence back in 1948, he can finally recognize the second of the two-states, Palestine, before he leaves office. This would place a policy marker that brings the two-state solution into full focus no matter who our next president will be.

As we, along with our Israeli colleague Nomika Zion, a resident of Sderot, Israel, have noted in the past:

The United States holds a key to bringing the violence to an end and putting the parties on the road to realizing what the U.S. and virtually every other nation in the world has called for, the implementation of two states, Israel and Palestine. We call on President Obama to act now and recognize the state of Palestine, a process started by Republican President George W. Bush. This single act is urgently needed in order to provide the next U.S. president with a platform that places both Israel and Palestine on equal footing, at least in terms of formal U.S. recognition.

The failure of the two American political parties to recognize the reality on the ground in the region and to provide a platform for progress on resolving the Israeli-Palestinian conflict is shameful. It leaves no hope for forward progress and will not serve the interests of the United States, Israel or Palestine. It will exacerbate tensions in the region and thus deprive Israel, the Palestinians and the world of the leadership needed to end the occupation and enable both parties to pursue life, liberty and the pursuit of happiness.

We hope that President Obama appreciates the productive role he can play in this regard, a role made all the more critical in light of the disappointing platforms of the major political parties.

Sam Bahour is a Palestinian-American business consultant from Youngstown, Ohio, living in Ramallah. Among other things, he is chairman of Americans for a Vibrant Palestinian Economy. Lewis is an American attorney and has been active in a number of Jewish organizations both in Boston and nationally. He is also a board member of AVPE.

Both Republicans and Democrats Went Backward on Israeli-Palestinian Conflict. Now What?