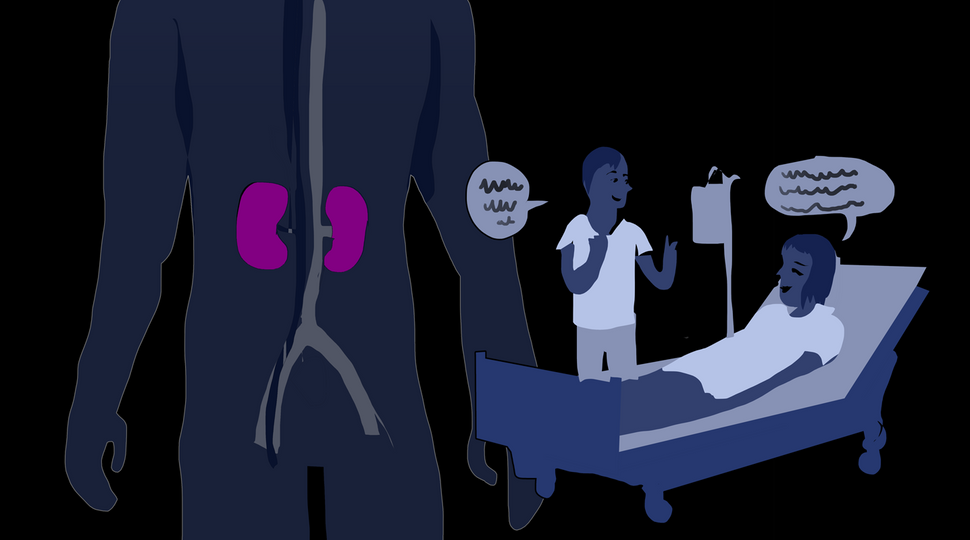 In the Hebrew Bible, the word “kidneys” is mentioned over a dozen times to metaphorically describe one’s emotional and moral choices. With a literal translation, Psalms 138:13 reads: “It was you who created my kidneys; You fashioned me in my mother’s womb. I praise You, for I am awesomely, wondrously made; your work is wonderful; I know it very well.” This verse now has such meaning for me. It is wondrous that God created me with two functioning kidneys. It is awesome that God fashioned me to only need one. God’s work is indeed wondrous that on May 24, I was able to donate a kidney to my father. And yes, I know this well!

This past September, when my dad’s kidney function dropped to 15%, I began the process of getting tested to see if I were a match. September to February was an emotionally challenging time. How could I voluntarily opt have major surgery when I had two young kids? How could I not help save my father’s life? So many moments I felt guilty for wanting to donate. So many moments I felt guilty for not wanting to.

In the Talmud (Berachot 61a) the rabbis describe the kidney’s function as one of “advising.” They explain that “a person has two kidneys, one of which counsels him to do good, and the other counsels him to do evil.” Elsewhere, the Talmud describes the kidneys as being the place where God gave us wisdom (Rosh HaShanah 26a). I now turned to my kidneys for help. For wisdom. For counsel. Could my kidneys help me figure out what the good, responsible decision was?

In 2006, an organization called Renewal started, a comprehensive resource for kidney donors and recipients functioning mostly in the ultra-Orthodox world. The first kidney donor to work with Renewal was Chaim Alter Berger, a young father of four. While he felt compelled to donate, he called his Rebbe, the Boyaner Rebbe Shlita of Jerusalem, for consultation. His Rebbe’s response was, “One who entertains such a shaila (question) is already beyond the level of doubt.” I too think that from the beginning I always knew I was going to do this, despite all the emotional and mental processing.

Deciding to donate my kidney was empowering. In a world that often feels perilous and random, I felt good about choosing to do something that could have such positive, tangible results. In a world where fear sometimes prevents us from acting, I took comfort knowing that I had overcome fears in order to try to do a great mitzvah, or good deed.

But the ultimate reason why I felt comfortable donating my kidney was because I knew that there were so many people who would help my husband take care of our kids during my absence, help care and feed my family during my recovery, and continuously offer help in multiple ways. I do not take this for granted.

For the 12 days following the procedure, my sister Ronit took care me. She slept with me in the hospital, escorted me to the bathroom, helped me shower, cooked me food, made photo books of my kids and tended to my every need. The level of compassion and care that I received from her went above and beyond what I would have been capable of giving. I felt humbled in her presence. At one point I timidly told her that I was uncertain I would have been able to care for her like she cared for me. Her response was that she did not think she’d be able to donate her kidney; that different people are made to show their chesed, or kindness, in different ways, and that that’s okay.

The Hebrew phrase mitzvah goreret mitzvah, “one good deed will bring another good deed” (Pirkei Avot 4:2) has taken on new meaning for me. I had always understood this to mean that the reward for doing a mitzvah is doing another mitzvah, or that when people see you do a mitzvah, they will be inspired to follow in your footsteps. But what I experienced throughout this ordeal was hundreds of people extending tremendous acts of kindness to me and my family, without which I would never have been able to donate my kidney. That in fact, one person’s ability to do a mitzvah is sometimes only possible if many people are willing to do mitzvot. Mitzvot do not happen in a vacuum. Only in communities where we are all committed to caring for and supporting one another can we overcome the fears that keep us from doing great things.

In Midrash, we read that Abraham was taught the Torah by his kidneys (Bereishit Rabbah 61:1). Indeed, my kidneys have taught me much Torah and have helped strengthen my ability to act in this world for good.

Yael Krieger is the Director of Educational Support at the Jewish Community High School of the Bay in San Francisco.