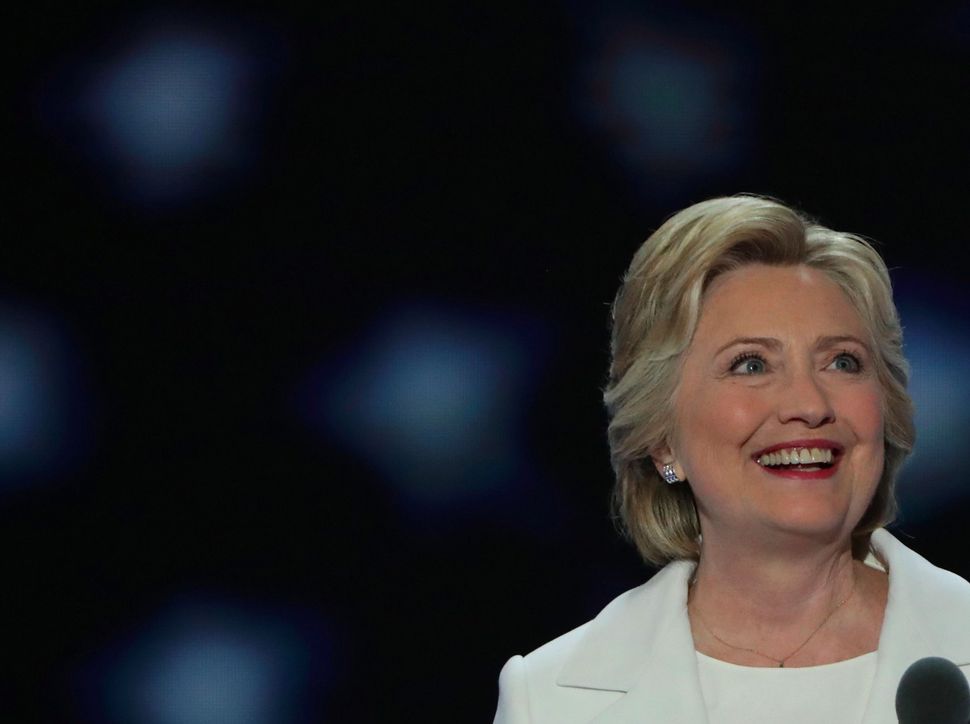 I remember just where I was on July 12, 1984 — about to return to the newsroom from maternity leave, anxious about leaving my first born, my precious little daughter, unable to imagine what it would feel like to satisfy the demands of both a job and a very young child because the workplace was so inhospitable and there were so few other working mothers to show the way.

My sister called, and the thrill in her voice burst through the phone line. A woman, Geraldine Ferraro, had been chosen as Walter Mondale’s vice presidential running mate, the first time ever in our nation’s history. And I remember what my sister said. She said that now even my daughter could be president!

Hillary Clinton’s speech accepting the Democratic nomination for president didn’t soar like President Obama’s, it didn’t astonish like Michelle Obama’s, and it surely didn’t frighten the way her rival Donald Trump’s scorching screed did the week before. It was remarkable because we heard her voice. For the first time in our history, we heard the voice of a woman enunciate what she would do with the most powerful job on the planet.

It was, for this Jewish feminist, a shehecheyanu moment, the moment that feels like a prayer, expressing our deepest gratitude to God for enabling us to reach this day. Sometimes I cannot believe that it took more than three decades, that my daughter is now a mother herself, but the spirit embodied in that blessing is meant to help us transcend time and be grateful for what has been achieved, no matter how long it took.

I recognize that there are many who wish it was a different woman breaking this proverbial ceiling, someone without the complicated baggage that Clinton has lugged around with her for so many years, grown heavier with partisan attacks as well as her own self-inflicted mistakes. But it may be that it took a woman living in the spotlight for decades to be able to speak with a voice mature enough to meet the challenge.

Any of us who have been “first” in a job as a woman have had to figure out, largely through painful trial and error, how to use our voice — are we too loud or too meek, too stern or too accommodating, too quiet or too pushy? Because a female voice had not been heard before from behind that desk or that podium, it is often judged severely, to a standard impossible to meet.

Clinton waited at least half an hour last night to mention the obvious: that she’s a woman seeking a job that has been held only by men for more than two centuries. Once she acknowledged it, she owned it, and you could hear her carve out a unique cadence that both confirmed expectations and turned the gender stereotype inside out.

The expectation is this: Women in leadership roles are expected to manage more collaboratively, to be more willing to share responsibility and credit, and to be less invested in hard-driving success. Like all generalities, it’s partially true, partially exaggerated, yet it seems to describe Clinton’s approach to governing.

Last night, she effectively built upon her belief that “it takes a village” to draw a sharp contrast with Trump, whose governing philosophy consists of repeating, as he did last week, “I alone can fix it.” If Trump campaigns in the first person singular, Clinton is all about the collective. Stronger together. Join us. America will never be a nation, she promised, “where one person had all the power.”

In another sense, Clinton’s speech — indeed, the whole convention — defied gender stereotypes. It was not very long ago when women were judged incapable of holding power because we were thought to be too emotional and unpredictable, without the proper steady temperament, and that life cycle events (marriage, motherhood) would prevent us from fully focusing on the enormous task at hand.

There’s a classic film from 1964, “Kisses for My President” in which a woman actually makes it to the Oval Office, only to have to resign after she becomes pregnant. Order is restored.

This presidential campaign has upended that order and reversed the stereotype, sending it packing down the Potomac. From the parade of military veterans to the fierce talk from a four-star general, the Democratic convention was orchestrated to project patriotic strength and resolve, and Clinton herself was repeatedly characterized as someone with the steely determination to command troops and manage crises.

There’s a political strategy here, of course, aimed at defining Trump as too thin-skinned and emotional for the job. One her best quips of the evening said just that — “A man you can bait with a tweet is not a man you can trust with nuclear weapons.”

But there is more that just strategy here. Clinton is presenting a new and nuanced model of leadership, in which a woman can be strong and steady and tough, and wear the pants, and still happily play the role of grandma. We have seen her over the years struggle with the constraints of being the political spouse, changing her name and her haircuts and her public identity. Now it seems she comfortably embraces who she is.

“Here is a woman,” Morgan Freeman intoned repeatedly in the stirring video introducing Clinton, again, to the public. Whatever happens in November, we can and should be grateful to reach this very moment.