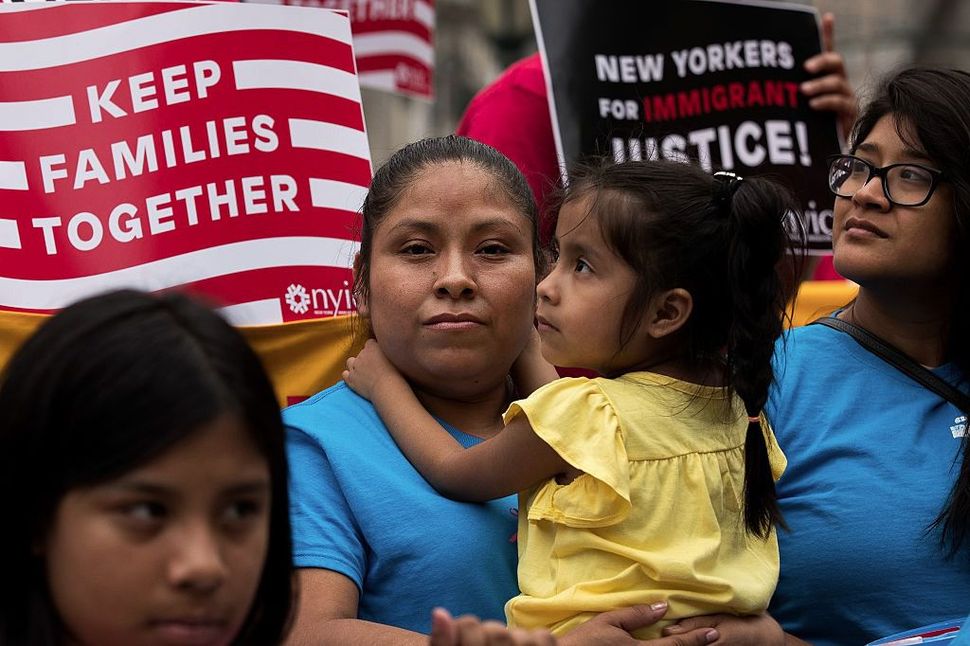 This election cycle, immigration has been a major focus issue. One candidate in particular has been using incendiary tropes and rhetoric in order to gain the votes of the fearful and the xenophobic. From allegations about the criminality of Mexican immigrants and the terrorist allegiances of Muslims to grand plans for delusional border walls, Donald Trump has been putting his ignorant, inflammatory views about immigrants and immigration front and center. Today at 2 PM, Trump will give a speech in Ohio, where, among other things, he will propose “political tests” for immigrants, in terms that will undoubtedly be problematic and will rely upon the same rhetorical insults that he has employed thus far.

Beyond the frightening levels of bigotry his language speaks to, Trump’s views about immigration also tap into a number of myths that are held even by non-hateful people, who are simply misinformed about the realities of immigrants and what immigration means to this country.

As Jews, this should not be unfamiliar territory. When waves of Jewish immigrants arrived in the United States, similar myths were spread and held about them, even among other Jews: that they would never assimilate, that they would be a drain on society, that they were criminals, that they would inspire anti-Semitism. These fears were based on myth, and were popularly held: in a January, 1939 Gallup poll, for instance, 61% of Americans voted against a proposal to bring 10,000 Jewish refugee children into the United States from Germany. The results of those myths were real, sending many Holocaust refugees back to their deaths from American shores.

Though immigration looks different now than it did during the first half of the 20th century, similar conceptual misunderstandings have similar negative effects on the lives of immigrants. It is the responsibility of anyone who believes that history should not repeat itself to debunk those myths, and to clarify the facts around immigrants and immigration. That’s why, in advance of yet another Trump immigration speech, we’re shooting down five of the most prevalent myths about immigrants and immigration circulating today.

Fact: Foreign-born people in America are incarcerated at a much lower rate than native-born Americans, and that’s according to the National Institute of Corrections. Further, if there were a high percentage of criminals among immigrants, it would follow that from 1990 to 2010, a period during which the number of undocumented immigrants more than tripled, there would be a surge in crime. The opposite is true: in fact, the violent crime rate declined almost 45% during that period.

According to Harvard sociologist Robert Sampson, the influx of foreigners has helped revive many depressed and criminally blighted communities. In cities like New York, Los Angeles, and Chicago, crime has subsided the fastest in neighborhoods with the highest concentration of immigrants.

If you take a second to really examine the facts of the matter, this makes perfect sense. People who have made the sacrifices and taken the risks to come to the United States are motivated to work, provide, and build a life for themselves and their families, and would be less likely to endanger their ability to do so with criminal acts.

Fact: A huge amount of extensive, reputable economic research—as well as basic common sense— shows that removing the approximately 8 million undocumented workers in the United States would not automatically create 8 million job openings for American citizens. [According to Daniel Griswold, director of the Cato Institute’s Center for Trade Policy Studies, this is because removing millions of workers from the economy would also remove millions of entrepreneurs and consumers and would therefore cost the economy jobs.

Additionally, immigrant labor often fills the growing gap between low skilled jobs and the amount of American-born workers who, because of better education and an aging population, are less willing to take them. The working landscape of America is changing, but it isn’t because immigrants are stealing jobs from citizens.

Fact: This is simply patently untrue. First of all, undocumented immigrants are not privy to a vast majority of benefits. They can receive emergency medical care and their children can attend schools, but they cannot access welfare, food stamps, Medicaid, or other aid programs: even legal immigrants cannot receive these benefits until they’ve been in the United States for more than five years.

Second of all, they do, in fact, pay taxes. In 2013, undocumented immigrants paid an estimated $13 billion in payroll taxes alone, much of which goes to benefits they cannot access. They pay sale tax each time they purchase taxed objects and pay property tax every time they buy or rent a house, just like any American citizen.

Myth: There’s a Legal, Accessible Way to Enter the Country for Everyone.

Fact: This concept is based in the idea that undocumented immigrants simply need to “get in line” for citizenship, but the fact is, for the vast majority of immigrants, there is no “line.” The qualifications for a green card (employment in very specific fields, refugee status from very specific countries, family relationships with American citizens, and the “diversity lottery”) do not create a “line” for the vast majority of people who want to emigrate to the United States. Undocumented immigrants already in the country have virtually no way of legalizing their status. According to recent opinion surveys, 98% of undocumented immigrants interviewed said they would prefer to be living and working legally in the United States. There is simply no way for them to make that happen.

Myth: We Are Being Over-Run With Immigrants Like Never Before

Fact: Though there are numerically more immigrants living in the US than ever before, that fact alone is deceptive. Between 1870 and 1920, when many of the ancestors of current US citizens arrived in the United States, immigrants made up nearly 15% of the population. Today, the highest estimates have immigrants making up 13% of the population. The idea that because there are more physical immigrant bodies in the United States today than ever before misses the point, in that it ignores the fact that there are also more physical bodies in general—immigrant and citizen alike—than ever before. It should also be noted that even during periods like the one between 1870 and 1920, when immigrants made up a higher percentage of the US population, those immigrants successfully became part of American society and helped to build the diverse country we live in—just as today’s immigrants will.