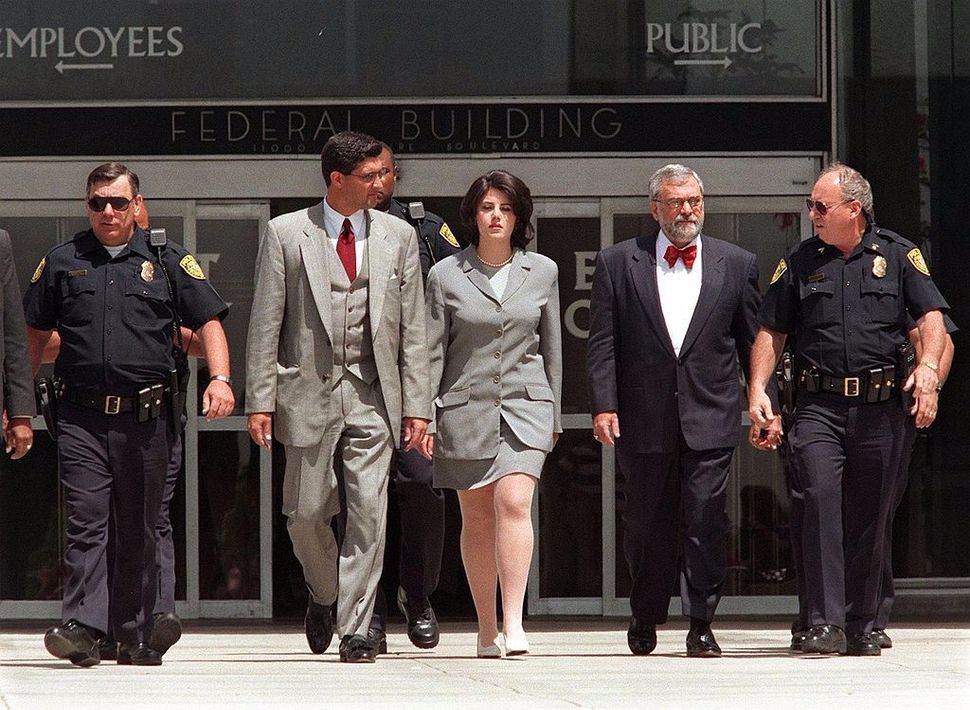 While we as a nation prepare for the presidential debates between Hillary Clinton and Donald Trump — the first one is slated to take place at Hofstra University on September 26 — much is being written about each candidate’s debate prep. Trump is battening down the hatches by taking advice from former Fox News chairman and many-time sexual harassment accusee Roger Ailes. Clinton, for her part, is searching for a sparring partner to ready herself for the fight ahead.

There are many things that Clinton could legitimately be taken to task for — her hawkishness, allegations of corruption and ties to big banks and Wall Street, to name a few. But one particularly problematic subject of focus when it comes to her debate prep — as pointed out by a recent Politico article — is Monica Lewinsky.

Trump will almost certainly bring up Lewinsky, with whom Clinton’s husband, then-president Bill Clinton, had an affair between 1995 and 1996.

First off, this inevitability speaks to a vicious undercurrent of sexism coloring this election and the American political landscape at large. That Clinton has to prepare for a political debate for the office of President of the United States by considering not if, but how, an affair her husband had over 20 years ago will be thrown at her is ludicrous. Clinton is expected not to bring up any of the things in Trump’s life that would be considered “salacious” by normative sexual mores — things he himself did, rather than things his spouse did — but is at the same time expected to accept that he will bring up her husband’s affair. The fact that something she relates to exclusively as a painful personal memory is fair game for a presidential debate is indicative of a deep sickness at the heart of what we expect from women in public office.

But looking at this specific election, and Trump in particular, his rhetorical use of Lewinsky may be even more problematic than it appears.

For people who had not yet come of age during the scandal and hearings (I was nine years old in 1998, the year the affair became public knowledge), the way Lewinsky was treated by the public, the press, appointed officials and the people conducting the trials is absolutely shocking. The way her sexuality was criminalized, the way her life was picked apart and her character demonized, the way her body was physically displayed and put on trial — it all seems mindblowingly horrifying. Even major news media outlets were unabashed in their language: In The Wall Street Journal, she was called “a little tart”; New York Magazine focused on summers she spent at fat camp, where she was “focused on the boys”; Fox News held a poll in which 54% of respondents called her a “young tramp looking for thrills.” Journalist Jessica Bennet points out that even Maureen Dowd, who won a Pulitzer Prize for her coverage of Lewinsky, called her “ditzy,” “predatory,” and “the girl who was too tubby to be in the high school ‘in-crowd.’”

This is especially jarring considering how Bill Clinton and Lewinsky stood in the eyes of the public when the dust cleared. Clinton, the adulterer, who at the time was literally the most powerful man in the world, was largely forgiven in the eyes of the public. He was practically given a pat on the back and a wink for all his incorrigible charm. Lewinsky, who at the time of the affair was 20 years old and an intern in Clinton’s office, was forever branded a moral failure, a seductress, a fallen woman: fair game for insults from anyone and everyone.

Clearly, women today face dissection, degradation and ire aplenty, but this unified front of sexualized shame and disrespect is enough to be shocking even 20 years later.

There is, pointedly, another dimension of the way Lewinsky was painted in the public eye that is particularly pertinent to Trump, and, specifically, to some of his supporters. It has to do with her Jewishness, with her existence as a Jewish woman.

At the time, it was said that because her being Jewish was never technically mentioned during the proceedings, and because it seemed not to be the main focus of the vitriol against her, the scandal actually was something of a positive indicator that certain harmful anti-Semitic sentiments were finally defeated. This allowed many Jewish communities to disown and “other” Lewinsky, even debating whether she should even be offered support as “one of the tribe” at all.

Looking closely at how she was depicted, however, you see that despite her Jewishness not being mentioned in a literal way, she was made to be the embodiment of one of the oldest anti-Semitic canards: that of the Jewish woman as temptress.

She was portrayed, as theorist Magdalena J. Zabrorowska pointed out, as a “compilation of excesses.” She talked too much and demanded too much of men and the male world with her ambition. Her physical body was lambasted for its perceived excess: the sin of fleshiness made into countless fat jokes that both sexualized and shamed her body. And, the worst sin of all, she was unabashedly sexual.

All of these criticisms describe challenges to the heterosexist norms of the white, Christian patriarchy. The Lewinsky affair was consistently talked about as a corruption of the morality of America as a nation — the corruption of the Christian male president and his institutionally supported marriage by Lewinsky and her brazen, fleshy, over-sexed Jewish body.

Once Lewinsky was painted into this character, what happened to her could be seen as a sort of a public moral torture and execution, atoning for the sins against Christian norms by tearing apart and attacking a Jewish woman. In an interview with Jon Ronson for his book “You’ve Been Publicly Shamed,” Lewinsky herself described her experience in similar terms. “I feel like every layer of my skin and my identity were ripped off me in ‘98 and ‘99,” she told him. “It’s a skinning of sorts. You feel incredibly raw and frightened. But I also feel like the shame sticks to you like tar.”

And now, in our current election atmosphere, a Lewinsky reference becomes doubly troubling. It would certainly bolster the general sexism that Trump has been using against Clinton, in which publicly humiliating her for the perceived sexual “failing” of not being able to “keep her man faithful” (as if that’s how infidelity worked in any way) is acceptable. It also signals a desire on Trump’s part to return to the atmosphere of nearly two decades ago, in which it was far more acceptable to completely crucify a woman the way Lewinsky was crucified.

Further, though, consider the large, vocal subgroup of Trump constituents who are blatantly anti-Semitic, and consider his refusal to denounce them despite statements on their part that they read his refusal to comment as endorsement. In this context, mentioning Lewinsky to denigrate Clinton can double as an act of blatant sexism and a dog whistle to his anti-Semitic followers, emboldening them to keep using the anti-Semitic archetype Lewinsky was portrayed as embodying.