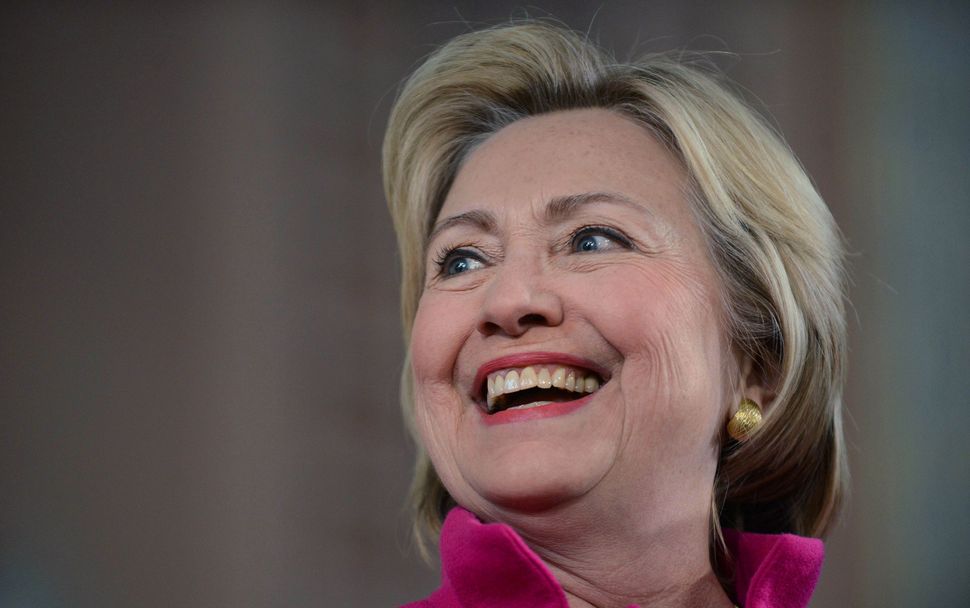 Full disclosure: I’m a Democrat. I volunteered for Barack Obama in 2008 and 2012 and voted for Hillary Clinton in the 2016 New York primary. I’ve donated money to Hillary for America. But it wasn’t until last week that I became, in my heart, a Hillary Clinton supporter.

Heading into a Cleveland, OH, fundraiser last Wednesday, I had this nagging sense that, while I backed her policies, Clinton was a little too wonky and lacked the authenticity and rapport with voters required to be a great president.

Meeting Secretary Clinton – hearing her speak off-the-cuff, without notes, at an intimate living room roundtable – I saw first-hand that policy is simply a tool for Clinton. Some people have a passion for gardening or creating art or scrapbooking. Clinton’s abiding passion in life – the animating spark of her wonkiness, if you will – is bettering people’s lives.

By the time I left, I was convinced not only of her genuineness; I felt that, if most Americans could spend just a few minutes with Clinton, she’d easily win both minds and hearts.

In person, Clinton was funny, approachable, and above all, easy to talk to. She listened intently to people’s questions on topics ranging from college debt to immigration to urban development and the tax code, moving easily from topic to topic. The questions were not pre-vetted, and she came prepared with no notes or briefing books. What she had was the deep, profound knowledge that comes from experience and something else, too: a desire to truly hear what was on our minds. Hear – not because we’re Ohio voters – but because hearing is the thing that enables her to help.

Toward the end of the roundtable, I raised my hand and asked Clinton about an issue that’s important to me: the international boycott, divestment and sanctions campaign aimed at isolating the Jewish state by severing academic and commercial ties to Israel.

Clinton began by noting proudly that she fought successfully to include language in the Democratic Party platform for the first time explicitly condemning BDS. But she became most exercised and animated when she spoke about the movement’s anti-Semitic roots.

That is to say, she opposed BDS at the policy level; at the human level, where our deepest empathies lie, she was downright offended by it.

During the roundtable, Clinton also spoke about an Israeli pre-K program she brought to the United States as First Lady of Arkansas in the mid 80’s called the Home Instruction Program for Preschool Youngsters, or HIPPY.

Developed in Israel in 1969 to help children of North African immigrants – particularly Ethiopia – succeed in Israeli schools, HIPPY works by training educators to work with parents in the home; once they’ve been trained, parents instruct their kids in daily sessions covering letters, shapes, songs, and rhyme using workbooks HIPPY provides.

“The secret to the program…was to teach the mother to teach her child,” Clinton explained at a Florissant, MO community meeting last June. “We need to do more of that, and I call on all of us to find ways to reach into those families.”

When I met Clinton at the Cleveland event, I told her that my mom, 71, slowed and diminished by a severe stroke 8 years ago, wanted me to ask her about her commitment to universal pre-K. My mother, who came of age with the feminism of the 1960s and took us to Washington, D.C., to march for abortion rights, was my first teacher, too. If there’s one issue that’s critically important to her today, it’s giving young children a leg up.

“You’ll let me know what she says?” my mom said.

Clinton listened intently as I spoke, making eye contact the entire time. When I finished, she said, simply: “Tell your mom, it’s a priority of mine, too.”

And I believe her. It’s been true, after all, her entire career.

“When I was First Lady of Arkansas,” Clinton said at the Missouri meeting, “I struggled with this issue. We had a lot of kids – poor kids – in the Delta and South Arkansas, and up in the mountains, and we were not going to be able to afford at that point all those years ago, a universal pre-K program…so I looked for programs that people could run themselves.”

She found HIPPY, and she sold it to reluctant conservative lawmakers in Arkansas in part by pointing out its potential as a job creator. Since that time, HIPPY has expanded to 140 communities in 21 states and the District of Columbia, preparing 15,000 children for kindergarten, immeasurably improving people’s lives.

I only had a moment with Hillary before she had to move on, so I did not get to deliver the other part of my mother’s message.

I hope she does. But in the meantime, one thing’s for sure: She got me.