It’s Hard for Leftists in Israel? That’s Exactly Why You Should Stay. 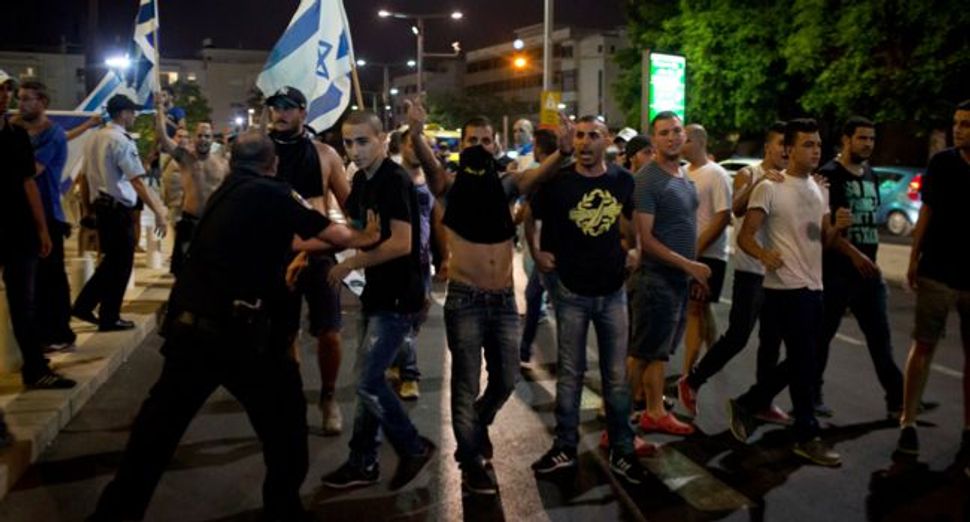 ‘Burn the Leftists!’: A mob of extreme-right activists attack a peaceful demonstration in Tel Aviv on June 12. Image by Oren Ziv/Activestills

The most common question I get asked about my decision to immigrate to Israel five years ago is “Why? Why would you move here?” Sometimes it’s asked by earnest American Jews, and sometimes it comes with a tinge of that famous Israeli cynicism. Either way, it raises the specter of another question, one that is increasingly bubbling to the surface among Israeli leftists as the country slides to the right: How much longer will you stay?

This was one of the many questions on my mind as I recently moved through the customs line at Ben-Gurion Airport near Tel Aviv, after a brief visit with family and friends in Toronto. There, under the fluorescent lights and security cameras, a familiar and deeply ambivalent feeling came rushing back. It’s a feeling that triggers all the usual questions I imagine people like me, Israelis with a critical relationship to their country, grapple with as they wait for their luggage.

I wonder about the work I do here and whether a just peace is just a lost cause, and whether I should instead focus on climate change, because that’s probably the most pressing issue humans face. And then I wonder if I should figure out how to get rich so I can donate my money to causes I care about, or maybe if I should just get rich, period. And I wonder if my family is proud of my work here or if they would simply prefer that I move to Toronto. All these questions about life’s work and commitment to community, family and friends, and about loss and violence and movement building, swirl around in my brain as I walk out into the wet mouth that is August in Tel Aviv.

And despite feeling heavy from the airplane food and exhausted from the endless reel of movies I decided to watch on a tiny screen, my groggy and sleepless mind light up in the Tel Aviv air. Those questions drive me forward, because I moved here for what I still believe are worthwhile reasons.

I moved here because, growing up in the leftist Hashomer Hatzair movement, I developed a deep and critical relationship with this place and the peoples here, and I felt strong purpose in moving here. I moved here to develop a deeper connection to my culture and my people by learning Hebrew and I moved here to take part in the movement to end the occupation and build space for real self-determination for the peoples that call this place home. I’ve done this in recent years by working to create more conduits into the anti-occupation movement by co-founding activist projects like All That’s Left: Anti-Occupation Collective, and to increase the amount of space here for critical educational communities like This is Not an Ulpan, and through movement building programs like Solidarity of Nations – Achvat Amim.

I admit it: I’m tired. Like so many other leftists, I’ve often asked myself where my breaking point is. And the truth is that we’re losing right now. We hold very little sway in this society and it would be hard to argue that we have moved closer in recent years to ending the occupation and establishing long-lasting peace here. Being chased by Kahanist thugs through the streets of Tel Aviv after peace rallies; facing intimidation while helping Palestinian farmers in occupied territory, and facing the rightward slide of this society, which barely acknowledges its military rule over millions, let alone the Nakba — all take a toll on those struggling against the stream. Even wearing a T-shirt with Arabic writing on it in the center of Tel Aviv can elicit sideways glances. So it’s no wonder people of conscience think about leaving.

But building a new reality here doesn’t require a secret formula. It requires a movement and movements grow when committed people put time and energy into them. Movement building requires a lot. Winning demands even more. And, even in the face of a worsening reality, everyone who can be here should be here, struggling for a just future.

I don’t think that only leftist Israelis should stay. I think that everyone who stands for human rights and cares about this place and these peoples and can be here, should be here. Jews, Palestinians, Israelis, everyone. The attitude of “We shall not be moved” is a signature feature of all successful movements (both the just ones and the unjust ones). Persistently growing the number of people here who are committed to a better future is essential to winning. Being part of a movement can’t just be about holding a worldview. It has to be about working to actualize a vision for a better world even if it seems to be a distant reality.

It’s important to acknowledge that there are a variety of reasons why people might choose to leave or may not be able to stay — whether it’s because they can’t make ends meet in Israel’s economy or don’t want their kids to grow up in an ultranationalist school system where racism can be the norm. No one can be faulted for seeking out a place with a seemingly brighter future, a place that doesn’t require constant struggle. It’s a decision that each person has to make independently and I deeply respect the decisions people make for their own lives. I’m also keenly aware that there are a lot of people who don’t have a choice about where to live and can’t go elsewhere, including those living under occupation, those living in poverty, or both.

There are a number of movement roles folks take on in other places around the world. Whether you are working as an educator in your community, or fundraising for progressive organizations on the ground, or working to sway those in the halls of power, you can make a difference for Israel from outside Israel. Groups like The Center for Jewish Nonviolence and If Not Now are creating new spaces for anti-occupation activists based in the diaspora.

I don’t know where I’ll be in a few years’ time. My partner and I have thought about and discussed what it would mean to move back to Toronto. For the time being we are committed to what we’re doing here now. But I don’t know what the future holds. I don’t know how long relationships can last across oceans, and I don’t know if I should be there caring for my family. Despite the many questions I am facing in my own life, I do know that we need more, not fewer, people here to face the hard reality at hand, and to strengthen the voice calling for justice, equality and peace for Israelis and Palestinians.

A. Daniel Roth is an educator and journalist currently based in South Tel Aviv. Find his writing and photography at allthesedays.org and follow him on Twitter @adanielroth

It’s Hard for Leftists in Israel? That’s Exactly Why You Should Stay.