Israel’s Shabbat Wars Are Heating Up — No Thanks to the Politicians! 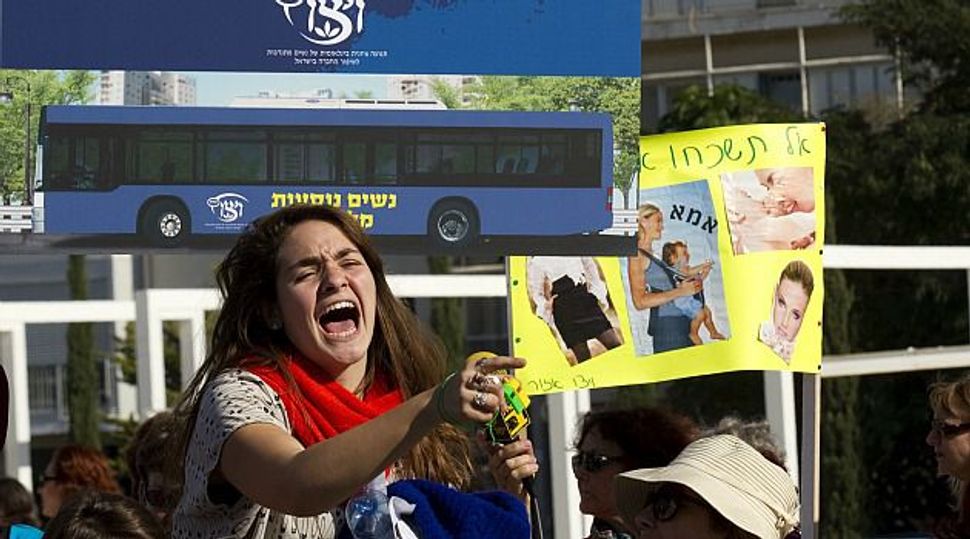 No More Back of Bus: Israeli women protest discrimination on transport and other spheres of public life. Image by getty images

Cultural Zionist philosopher Ahad Ha’am famously wrote, “More than the Jews have kept the Shabbat, the Shabbat has kept the Jews.”

But Ahad Ha’am didn’t live in Israel in the 21st century, where it is more relevant to paraphrase him by writing, “More than the politicians have kept Shabbat, Shabbat has kept the politicians.”

In Israel, Shabbat is not kept according to religious law or secular interpretations, but rather according to the so-called “status quo,” a political understanding based on a 1947 letter from then-Chairman of the Jewish Agency (and later Prime Minister) David Ben Gurion to the ultra-Orthodox Agudat Israel party, in which he promised that the Shabbat would be Israel’s official day of rest.

Over the years, interpretations of this “status quo” have largely been left to municipalities and the Supreme Court. The ultra-Orthodox definition of Shabbat observance has never been put into law, which permits all sorts of necessary, essential or life-saving services on Shabbat. Officially, there is also a ban on public transportation, but public busses do run in some cities and enterprising secularists have come up with numerous alternative transportation services.

The borders of this status quo are constantly challenged, according to a tacitly-agreed upon routine: the secular majority finds creative definitions for “necessary, essential and life-saving situations” that justify violation of Shabbat — including not only factories, hospitals and airports, but also movie theaters, museums, coffee shops, bars, beaches, and commercial centers and stores. The ultra-Orthodox minority protests but gives in. And no one is supposed to gloat.

And so, work on the high-speed rail connection between Tel Aviv and Jerusalem, which was originally slated for completion by late 2018, has been progressing, including over the Shabbat, because, in the words of Transportation Minister Yisrael Katz, the work is both “needed and essential.”

But then Katz gloated about the progress the project was making. The ultra-Orthodox began to pressure Prime Minister Benjamin Netanyahu to put a stop to the work over Shabbat. The National Train Company and Katz countered that since Sunday is a regular workday in Israel, rescheduling the work to weeknights would mean cancelling all the trains on Saturday night and Sunday morning, which are peak travel times, and mayhem would ensure.

Netanyahu hemmed and hawed. Then, just six minutes before Shabbat was about to begin on the last Friday in August, he issued an order to stop all work until Sunday morning. Defense Minister Avigdor Lieberman decided to hire, at the taxpayers’ expense, hundreds of buses to bring the soldiers to their bases on Sunday morning.

And so at the construction site, Shabbat was observed but the workers had to find their way home without public transportation. Countless people were forced to violate Shabbat to make the arrangements for the busses. On Sunday morning, busses for the soldiers were caught in monumental traffic jams, just like everyone else.

The issue has been referred to a committee, as it has since been made clear that Netanyahu doesn’t actually have the authority to issue stop-work orders. Last Shabbat, the work continued as usual.

The question of how Shabbat should be observed in public space in Israel’s multi-cultural society is complex. How do we make accommodations so each Jew can be Jewish according to his or her personal belief — or lack of belief? And how do we accommodate the non-Jewish minorities who live here, for whom Shabbat is little more than an imposition?

To me, Shabbat also brings both spiritual and social values. Shabbat can provide us with powerful lessons about our individual and collective place in the universe. It can help us reject consumerism and hyper-consumption. By providing a day of rest for all, including the weakest sectors of society, Shabbat represents an opportunity for social justice.

But sadly, for our politicians, Shabbat merely provides another political opportunity. For the ultra-Orthodox, this newest crisis was a chance to show Netanyahu some muscle. For opposition leaders Yair Lapid (Yesh Atid) and Yitzhak Herzog (Zionist Camp), who emphasized the difficulties for the soldiers, it was an opportunity to wave the flag and show their loyalty to the troops. For the left-wing parties, Shabbat has long been an opportunity to make populist, headline-grabbing petitions to the High Court that, for example, ministers shouldn’t be allowed to drive their cars as long as there’s no public transportation for everyone else.

And for Netanyahu, this Shabbat was little more than an opportunity to show his upstart Transportation Minister, who’s been a thorn in his side for a long time, just who is boss.

We speak of the peace of Shabbat, but Shabbat wars are heating up. Interior Minister Arye Deri has now threatened to close businesses that operate on Shabbat in Tel Aviv. In response, the religious freedom movement, “Be Free Israel,” has posted on Facebook, “For every ‘desecration of the Shabbat’ that you try to stop, you’ll get an even bigger desecration, and intentionally.”

The challenge of finding a peaceful and enriching way to balance conflicting values isn’t unique to Israel, and nor are conflicts over the meaning of a “day of rest.” Even in the United States, where religion and state are officially separate, some states have blue laws designed to enforce religious standards on Sundays.

In Israel, ad hoc civil society groups and cultural institutions have proposed various solutions, such as closing down commerce while allowing for cultural activities, entertainment and the public transportation to get to them. These groups need our financial and public support.

The question of Shabbat is too important to leave to the politicians, who seem to care for nothing except their own gain. If we don’t come up with solutions for our fractured society, even Shabbat won’t be able to keep us together.

Israel’s Shabbat Wars Are Heating Up — No Thanks to the Politicians!