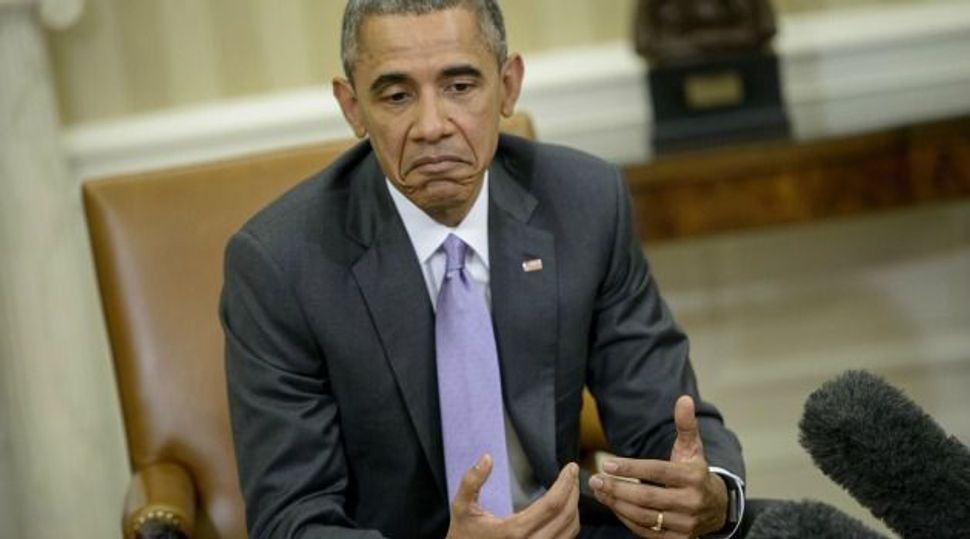 You can consider the unprecedented 10-year, $38 billion military aid package that the United States just signed with Israel by the numbers.

Or you can consider it as a Rorschach test for the waning days of the tempestuous relationship between President Obama and Israeli Prime Minister Benjamin Netanyahu, who will be meeting face-to-face today, perhaps for the last time, in the shadow of the United Nations.

As our Nathan Guttman explained after the agreement was signed in the State Department’s Treaty Room last Wednesday, both leaders had reason to say that the protracted negotiating process led to each side legitimately claiming victory.

Netanyahu demonstrated that despite his aggressive opposition to the Iran nuclear deal, he could still bring home the largest and most generous military aid package that the United States has given any nation, at any time.

For his part, Obama demonstrated that despite being labeled an anti-Israel president who was forced again and again to prove he wasn’t an anti-Semite, he authorized, yes, the largest and most generous military aid package that the U.S. has given any nation, at any time.

But, of course, it doesn’t end there. (With these two, it never does.) To their supporters and their critics, these men are more than two important leaders — they are repositories for what people believe should be the proper way Israel and the U.S. should treat each other. They are vessels into which we pour our expectations, frustrations and aspirations for what to many Jews is the most important alliance America has. In other words, the aforementioned Rorschach test.

If you want to believe that Netanyahu was out-manuevered, there’s plenty of evidence — and company.

Before the ink was dry, the prime minister’s many critics in Israel decried the bargain that he agreed to, arguing that if he hadn’t repeatedly picked a fight with the leader of the free world, he could have secured a bigger pledge of assistance. Ironically, that criticism came mostly from the left in Israel; the right-wing defense minister, Avigdor Lieberman, had nothing to say about the prospect of billions pouring into his department over the next decade. (Not even thank you.)

For decades, Israel’s special relationship with the U.S. extended to a special exemption from U.S. aid policy. While most nations receiving such funds must buy their weaponry from American companies, Israel was allowed to spend a portion of the money at home, to boost its own military industrial complex. With Israel now exporting weaponry, the boost isn’t necessary, and the exemption was eliminated.

Also omitted from this deal is the end-run that Netanyahu was able to perform around the White House, straight to Congress, to secure more aid. That avenue is now blocked, with Netanyahu agreeing not to go to Congress and even to return any extra funding that the good folks on Capitol Hill might want to send in his direction.

But there is another way to view these two men and the deal they just struck. Despite the dramatic ebbs and flows of their relationship, they both were unwilling to upset the status quo.

Years of on-again, off-again negotiations, threats, promises, stalemates, violence and terror have brought Israel and the Palestinians no closer to ending their conflict and a near half-century of occupation. In fact, the sides seem more entrenched. By some estimates, the number of Jewish settlers living on land that Palestinians expect to be part of a future state has doubled since Obama took office. Meantime, the Palestinian Authority is so deeply unpopular that it won’t even hold local elections for fear of defeat. (The last national election was supposed to take place in 2009. Still hasn’t happened.)

With politics at a stalemate, an uneasy status quo remains.

The military aid package rewards Israel for remaining a bastion of stability and security in a region turned upside down by civil war and unrest, and recognizes that the Jewish state needs to maintain its “qualitative edge.” No quarrel there.

At the time of the poll, rumors abounded that Israel was trying for more than $40 billion. Even if true, it didn’t happen. But the eventual outcome was only $2 billion less, over ten years, and it’s safe to assume that the public, if polled today, might react similarly.

As Obama and Netanyahu meet this afternoon, they will undoubtedly hail the “unshakeable bond” uniting their two countries, and they should. But forgive us if we fear that the bond also enforces a status quo that may over time become unacceptable to more and more Americans, and detrimental to Israel’s democratic future.