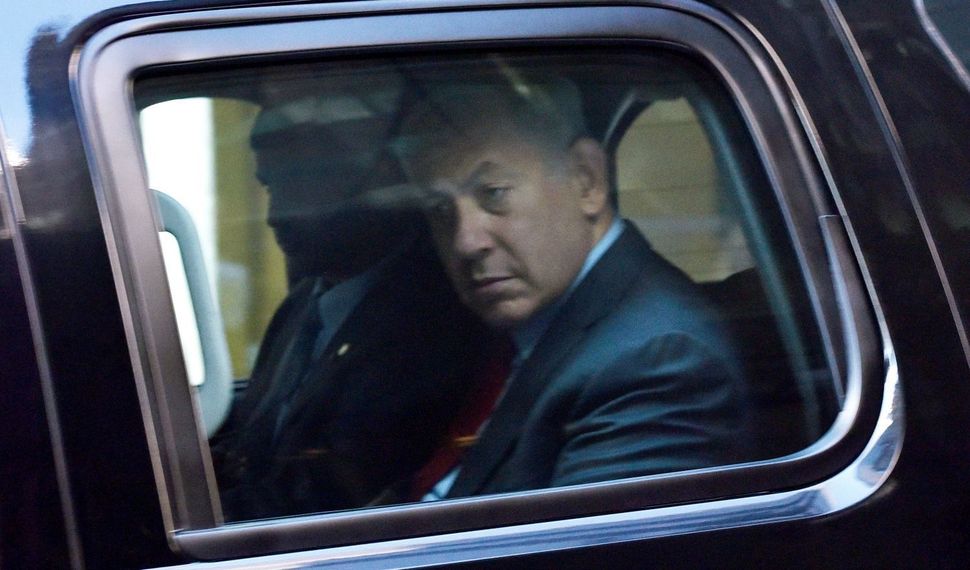 The day before the American presidential debate, Israel’s Prime Minister Benjamin Netanyahu was in New York, working his famous charm on the two major candidates.

The prime minister regards handling Israel’s international relations as one of his strong suits. And indeed, after meeting Donald Trump Sunday morning and Hillary Clinton that afternoon, he was able to assure Israeli citizens, as , that “no matter the election results, we will have a friend in the White House.”

The last time he tried this was before America’s 2012 election. That was when he publicly embraced Republican candidate Mitt Romney and infuriated the sitting president, Barack Obama, a Democrat. Romney proceeded to lose the election, of course, and the prime minister was left with a sworn enemy in the White House.

That’s why Netanyahu insisted this time, after agreeing to a get-acquainted meeting with Trump, that Clinton be added to his schedule. Not that he needed to get acquainted with Clinton. They’ve known each other since his first term as prime minister, when she was first lady. More recently, she spent countless hours as secretary of state jawboning him, trying to advance a vision of peace that he didn’t share. They know each other all too well.

No, the main purpose of Netanyahu’s Sunday meet-the-candidates program was to give Trump an opportunity to look presidential. In a week when 100-plus world leaders were gathered in New York for the United Nations General Assembly, dozens wanted to touch base with the former secretary of state. Only two took the time to meet with Trump: Netanyahu and Egypt’s President Abdel Fattah a-Sisi.

Nearly as important to Trump, meeting with the Israeli leader should help score points with pro-Israel conservatives in the Jewish and Evangelical communities. Trump’s poll numbers are strong in both of those voting blocs, but the support is uneasy. Both groups are giving him strong backing primarily because he’s not a Democrat and won’t appoint liberals to the Supreme Court. But he’s not exactly a Republican either, at least in the normal sense of the word. Among his widest deviations from GOP doctrine are on foreign policy, abortion and gay rights. Those happen to be the top priorities of Jewish and Evangelical conservatives. Accordingly, a photo op with Prime Minister Netanyahu is worth its weight in super PAC donations.

The actual content of the two meetings was decidedly secondary. Both candidates made promises to the prime minister that they may or may not keep once they’re in the White House. Clinton said she’ll keep pushing for a two-state solution to the Israeli-Palestinian conflict, but she said an agreement should result from direct, bilateral negotiations and she consequently promised not to impose a solution on Israel nor to let the U.N. Security Council do so. That could be an intentional ploy by the hawkish Democratic nominee to box in the current president. Obama is widely rumored to be contemplating just such a U.N. resolution for his final months in office, after the November election. Clinton’s opposition could make it harder for Obama to do that, assuming she wins the election. Longer range, though, it could be nothing more than boiler-plate repetition of longstanding U.S. policy, trotted out during election season and promptly shelved after inauguration.

Trump’s meeting with Netanyahu generated some weird headlines, as Trump meetings nearly always do. The oddest involved Trump’s statement to the prime minister that American aid to Israel is “an excellent investment for America.” That prompted snarky headlines from a number of news outlets (here and here) complaining that Trump was reducing America’s support of Israel from a moral obligation to a straight business transaction. In fact, it was Trump’s way of walking back his statement from last March that allies receiving U.S. military aid, including Israel, would have to repay it. His latest comment turned Israel’s aid package from a handout into a smart business deal, Trump’s oft-declared highest value.

The biggest headlines from the Trump-Netanyahu sitdown was the candidate’s promise that he’ll recognize undivided Jerusalem as Israel’s capital and move the U.S. embassy there from Tel Aviv. That’s a promise that every presidential candidate makes during the campaign and every president ignores after inauguration. The usual explanation is that moving the embassy would engender fierce anger throughout the Arab world. The actual reason is that the United States has never recognized Israel’s annexation of Jerusalem’s eastern sector, captured during the Six-Day War, and the fate of the eastern zone is considered by every country except Israel to be subject to negotiation.

For that matter, the United States has never recognized Israel’s sovereignty over West Jerusalem either. The entire city, east and west, was set aside as an international enclave in the 1947 U.N. partition plan that created Israel. Since Israel and its neighbors have never been able to sit down and finalize the borders between them, Jerusalem remains technically an international zone — in the eyes of everyone except Israel — until the borders are settled in a final status agreement.

True, most countries have recognized Israel’s sovereignty over the areas it wasn’t allocated in the 1947 plan but ended up with after the 1948 independence war. Jerusalem, however, remains a hot potato. Indeed, the State Department has consistently refused to designate “Israel” as the birthplace in the passports of American citizens born in Jerusalem. Congress has tried repeatedly to order U.S. recognition of Israeli sovereignty in Jerusalem, both for embassy location and passport designation, but the every president has refused. The Supreme Court finally settled the issue in 2015 in a passport case, ruling that the president has the exclusive constitutional power to recognize foreign governments and their sovereign borders.