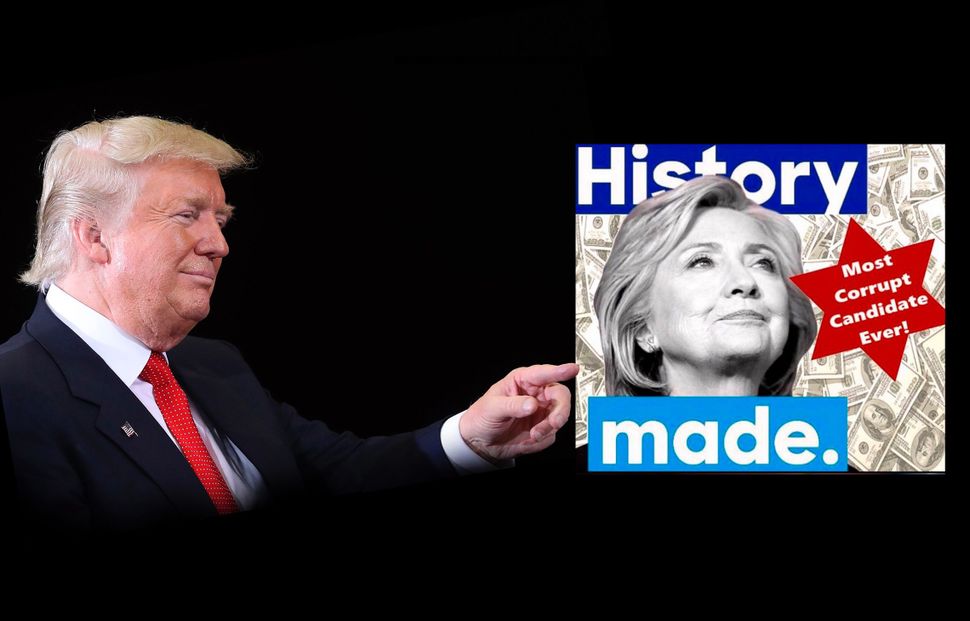 Over the summer, a writer for the “alt-right” website Breitbart News called Hillary Clinton a communist. What’s striking about the accusation is certainly not its source, nor its target, and definitely not its content. What’s striking is that the article appeared side by side with a web advertisement for Stephen Bannon’s film “Clinton Cash.”

The juxtaposition pairs two contradictory views of Clinton: that she hates money, and that she loves it. The article claims she has a communist wish to destroy the legal basis of private capital, while mere screen inches away the ad insinuates that she cozies up to moneyed interests and treats government office like her personal yard sale. The pairing makes little sense, and yet somehow it’s hauntingly familiar.

Bannon, who was the executive chairman of Breitbart News and is now Donald Trump’s campaign chief, would surely blame the inconsistency on Clinton herself. If lies are her métier, “Crooked Hillary” could easily be a communist one moment and a capitalist when convenient. To illustrate her alleged moral bankruptcy, her enemies often point to her marriage. Bill Clinton’s “predatory sexual acts,” another Breitbart writer suggests, have found a “willing co-conspirator” in his wife.

Elaborately secretive and manipulative; corrupt and greedy; has communist sympathies; a native of the high-finance cabal; venal traitor and agent of dark and foreign moneyed interests; sexual deviant. We’ve seen this particular portrait before. And there’s a familiar ring to “Crooked Hillary,” too, isn’t there?

There’s really only one other name besides “Hillary” to which the epithet “crooked” has been affixed so regularly, and it’s the name not of an individual, but of a people. That name, of course, is “Jew.”

The stereotype of the “Crooked Jew” has trailed the Jewish people from the Christian Gospels to Chaucer’s “Canterbury Tales” to Shakespeare’s Shylock to Fagin in “Oliver Twist,” and beyond. In the Nazi editorials of Der Stürmer, the Crooked Jew is a corrupt banker and/or communist preying on innocent working people in order to enrich himself and advance his own alien agenda. Since the prevalent caricature of Clinton resembles so closely this anti-Semitic caricature of the Jews, it’s perhaps no surprise that Trump has substituted “Hillary” for “Jew” in the old epithet.

Trump didn’t create that caricature, neither of the Jews nor of Clinton, but he uses such ethnic stereotypes to rile susceptible voters with fear and hate. When Trump tweets an image of Clinton next to cash and a Jewish star, and tags her the “Most Corrupt Candidate Ever,” he’s deploying anti-Semitic stereotypes, just as he is when he says “Crooked Hillary” — wink, wink, Crooked Jew. It’s another way of calling her un-Christian and un-American, just as he’s called Barack Obama a foreign-born Muslim.

When Trump says “Crooked Hillary,” he’s invoking the paranoia that there’s a wolf in the fold, an un-Christian stranger, a powerful foreign element in the people’s midst. He’s invoking the ancient fear of Judas, the Crooked Jew. Conservatives have in fact been hurling the Judas trope at liberals in general for a long time. In the 1990s, for example, Newt Gingrich circulated memos urging Republican congressional candidates to call Democrats “traitors” at every opportunity. As avatars of Democratic power, the Clintons are just the most famous bogeymen.

But the suspicion directed at the Clintons has also been self-perpetuating and self-amplifying. Suspicions breed questions, questions yield a police sketch, the sketch breeds more suspicion. The gruelingly petty history of Clinton scandals begins and ends with trivial investigations that uncover nothing of substance but leave lingering doubts: Why do people keep investigating them if there’s no misconduct?

Sorry, but Whitewater is no Watergate, no matter how hard some conservatives wish it. The Clintons’ biggest indiscretions have come after malicious crusaders like Ken Starr launched their witch hunts, not before. Bill Clinton was impeached not for Whitewater, nor for his extramarital affair, but rather for covering up the latter under a fire hose of hostile questions aimed at his personal life in a way never before aimed at any sitting president. History books won’t be kind to Starr literally digging through the Clintons’ dirty laundry. “Cough-gate” is only the latest and best example of the witch hunt and subsequent Clinton “cover-up” — of nothing. It really is legal to get pneumonia these days, even in Kentucky.

The reason that Clinton particularly goads the Judas hunter is that she’s not only a powerful liberal but also a powerful liberal woman, which makes her the ultimate interloper in the eyes of the holy paranoiacs. Before she became the first female presidential candidate for a major party, she was the first First Lady with a graduate degree, let alone one from Yale Law School. Before her, it was a big deal that Pat Nixon decided to wear pants. Clinton’s power, intelligence, ability and stamina ought to be celebrated, not persecuted. The irony about the label “Crooked Hillary” is that she has not just greatness in her, but also goodness. People who see this election solely as a referendum on Trump are missing something. Sure, our friendly neighborhood Putin-puppet is the real Judas. Sure, we’ll all be relieved when we stuff him back into his clown car full of ex-wives and self-tanner. But after November, if everybody votes, it’s not really about him.

After Clinton wins, it’s about a genuine American hero. She has withstood the damning glare of the spotlight because of an ambition, yes, but not an ambition for grubbing loose change from Whitewater sofa cushions like the fabled Crooked Jew. Dare to consider a simpler, less paranoid, less bigoted, less sexist explanation: Clinton has an ambition to lead in order to serve her country, in order to make a positive impact on other people — just like Colin Powell, who taught her how to email.

Except for one distinction: There’s a genuine maternal caring and protectiveness in Clinton that’s evident in her personal relationships and in her public work. Far from something to fear, Mama President is something America could really use for a change.

Austin Ratner is the author of two novels. His nonfiction has appeared in The New York Times, The Wall Street Journal and the Forward. Follow him on Twitter, @austinratner