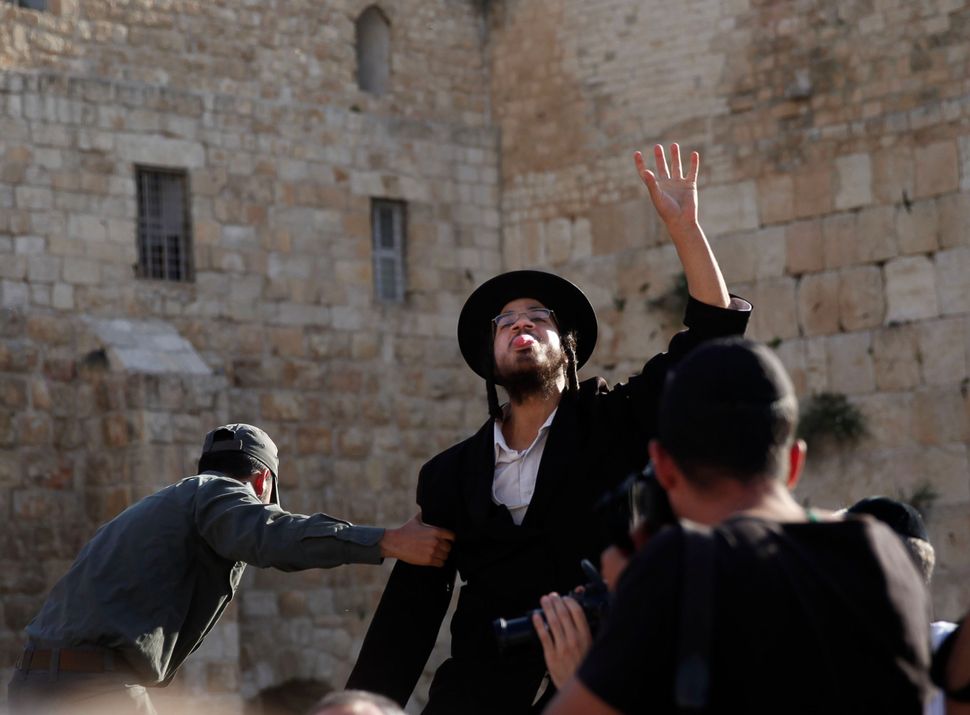 An Israeli policeman grabs an Ultra Orthodox Jewish man as he shouts slogans against the liberal Jewish religious group Women of the Wall. Image by Getty Images

The latest campaign by leaders of the Reform movement of American Judaism to galvanize support for equal-access prayer at the Western Wall, known as Judaism’s “holiest site,” is a morally worthy goal. Given the remarkable degree of religious freedom enjoyed by the vast majority of Americans, an idea encoded in our very Constitution, it is indefensible, inconceivable even, that a site of such longing and historical significance should not be open to the prayers of all.

Unfortunately, the strategy of ensuring religious freedom in Israel by zeroing in on who controls the Western Wall Plaza is the wrong campaign for the wrong time. It would be far more productive in the long run to eschew the Wall for the tens of thousands who seek lives of meaning and substance far removed from the weighted symbolism of an ancient site, which in truth represents an obsolete religious expression that no reasonable person would dare want to return to.

Let me begin by stating my deep and abiding admiration for the leaders of American Judaism’s most liberal movement. As one ordained by Hebrew Union College in New York City, I am always proud of having been educated to be a rabbi by the most open of Jewish institutions. Such openness is essential for the ongoing growth of an increasingly diverse American Jewish community. Among leading American institutions, the Reform movement was the first among its peers to welcome children of interfaith marriage as Jews; to ordain gay, lesbian and transgender Jews as rabbis; to espouse and model a vibrant and relevant Judaism with social justice as a core principle of Torah and the Divine voice; and to consistently support alternative models of Jewish practice to the staid state-sanctioned practice of Establishment Political Haredi Orthodoxy, which is, really, the only way to describe official state religion in the Jewish state.

After all, while contemporary Israel leads the world in economic, technological, agricultural and social innovation, religion, ironically, seems at times to lag more than a century behind. Openness to Jews of all backgrounds, horizontal organizing platforms, tolerance, robust interfaith dialogue, multi-vocal tropes of interpretation, gender diversity in leadership — these are all hallmarks of American Judaism that Israelis have tried to emulate from their American religious peers. While Zionism’s great achievement of the past century was building a Jewish national home and reviving the Hebrew language, American Jews have practiced an open and vibrant Judaism that is more expressive, creative and diverse than in any other era of Jewish history. This is an enormous achievement for both Israeli and American Jewry.

Which is precisely why I believe that the Western Wall, long a symbol of sacrificing, loss, yearning and return, is simply not the appropriate or inspiring locus for a coordinated American religio-political campaign. While it is historically significant, the Kotel is religiously and spiritually irrelevant — unless we actually yearn, collectively, for a return to animal sacrifice.

Perhaps a generation ago, when the world was a “simpler” place and differences among world Jewry were best understood as quaint battles over such weighty matters as theology, prayer and revelation, a Jew’s purported “rights” at the Western Wall was a matter of grave concern for the mass of Jewry.

But who really cares now? It feels more like a symbolic fight than a substantive one.

Let’s face it. The Western Wall Plaza is one of the strangest places to visit as a Jew. Cleared out (with bulldozers) of any remnant of Arab life in East Jerusalem following the Six Day War, it’s a place in time devoid of history, or rather, one might say, configured to tell only one story, which seems like a decidedly un-Jewish approach to a remarkable site of archaeological interest. There is a kind of psychic whiplash that occurs when one time-travels 2,000 years with virtually no story of what came between 70 AD and 1967. That’s just educationally unsound.

Let me be clear. I greatly admire Israel’s justified victory in the Six Day War. I consider it one of the most stunning achievements in all of Jewish history that the Jewish people and a young Jewish army, a mere 20 years after the Holocaust, beat back an attack from a united Arab front and conquered historically Jewish land that had not been in our possession for nearly 2,000 years. This was nothing less than astounding.

But it wasn’t miraculous. It was the achievement, more accurately, of what Winston Churchill might have described as “blood, toil, tears and sweat.” It was a human achievement nearly unparalleled in history.

Which is precisely why the rather macabre and bizarre transformation of the Western Wall Plaza into a Disneyland-like playground of blind-faith, right-wing, political triumphalism ought to be so offensive to the mass of non-Orthodox Jewry (and a whole lot of Orthodox Jews as well) as to make us turn away in embarrassment.

Which generally is what I do.

And which is precisely why the leaders of the movement that ordained me as a rabbi are wrong in taking up the cause of liberating (again) the Western Wall Plaza from extremists — in this tragic case, Jewish extremists.

I say: Let them have it. It’s not as if liberal Jews yearn longingly for the Temple Mount and the reinstitution of animal sacrifice, is it? Since Reform Judaism has nearly dispensed with robes and organs, it’s hard to imagine we want to return to a priesthood-centered Jewish life.

Zionism, my teacher George L. Mosse taught his students at the University of Wisconsin in Madison, was “a revolution against the rabbis.” And as his colleague Gershom Scholem, another refugee from Berlin, taught, Zionism was the opportunity for the Jew to return to History. “History” here ironically connotes the Present. The here and now.

And whenever I am in the Western Wall Plaza, I feel very disconnected from Jewish questions and Jewish responses to the here and now. Unless the “here and now” relates to which “return to Judaism” sect of Orthodoxy cajoles young ones to attend Shabbat dinners with glamorous views of a romantically lit ancient wall or triumphant taunts against Muslims with threats of marching on the Temple Mount to assert Jewish dominion.

The Kotel is as the Kotel does. And does it really matter? So how about a different campaign altogether.

With more than 40 Reform congregations in Israel, from the Galilee to Tel Aviv and from Jerusalem to the Negev, thousands of Israelis are engaging in a contemporary Judaism that is far in spirit and outlook from the sentimental and over-wrought nostalgia of the days of Temple sacrifice. Learning, good deeds, community and a sense of personal fulfillment — these are the values that animate Jewish life today. And life outside the walls of the Old City, where urgent questions of achievement and loss animate the existence of each and every citizen of Israel’s complex and dynamic experiment — that is where our energies ought to be.

We need a campaign to strengthen liberal synagogues and community centers across the country; a campaign to champion tolerance, dialogue, openness and understanding; a campaign so successful and optimistic as to bring down the walls of division.

Perhaps the best way to take down the walls of intolerance at the holiest site in the holiest of cities for the Jewish people is to retreat to the perimeter, to build a vibrant and relevant Judaism, and to let history, and the people, take care of things from there. It worked for Yohanan ben Zakkai 2,000 years ago; it ought to work for us as well.

Andy Bachman is founder and president of Water Over Rocks, a new not-for-profit dedicated to historic memory and civic responsibility. He has served as a rabbi in Brooklyn, at 92Y and NYU.