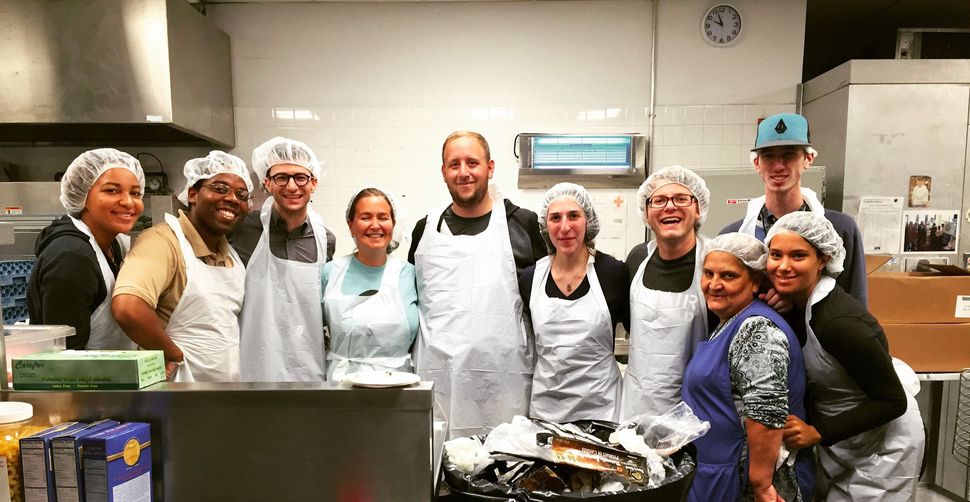 Image by Courtesy of Mordy Walfish

I spent Yom Kippur this year dipping pork chops in olive oil, preparing lunch for the clients of St. John’s Bread and Life, an amazing anti-poverty organization in Bedford-Stuyvesant, Brooklyn.

It marked a significant transformation from my upbringing: I grew up in one of the few religious households in a Conservative synagogue in Hamilton, Ontario, and my family held a certain disdain for “three-times-a-year Jews” — people who only showed up at synagogue on the High Holidays. My family, along with a few dozen other devoted people, would come to synagogue week-in-week-out, sometimes struggling to get a minyan. Each year as the fall rolled around, I would watch in amazement as the synagogue maintenance staff opened up the social hall of Beth Jacob Synagogue to provide overflow capacity to the 600 people who appeared on Yom Kippur. “Where were these people all year?” I wondered. “And why are they coming out of the woodwork today?”

As my relationship to Judaism changed and evolved over the years, I began to find more meaning outside the walls of the synagogue, in particular through the pursuit of social justice. And in recent years I have found myself as one of those three-times-a-year Jews. As I sat in synagogue two Yom Kippurs ago, I wondered what I was doing there. Shouldn’t I be spending this punctuating moment in a way that is more consistent with who I am in the world?

Last year I decided to grab a few friends to spend the day volunteering with me at St. John’s Bread and Life. It was a different kind of Yom Kippur service. And as we did last year, this year we prepared and served breakfast and lunch to hundreds of clients and spent a good deal of time just chatting — with the volunteers, staff and clients of SJBL. The experience felt meaningful, and a good use of our time and Yom Kippur day.

But spending my day with real people enduring poverty and other forms of oppression served as an important reminder to me: The poor and hungry of this city do not exist for me to have a meaningful Jewish experience. The wealth and poverty gaps in this country are a stain on all of us — and a call to action that we cannot in good conscience ignore.

And with the words of Isaiah from the Yom Kippur haftorah ringing in my ear (“Is this not the fast I will choose… to share your bread with the hungry… “), I reflected on my own life and service over the past year. I am no hero for spending my Yom Kippur volunteering, and I know enough to know that this experience has little effect unless I keep coming back.

Though I spend my days working behind the scenes to foster a deep culture of meaningful service in the Jewish community with Repair the World, in many ways I am a “three times a year” volunteer; over the past year I’ve volunteered fewer than a dozen times. Each time I have volunteered at SJBL, I have been humbled by the daily “minyan”-goers – the staff and volunteers who are there day-in-day-out, no matter the weather, no matter the holiday. And I wonder why I haven’t done better. And how I can do better. How much more useful I will be when I understand the kitchen at SJBL as well as I understand my own. This Yom Kippur service is only useful if it’s a wake-up call, to do better, to be better.

Most of the clients at SJBL are people of color, as are most of the staff and volunteers. The boundaries between them are often porous — many of the staff and volunteers are former clients. It’s hard to volunteer and not ask how and why our broken food systems disproportionately affect people of color (for example, of the 50 million food insecure people in the U.S., 10.6% are white). I’ve been thinking a lot about service in the context of racial justice and the work that I do with Repair the World. I am painfully aware that service is not going to solve racism. Structural racism is deeply embedded into every system that makes this country function. But I do think that service has a role to play.

Though so many of us good-intentioned white folk consume and post all the right media, sign all the right petitions, and show up at all the right rallies (trying not to take up too much space), all too often we don’t actually have real relationships with those who experience the consequences of interpersonal and structural racism on a daily basis. Some of us have never had a conversation with someone who fears for their life if they run a red light and get pulled over by the cops; some of us have never talked about the Mets with someone whose unarmed father was shot by the police. We’ve never broken bread with someone whose mere presence — by virtue of the color of their skin — seems to evoke the fear of so many others.

Service across communities can open this door, even as it also, and importantly, reinforces the experiential gap that whites and people of color face daily in this country. It forces us to listen to each other’s stories, no matter how painful, no matter how much we may want to repress them.

And while the fight for dismantling racism is happening — and needs to happen — at every level, people are hungry and we need to work tirelessly to get them the food they need to not only survive but also thrive.

As Yom Kippur ends and the gates of heaven close, and with the pork marinade still stuck to my shoes, I pledge to do better in the year ahead.