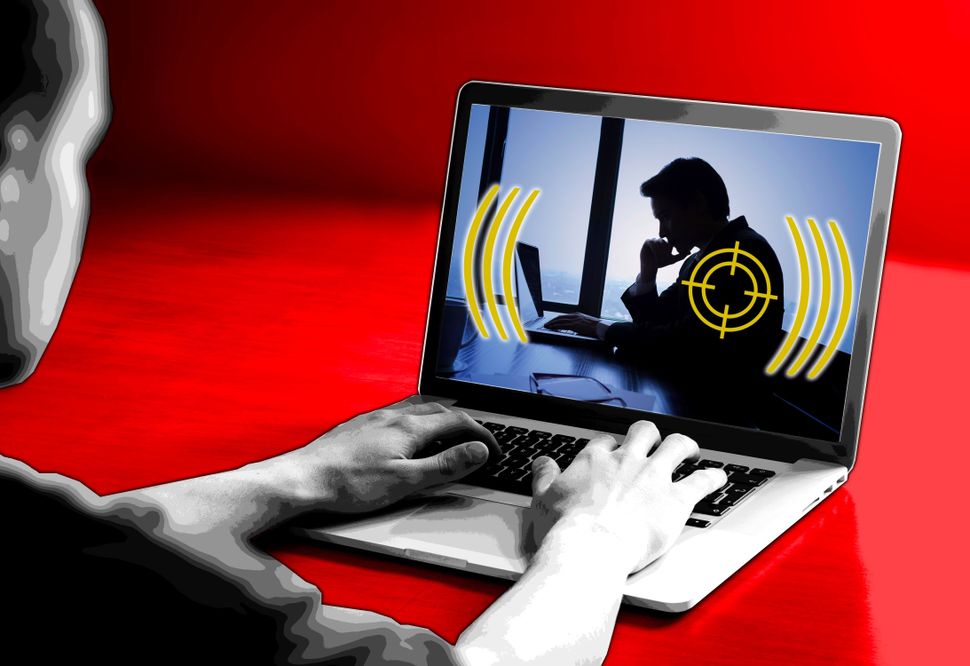 After decades in journalism, you would think that I would be used to this by now. I weathered a barrage of hateful emails when, as editorial page editor of a major regional newspaper, we took a tough line against President Bill Clinton during his impeachment scandal in the 1990s. I had to deal with nasty reactions to the board’s endorsement in a controversial and racially charged local election.

Never mind the fact that, as editor-in-chief of the Forward, I have been the target of vicious criticism from both the left and the right questioning the core of my being — that is, my very identity as a Jew.

But nothing quite prepared me for the slew of emails, five altogether, sent in the early hours of October 10 with messages such as: “Shana Tova, Dirty Hooknosed KIKE rat! MAY IT BE YOUR LAST!”

And: “You would make a nice lampshade.”

And: “Trump supporters HATE KIKES! HAIL TRUMP!” That one was accompanied by an image of a Nazi soldier holding a gun to an image of my head photo-shopped onto a concentration camp uniform complete with the six-pointed yellow Jewish star.

The only reason that I was not more shaken and horrified is that I know many other Jewish journalists have been on the receiving end of similarly disgusting emails, phone calls, and most virulently, messages transmitted through social media, especially Twitter. The extent of this plague is now codified, thanks to a report released today by the Anti-Defamation League’s Task Force on Harassment and Journalism.

The report proves beyond doubt that anti-Semitism against journalists on social media has increased dramatically during this election campaign and that Jews are by far the main targets. While the report takes pains to say that this surge is not caused directly by the Donald Trump campaign, it is driven in large measure by those who identify with his candidacy. (See above.)

And while the ADL is postponing its recommendations for counteracting this cyber hate until after the election, it’s clear to this reader that Twitter should be doing much more to uphold its own standards of conduct when it comes to confronting anti-Semitism on its platform.

The task force analyzed keywords to conclude that from August 2015 through July 2016, there were 2.6 million tweets “containing language frequently found in anti-Semitic speech.” Each one of the top ten most targeted journalists was Jewish, and they received the vast majority of the anti-Semitic tweets.

Not only that, but the ADL found that just 1,600 Twitter accounts generated 68% of the anti-Semitic tweets. Yet only 21% of those accounts were suspended during the last year. So we have a relatively concentrated cadre of people spewing hate online and most — nearly 80% — are getting away with it.

Clearly, Twitter needs to be far more aggressive in monitoring and responding to cyber hate, and to be more transparent about its activities in doing so. The company won some praise last month when it suspended 235,000 accounts for violating the social media platform’s “policies related to promotion of terrorism.” It acted in response to the fear generated by Islamic State terrorists, who have grown terrifyingly good at using social media to recruit and spread their hateful messages.

But Twitter – indeed, all of us – have to recognize that the threat of violence from homegrown hate here in America is becoming far more immediate than whatever is emanating from ISIS. A fascinating study released last month by J.M. Berger, a fellow with George Washington University’s Program on Extremism, made this chilling point.

“On Twitter, ISIS’s preferred social platform, American white nationalist movements have seen their followers grow by more than 600% since 2012,” Berger wrote. “Today, they outperform ISIS in nearly every social metric, from follower counts to tweets per day.”

More than almost any other topic.

As I said, the ADL report carefully declined to blame Trump or his campaign for the surge in anti-Semitic attacks on journalists, saying that there is “no known causal relationship.” But the report did detail a spike in attacks by self-appointed Trump surrogates at specific points in his campaign: When he blamed Bernie Sanders for violence at a Trump rally. When he refused to disavow the Ku Klux Klan. When Jewish journalist Julia Ioffe published her well-researched, rather damning story about Melania Trump.

Come to think of it, those horrible emails were sent to me hours after the second presidential debate, when Trump equated sexual harassment against women to “locker room” talk and threatened to jail his opponent if he made it to the White House.

Even if he does not bear direct responsibility, Donald Trump has unleashed and empowered a dangerous wave of anti-Semitism and hate that appears to be focused on Jewish journalists who are simply doing their jobs. The American Jewish community must take this threat seriously. It’s not coming from Muslims overseas. It’s not coming from Palestinians. It’s coming from our fellow citizens. And I’m afraid that, no matter what happens on November 8, unless we act boldly and creatively, it’s not going away.