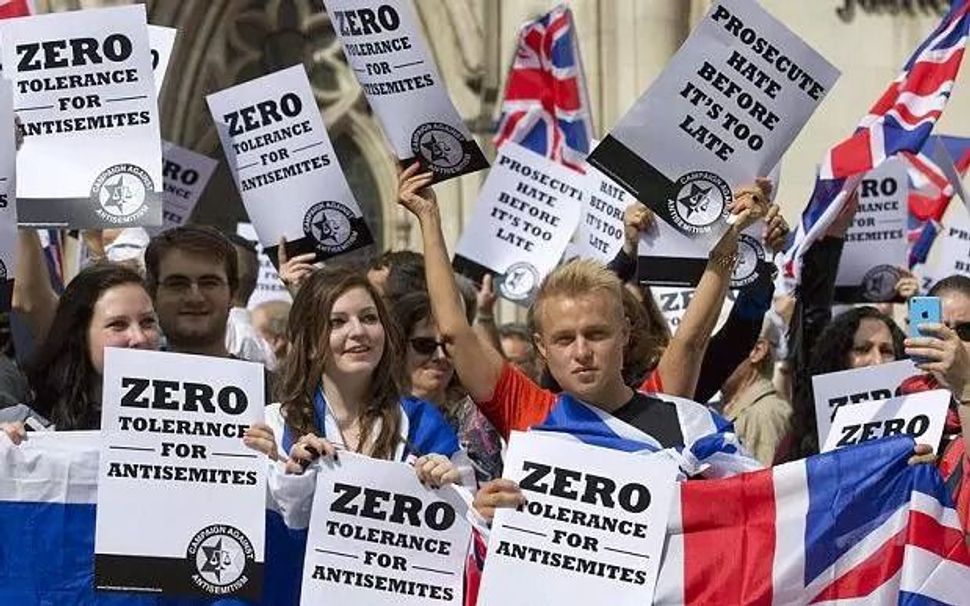 A few months ago, here in London, I was at a party talking to a man who worked in artificial intelligence. We were discussing what a robot-filled future might look like, but when he found out I was Jewish we got onto the subject of Jews.

The AI researcher admired Judaism because it was the truest religion, he said, and Jews really know how to look after their own. “Do you think,” he asked me, “That Israel could become the most powerful country in the world?” With its eight million inhabitants, the Jewish state was too small and not important enough, I said. “I do,” he replied, smiling slightly as if he were in on some sort of secret. “Where there is a will and a plan…”

One of the charges leveled against British Labour Party leader Jeremy Corbyn in a recent parliamentary report on anti-Semitism is that he “does not fully appreciate the distinct nature” of contemporary prejudice against Jews. Anti-Semitism in the post-World War II era, the report explains, is a slippery thing: “Unlike other forms of racism, anti-Semitic abuse often paints the victim as a malign and controlling force rather than as an inferior object of derision, making it perfectly possible for an ‘anti-racist campaigner’ to express anti-Semitic views.”

I moved back to London in January, after 10 years living in Mexico and Israel. Before my return to the United Kingdom, I steeled myself for “those conversations” about Israel, for arguments and moral disapproval, or for meeting uncritical advocates for whom the Jewish state can do no wrong. But those first months were punctuated by something that had never before been my experience of the country I think of as home. I didn’t really want to be thinking it, and I certainly didn’t want to say it out loud. Perhaps I was as confused as Corbyn. Was it actually, really, anti-Semitism?

George Orwell wrote in 1945 that “there is more anti-Semitism in England than we care to admit… It is at bottom quite irrational and will not yield to argument.” If prejudice against Jews was as widespread and under-the-surface as Orwell claimed in 1945, in 2016 it certainly seems to be coming out of the woodwork. Throughout this past year, anti-Semitism has been bigger news in the U.K. than I ever remember it being when I was growing up. As the Labour leader dealt (or didn’t deal, depending on your point of view) with accusations of anti-Jewish bigotry in the party, the word “anti-Semitism” has often appeared on newspapers’ front page. The debate over the nature of such prejudice, and the line between “anti-Zionism,” “anti-Semitism” and being “anti-Israel,” was stirred up in parallel, together with the implicit notion that Jews must take a position on Israel to be trusted.

For me as a Jew, this has all seemed personal, and I have felt caught between the news agenda and a number of uncomfortable personal interactions. There was an occasion when a man behind the counter of a café found out that my husband and I are Israeli, and seemed to immediately jump to the “Protocols of the Elders of Zion,” just like the AI researcher. “Do you know who else is a Jew? The guy who owns all the media, you know, what’s his name, the Australian.” He was referring, of course, to Rupert Murdoch, who happens not to be Jewish. I told him as much, but he insisted we stand there as he Googled the answer on his phone.

The reasons these encounters caused me discomfort were subtle. They weren’t like reports about Labour removing Hebrew from Corbyn’s Passover message lest it sound too “Zionist,” party members tweeting about Hitler and big-nosed Jews, or Jewish Labour MPs receiving vile abuse online. Like a woman sensing that a man’s eyes have lingered a little too long on her body, I wasn’t sure whether I was just being paranoid or difficult, or whether I had a point. Perhaps the AI researcher was just interested in Jews and I had mistaken curiosity for prejudice. Perhaps Rupert Murdoch happened to be the first name that popped into the mind of the man at the cafe.

Research indicates that anti-Semitism is on the rise in the U.K. and Europe, certainly in the eyes of many of the U.K.’s 270,000 Jews. In 2016, incidents of anti-Semitism rose 11% in the first six months compared with last year, according to the Community Security Trust.

And here I was back home, and for the first time in my life I caught myself wondering what would happen if the “Never Again” scenario were to happen again. Do non-Jews really see me as so different? Would non-Jewish friends help me?

I felt like a cliché, but I wasn’t the only one having such thoughts. Over dinner with a Jewish friend for whom Judaism is by no means a priority in terms of identity, a discussion about Zionism ended with said friend saying, almost in a whisper and with a smile of embarrassment, “Well, perhaps we do need Israel there, just in case.”

The parliamentary report describes in great detail the overt abuse volleyed at Jewish politicians, which is very clearly anti-Semitic. There are moments, however, when the prejudice is harder to pinpoint. Sometimes I sense myself reflected as a Jew in the eyes of others, tied up with ideas of wealth, power, desires for world domination, cruelty and greed. Or I see their fascination with perceived Jewish success. There is a joke I like to tell to deal with the burden of these associations: “If Jews control the world, nobody invited me to the party.”

It’s hard to tell for sure whether what I see in those interactions is really there, or whether it is a reflection of my own fears that anti-Semitism lurks just under the surface. In Israel, the Jewish majority watches like a hawk for anti-Semitism around the world. Reports of it make headlines on the evening news. Its existence is taken as a given, at once a cause for distress and a justification for occupation. It is sometimes paranoia, government propaganda, a boon to those who wish to paint the Jews as moral in comparison to immoral, anti-Semitic Arabs. But it is also borne of years of the most brutal prejudice — as well as the more slippery, intangible kind.

This penchant for watching for signs of anti-Semitism is reflected in diaspora media, too. Perhaps being on high alert is the right thing to do, like women chipping away at sexual harassment by calling it out every time a touch or a word makes them uncomfortable. Still, even when you’re on high alert, how do you pinpoint the moment when you realize that someone has been speaking to you as a Jew, with the web of associations that this carries unfurled before them, and around you, like an invisible tapestry?

Alona Ferber is a writer and editor currently based in London, after working as a journalist in Israel. This piece reflects her own opinions and not those of her employer. Follow her on Twitter, @paperdispatch