Israel Has Disappeared From the Presidential Campaign. Should We Care? 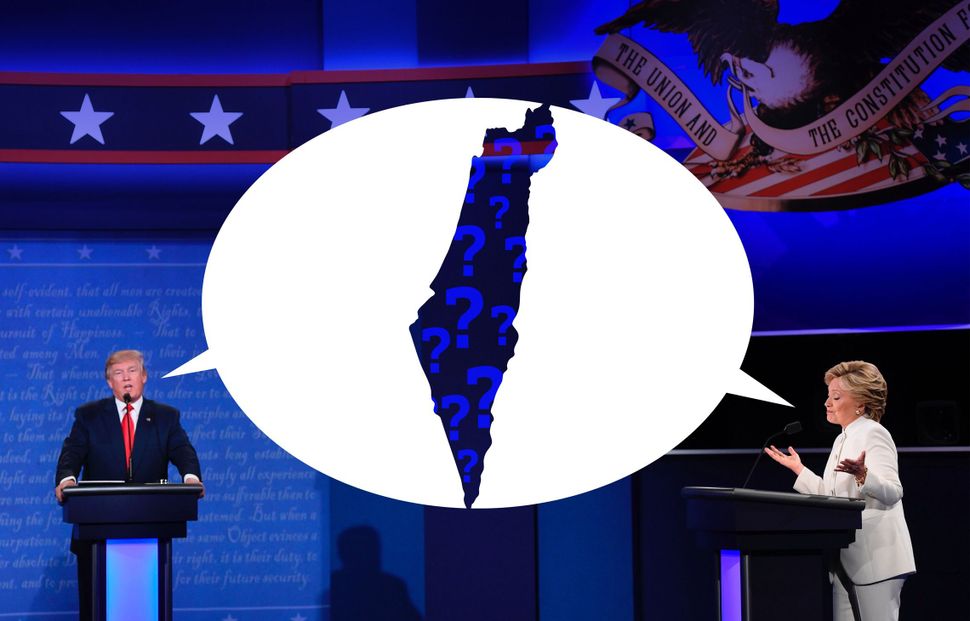 This presidential election cycle has seen an unprecedented number of words and phrases enter the campaign lexicon, repeated again and again until they take on a life — or a hashtag — of their own. Loser. Crooked. Deplorables. Nasty woman. Build the wall. Putin’s puppet. And a few other choice ones I’d rather not repeat here.

Neither do the Palestinians.

The Israeli-Palestinian conflict has largely escaped discussion by candidates or even their surrogates, has been ignored at the three main presidential debates and has been treated with nothing stronger than predictable bromides otherwise. Early in the primary season, most of the candidates paraded themselves before the American Israel Public Affairs Committee, to varying effect, but since then there has been no full-throated conversation about the Middle East issues that used to dominate any discussion concerning foreign policy.

No doubt some in what is known as the “pro-Israel” lobby are cheering. They shouldn’t be for long.

While there are good and understandable reasons for this current omission, the disappearance of American attention and energy could have haunting consequences, strengthening the status quo so cleverly maintained by political leaders on both sides of the conflict, stifling creativity, ideas and strategic planning, and ensuring that any potential resolution is more difficult to achieve.

It’s true that even normal presidential campaigns are not ideal venues for serious policy discussions, and the 2016 race is, tragically, far from normal, in tone and substance. I’d rather see a desperate candidate say nothing than pander and proclaim, or make a promise he or she cannot actually keep.

There’s one obvious reason that finding a way around the Israeli-Palestinian impasse hasn’t made headlines: It isn’t Syria. It isn’t a conflict destroying a nation, flattening its cities, killing nearly half a million of its people, creating the largest flow of refugees since the last world war, and rendering the normal global mechanisms to stop such slaughter utterly useless.

The plight of the Palestinians who have suffered under nearly 50 years of occupation, the eternal need for Israel to have secure, recognized and meaningful borders — all this pales in comparison to the chaos next door, and, of course, emboldens those who say that if Israel surrenders or swaps any land right now, it will only bring the chaos closer.

But clinging to the safety of the status quo is a dangerous calculation for both Israelis and Palestinians. Ironically, though President Obama is scorned by many as being “anti-Israel,” history may conclude the opposite: that in fact he has done little to alter the status quo between the two peoples vying for the same land.

Other than his achievement of a nuclear deal with Iran (vehemently opposed by Israeli Prime Minister Benjamin Netanyahu), Obama in his second term has done no more than occasionally criticize Israel — sometimes harshly — for expanding settlements, while inking a deal to dramatically increase military aid for the next 10 years. Secretary of State John Kerry’s tireless efforts to negotiate a peace deal ended up changing nothing on the ground. Settlements on land beyond the green line that Palestinians hope one day to govern are growing steadily, without penalty.

Neither has the president meaningfully prompted change in Palestinian leadership. He has rebuffed efforts by Palestinian Authority President Mahmoud Abbas to gain recognition for statehood at the United Nations, true, but otherwise he has done little to prompt political and economic reform, or reconciliation with Gaza, or an end to the coddling of those who commit terror.

There’s some truth to the strong critique of Obama’s “disquieting silence” published early in October by Khaled Elgindy of the Brookings Institution: “Not only has he failed to live up to the high expectations he set out at the start of his administration, Obama is on his way to becoming the first U.S. president in more than four decades to break no new political ground in terms of resolving the Israeli-Palestinian conflict.”

But as Obama and others before him have noted, Washington can’t want a two-state solution more than the folks sitting in Jerusalem and Ramallah. For all the hostility between them, Netanyahu and Abbas are playing a version of the same game — dispensing with rivals and maneuvering to retain power, while enunciating no clear vision for the future and creating no viable strategy to get there.

No wonder the candidates aren’t talking about the conflict. What is there to say?

Actually, a lot. “While we can do little immediately to bring about a two-state solution, we should at least try to preserve its prospects for when conditions might be ripe,” Philip Gordon, who served in the Obama administration, wrote in Politico last year.

“It certainly means trying to preserve the viability of a Palestinian entity that eschews violence, recognizes Israel and respects past agreements, as well as trying to persuade Israel — its public, if the current government is out of reach — that there is no way it can remain a secure Jewish and democratic state — at peace with its neighbors — if it tries to govern the millions of Palestinians in Gaza and the West Bank.”

This election campaign has seemed endless, but it will end soon enough. There’s speculation that, once it is over, Obama will take advantage of his freedom from practical accountability in his final months to take some bold, even controversial, step to preserve the possibility of a two-state solution. That would surely bring the Israeli-Palestinian conflict back into the headlines — where, under the right circumstances, it will belong.

Israel Has Disappeared From the Presidential Campaign. Should We Care?