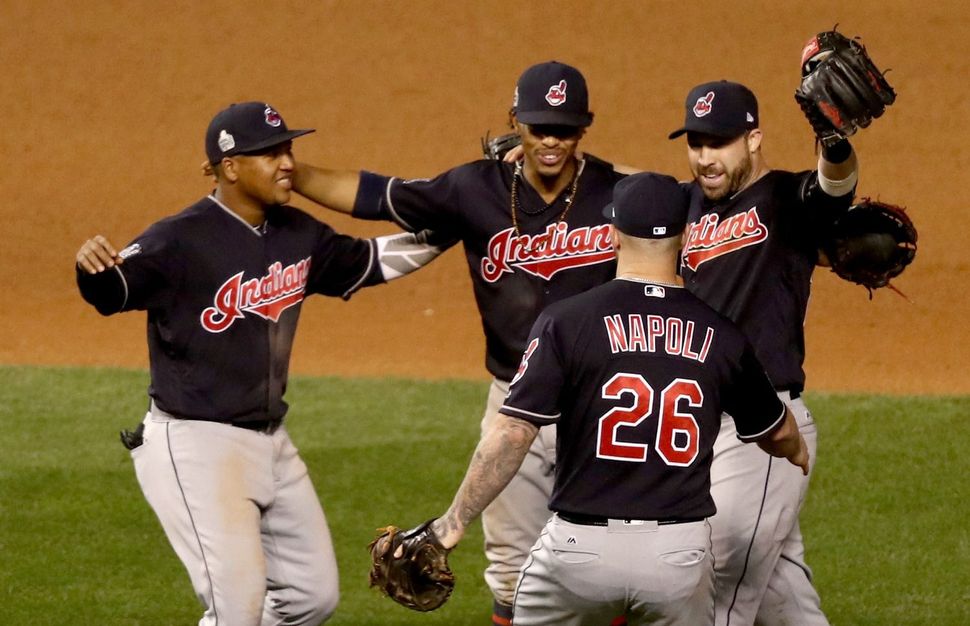 Every so often there’s a brief event, a flash of light in a darkened public square, that helps illuminate the mysterious insider-yet-outsider status of the Jew in American society — and the even greater mystery of how the half-Jew fits into Jewish life. The triggering event can be something as large as volunteering to serve in Israel or taking on the yoke of Torah law — or, as we’ll see in today’s discussion, something as small as a fond memory of a Jewish wedding dance.

To illustrate, let’s consider Game 4 of the World Series, October 29 in Chicago. The Cleveland Indians were playing the Chicago Cubs. Both teams were desperate to win the best-of-seven championship that had eluded them both for generations. The game was closely fought until the seventh inning, when Cleveland second-baseman Jason Kipnis hit a massive three-run home run that secured the Indians’ path to a 7-2 victory, and possibly to the championship.

After trotting triumphantly around the bases, Kipnis returned to his team’s dugout. Once inside, he took some congratulatory high-fives, then perched himself like a toddler on the locked forearms of two burly teammates who proceeded to dance him down the length of the dugout. They do it after every Kipnis homer. Sportswriters call it the Kipnis Joy Ride. (You can watch the Game 4 dance here.)

Right after the game, Fox Sports on-field reporter Ken Rosenthal grabbed Kipnis, the star of the game, for an interview. Rosenthal asked the Chicago-born slugger how he felt about returning to his hometown and having his friends and family watch him pummel their beloved Cubbies. Then they talked about some baseball technicalities. Finally, told he had time for only one more question, Rosenthal asked: “What was that dance you were doing in the dugout? Was it a victory celebration for hitting the home run?”

Kipnis grinned. “Every player has his own thing for celebrating a home run,” he said. “This is my favorite. It’s sort of like the wedding chair.”

As Rosenthal smiled appreciatively, the voices of the Fox Sports announcers in the broadcast booth, anchor Joe Buck and color commentator John Smoltz, came in over the visual of Kipnis and Rosenthal. “Wedding chair? That’s a new one on me,” Buck said with a chuckle. “Do you know what it is?”

The wedding chair, also called the chair dance, is a Jewish folk custom, universally beloved, de rigueur at weddings, sometimes seen at bar and bat mitzvahs. The bride and groom are seated in chairs and hoisted up in the air like Torah scrolls by clusters of guests gripping the chairs’ legs. The guests then dance around while pumping the happy couple up and down through the air with the greatest of ease. The bride and groom hold on for dear life, often clinging to each other by clutching opposite ends of a cloth napkin.

If you’re seeing it for the first time, it can be alarming. Non-Jewish brides who haven’t been briefed beforehand describe the experience as terrifying. On the other hand, Jews who’ve grown up watching it, as nearly all do, are often unaware that it isn’t a universal human practice. Like bagels and lox, like “chutzpah” and “gevalt,” they grow up assuming that this is how everyone lives. Once having learned to assume that we’re just like everyone else, we go on to assume they’re just like us. Most don’t spend enough time pondering things Jewish to notice what sets them apart.

And yet the custom continues through the Jewish line, generation after generation — traditionalist Jews, assimilated Jews, half- and one-quarter Jews marrying non-Jews, and their children’s children — without, it seems, migrating out of the Jewish line into the general population.

Kipnis, 29, a hard-slugging two-time All-Star player, is one of five active Major League Baseball players with a Jewish father and a Christian mother. (Of 750 major leaguers currently active, 11 have one or two Jewish parents, or about 1.5%.) Three of the five patrilineals — Ian Kinsler of the Detroit Tigers, Ryan Braun of the Milwaukee Brewers and Sam Fuld of the Oakland Athletics — identify themselves wholeheartedly as Jews. They reach out to the Jewish community, lend their celebrity presence for good causes and try to offer themselves as role models to Jewish youngsters to encourage participation in sports and healthy living. Even traditionalists who don’t consider them Jewish by rabbinic law tend to relax for a change and take pride. The players, in turn, testify that embracing their Jewishness enriches their lives while building their fan base.

A fourth patrilineal, Paul Goldschmidt of the Arizona Diamondbacks, is described as a religious Christian who generally spurns outreach gestures from the Jewish community. Those who know him say he’s simply not interested.

Kipnis, the fifth, is in a category of his own. He has described himself as both a practicing Catholic and a Jew. According to the online magazine Jewish Baseball News, Kipnis was approached by the bimonthly Jewish Sports Review in 2008, while he was a college sophomore, and asked if he would be willing to be included on an updated list of Jewish athletes. He agreed. But in 2011, when he debuted as a Major League player with the Cleveland Indians, several observers saw him sporting a crucifix around his neck. Since then his name has quietly, abruptly disappeared from the various fan groups’ lists of Jewish ballplayers.

The Jewish sports fan community follows a modified version of Israel’s Law of Return in deciding whom to list: You must have at least one Jewish grandparent or be converted to Judaism and not follow another religion. Israel formalized the rule in the early 1960s in response to the case of Brother Daniel, a Jewish-born Polish priest. He’d come to Israel in 1958, fleeing anti-Semitism, but was denied the Jewish right of automatic citizenship because he’d become a Christian. The case touched off the furious “Who is a Jew” debate that’s been tearing the Jewish community apart ever since.

Jason Kipnis and tens of thousands like him are American Jewry’s Brother Daniels. They demonstrate in a thousand tiny ways that they’re ready to join us and swell our ranks. But America isn’t Israel. Those we spurn don’t stay and fight. They simply slip away and mind their own business. It doesn’t have to be that way. We could find a way to make a place for them, enrich their lives while they enrich ours, and become the great tribe that was promised to Abraham.