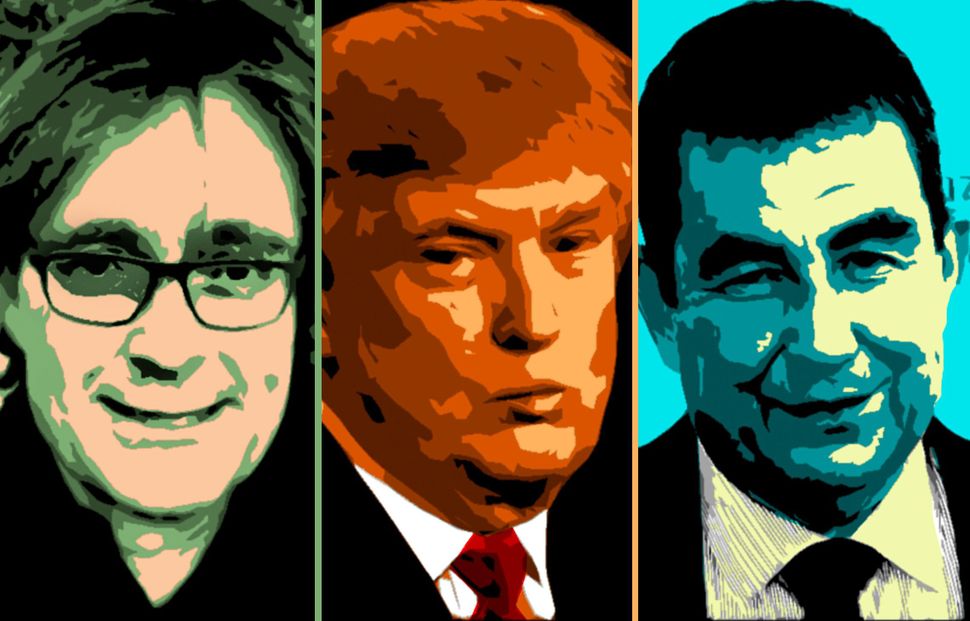 For centuries, victims of sexual harassment and assault — some men, mostly women — have been muzzled by society’s demand for silence. Occasionally, there’s been an inflection point, a moment when a case is so public or so egregious that it breaks the silence, at least temporarily, and victims suddenly feel able to speak. Anita Hill’s testimony against Clarence Thomas in 1991 was one of those moments.

We are experiencing another one now. Think of the women this year who have bravely come forward to tell stories of alleged abuse and harassment in the Jewish community alone: Sara Kabakov, who said she was 13 when Marc Gafni, then 19, began to molest her. And Danielle Berrin, the Los Angeles journalist who described being assaulted by Israeli writer Ari Shavit, a disclosure that prompted another woman to share her story with the Forward.

Or consider the courage of more than a dozen women who said they were groped, kissed, spied on or endured sexual advances against their wishes by Donald Trump.

If there’s any consolation to the ugliness of today’s politics, it’s in hearing the determined voices of these women and thousands more ricocheting around the public square, awakening our national conscience.

But these women tell only half the story. What about the men accused of behaving so badly? Here, for the most part, courage has been replaced by cowardice, insults, manipulation and, in rare instances, genuine contrition.

Nobody deflects criticism with more abandon than Trump, who seems to relish in the chance to demean, ridicule and dismiss his accusers. His defense takes a numbers of tacks, none of them consistent.

Sometimes he says that the women’s stories are “total fiction.” “They have no witnesses,” the GOP presidential candidate declared last month in North Carolina. “There’s nobody around… Some are doing it for probably a little fame. They get some free fame. It’s a total setup.”

Or he asserts that he’s never heard of his accusers. Or he mocks their appearance and desirability, as if to say their claims aren’t credible because the women aren’t attractive enough for him. “When you looked at that horrible woman last night,” he taunted, referring to one of his accusers, “you said, ‘I don’t think so.’”

And, of course, he threatens to sue them. Big league.

An accused abuser like Marc Gafni, the former rabbi and spiritual leader whose career has been dogged by allegations of sexual improprieties, is the anti-Trump. In a long defense published by the Forward online in early November, Gafni doesn’t deny physical contact with Kabakov (he called it “necking” and said she was 14 when it started) or mock her appearance. Instead, he argues that his “relationship” with her was consensual, an expression of teenage love, not an example of sexual molestation.

This attempt to recast and reframe ignores the central, damaging truth about these encounters: What matters is how the man’s behavior is perceived by those who are victimized.

“While Gafni might feel it was a consensual thing, he doesn’t know what’s going on in her mind,” Alissa Ackerman told me. She’s an associate professor of criminal justice at the University of Washington at Tacoma who has researched sexual abusers, and I asked her to review Kabakov’s essay and Gafni’s response.

In Gafni’s case, the extreme age difference between the two — five years in the life of a teenager is like decades for an adult — compounded the unequal power dynamic.

But this willful ignorance is not confined to teenagers. Consider what happened to Berrin, who at first did not name Shavit when she described a sexual assault in a professional setting. It didn’t take long for the obvious to be acknowledged, and Shavit — author of the acclaimed book “My Promised Land” — outed himself, but with the kind of equivocations that only underlined his cluelessness.

“Yesterday,” Berrin wrote on October 28, “Ari Shavit offered an apology — to no one in particular — for ‘misconstruing the interaction between us,’ which he says he understood as ‘flirtation.’ His claim is absurd. The only thing I wanted from Ari Shavit was an interview about his book. No person of sound judgment would have interpreted his advances on me as anything other than unwanted, aggressive sexual contact.”

Within days, the Forward published another account of sexual misconduct, this one from a female J Street staffer. And this time, Shavit did the right thing. Hours after the publication of our story, he resigned from his positions at Haaretz and on Channel 10 TV in Israel. Ashamed, he took full responsibility for his actions.

“For years I did not understand what people meant when they spoke of privileged men who do not see the damage that they cause to others. Now, I am beginning to understand,” he said.

There’s still something self-serving in Shavit’s newly found enlightenment, but if Berrin is willing to accept his apology, so am I. Shavit acknowledged that he, alone, was responsible for his behavior — not the woman involved — and he is willing to pay the very real professional cost for his mistakes.

Would that the other men in the news, and the many more we do not hear about, could undertake the same “accounting of the soul,” as Berrin described it. As women are more and more able to speak for themselves, men need to learn to listen to others, especially the ones they hurt.