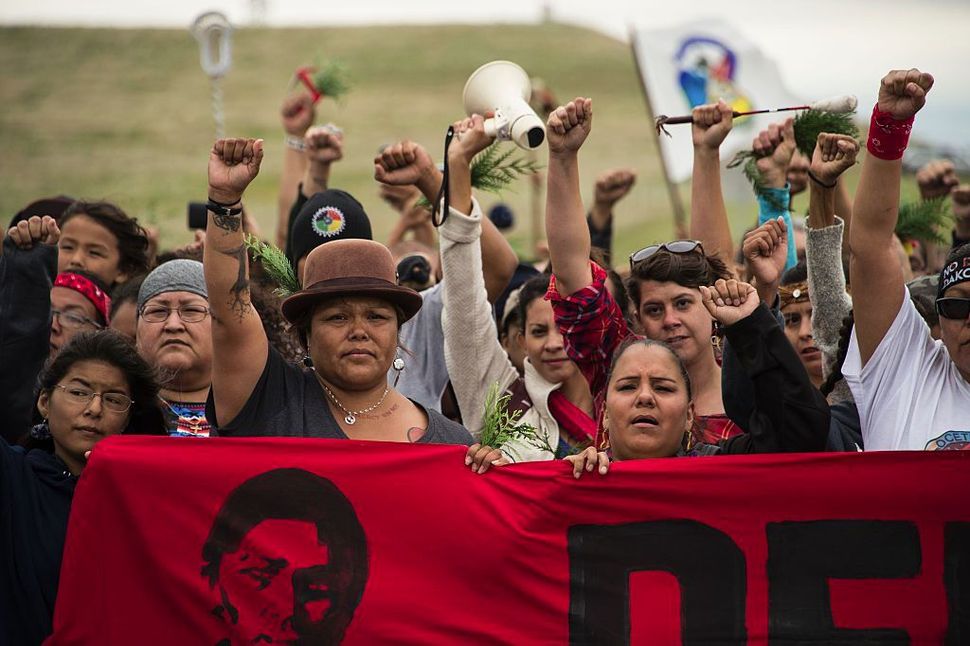 If you’ve been following the news or social media recently, you’re probably familiar with the struggle against the Dakota Access Pipeline (DAPL). If not, here’s a run down.

Energy Transfer Patterns, a privately held company, is attempting to build a $3.7 billion dollar pipeline from the Bakken oil field in North Dakota to a refinery near Chicago. The project, which is being executed with the help of the U.S. Corps of Army Engineers, would span 1,1720 miles, and would threaten Native American lands and contaminate the water supply in areas with large Native American populations—contamination that other communities, like the mostly-white Bismark area, managed to avoid.

In opposition to the pipeline project and the resultant damage, the Standing Rock Sioux tribe and thousands of Native American and non-Native supporters and allies have set up camps in Cannon Ball, ND. Acting as water protectors at a number of resistance camps and prayer camps, the protesters are fighting for their right to clean land and water, and have remained unarmed and peaceful. In response, they have been assailed by a highly militarized police force, and violent tactics such as mace, tear gas, rubber bullets, and over 400 arrests as of November.

The water protectors, however, have no intention of backing down, and their efforts may be rewarded. The US Army Corps of Engineers announced in September that it was temporarily halting construction permits, and President Obama has issued vague statements at the beginning of the month alluding to “whether or not this can be resolved in a way…that is properly attentive to the traditions of the first Americans.”

However, those advancements, no matter how hard won they were, are not nearly guarantees, and the water protectors struggling at Cannon Ball and the surrounding areas need solidarity and support now more than ever.

Tikkun olam, the sense that all human life is intrinsically valuable and deserves dignity, and the notion of stewardship over the land are all central tenets of what it means to exist and practice as a Jew. This has led many to lend their support to the Standing Rock struggle, with methods ranging from physically showing up to stand in solidarity, to donating money, time, or resources, to contacting lawmakers to stand with Native Americans against the pollution of their land and water. A good list of steps to take can be found here.

A number of Jewish individuals and groups, though, have made incorporated solidarity with Standing Rock into their spiritual and communal Jewish practices.

These are three examples:

Mónica Gomery, Jessica Rosenberg, and Mackenzie Reynolds, three Rabbinical students, have developed a version of the Hashkivenu—the second paragraph of the Shema, and a petitionary prayer to be able to lie down in peace at night and wake up the next morning—specifically for the struggle at Standing Rock. It can be found here.

On their prayer, they had this to say:

“As clergy in training, one of the most moving and inspiring elements of the struggle taking place to protect the sanctity of water and sovereign Native land at Standing Rock is that it is a nonviolent prayer movement. Those participating at the encampment are praying all day every day. As the Water Protectors request support of those in solidarity, such as donations for legal defense and winterizing the camps, they simultaneously request solidarity prayers. Based on the request for solidarity prayers, we created an interpretive Hashkiveinu, a prayer for protection and guidance. We have been invited to root into our own traditions, to pray our own prayers, and to offer these prayers in solidarity, as spiritual accomplices in the struggle for clean water and land rights. We ask that this Shabbat, prayer leaders, rabbis and lay leaders offer this Hashkivenu, or any other prayers for Standing Rock that are on our hearts. It is meant for use anywhere and everywhere, and with an encouragement to share with rabbis, congregations, and places that might not already be talking about Standing Rock or environmental justice. We invite people to do this both to draw attention to the action at Standing Rock, to spread information and tell the truth about the devastating events there, and also to truly pray: for the transformation of the world; for valuing life over profits; for Native sovereignty; for the protection of people, land, sacred sites, and water.”

Jonah Sampson Boyarin, Jessica Rosenberg, and MJ Kaufman have called for a day of public Jewish fasting on Thursday, November 10th. The Facebook event can be found here.

On the fast, they had this to say:

“The solidarity principles coming from the indigenous leadership at Standing Rock guide all allies to 1) pray in our own traditions and 2) amplify indigenous voices. How can Jewish tradition guide us in this moment? Our rabbis of the Talmud did not live in a world where access to water was troubled by the acts of human hands, by human greed. In Masechta Ta’anis they prescribed public fasting to save the people from drought, emphasizing our collective interdependence and culpability, and requiring the entire community to petition for Divine mercy. Today, we know that indigenous people, poor people, and people of color, like those at Standing Rock or in Flint, Michigan, are the first to bear the catastrophic costs of the poisoning of our natural water resources. And, as our rabbinic tradition teaches, we are all ultimately reliant on access to water and the earth’s well-being; we are also collectively responsible for its healing. We must respond to the urgent call to protect clean water and fight for environmental and climate justice. And we know that to show up effectively, we must follow the leadership of the people most impacted. It is in this spirit of solidarity with indigenous leadership at Standing Rock, and rooted in our own tradition, that we invite you to join us for a Day of Jewish Public Fasting for Standing Rock on Thursday, November 10th. Synagogues and individuals are invited to take on this nationally coordinated, halachically voluntary fast. We will be providing resources for study and action in support of Standing Rock.”

3) Organizing as Jews in Petition for Standing Rock

The Network of Spiritual Progressives and Tikkun Magazine have opted to organize around the Jewish spiritual leaders in a petition, wherein Jews can express their stand with the water protectors as a part of the Jewish community. The petition can be found here.

On the petition, the Network had this to say:

“As Jews, we, the undersigned rabbis, rabbinical students, cantors, community members, as well as unaffiliated Jews know that our Torah teaches us to stand on the side of the persecuted and to protect the earth, to work for social, economic and environmental justice and to be in awe of the universe. We are moved by our faith to stand with the water protectors of Standing Rock, who have awakened the conscience of many in our nation and around the world. In opposing the Dakota Access Pipeline that would carry oil from North Dakota to Illinois, they have resolutely declared that they are not protesters but protectors and defenders acting out of a sacred obligation that affirms “water is life.” And they have stood to protect the water with integrity, in nonviolence and with compassion – truly a model for us all.”