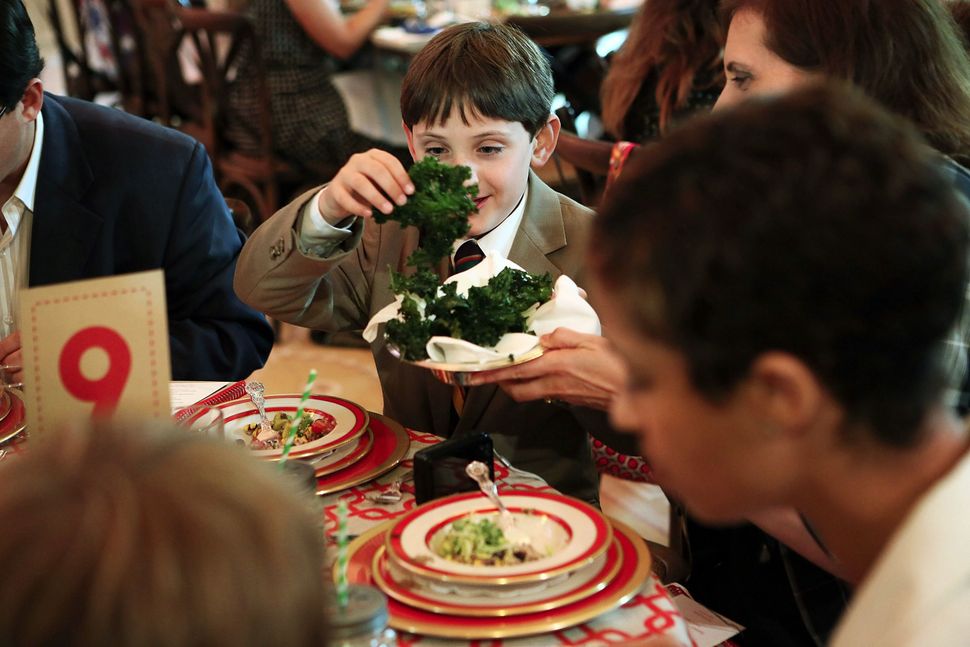 After synagogue on Friday, I went out to dinner. Over rigatoni with eggplant and kale salad, my mom and her friends talked about the nightmare of Donald Trump’s election. “This is horrific,” they said over and over, rehashing this hateful thing he’s said and that horrible thing he’s done and imagining just how awful it will be if Trump appoints this or that person to his cabinet. Then we went home, said goodnight, and went to sleep.

“I used to wonder what it must have felt like to be a grown-up living in Germany or in the United States during World War II,” the poet and activist June Jordan wrote. “I always wanted to imagine that only bad people didn’t know what was happening; only bad people could choose to ignore or else accommodate evil… But today was cloudy. And tonight it’s raining. At dinner, I had to accept or reject a small piece of lemon pie, and then I had to decide for or against a second slice. Mostly, this is the way I live: watching the weather, and making decision of extremely little consequence.”

I never wondered what it felt like to be a grown-up living in Germany or the United States during World War II. I was taught. In Hebrew school when I was in first grade, we were each assigned the identity of a Jewish European child growing up in 1940s Europe. For weeks, we researched our subjects, learning the schools they went to and the clothes they coveted, what their parents did for a living and whom they had crushes on. At the end of the project, the teacher revealed who lived and who died. Mostly, we died. The message was clear: this would have been you, could be you again.

In this telling, the Jews were full and human — their lives curbed by the blunt edge of violence wielded by monstrous Nazis. The Holocaust to me was unspeakable evil. It looked like the SS and the impossibly vast contours of a twelve-year-old Jewish girl’s imagination as she hid with her family in a tiny room behind a bookcase in Amsterdam. It looked like Christian Europeans sending their kids to Nazi youth groups. It looked like Jews lined up on the bank of the Danube and shot. Evil was ugly, and I was in danger.

A few months ago, I read an article in The Guardian about Brunhilde Pomsel, who had worked as a secretary to the notorious Nazi Joseph Goebbels. Kate Connolly writes: “While she admits she was at the heart of the Nazi propaganda machine with her tasks including massaging downwards statistics about fallen soldiers, as well as exaggerating the number of rapes of German women by the Red Army, she describes it, somewhat bizarrely, as ‘just another job.’” I believe Pomsel. I think so many of us are doing “just another job,” but Goebbels wouldn’t have been able to do his work without the work of his secretary. Who cooked for him? Who made his bed? Who did nothing? Who made him possible?

What if we thought not about whether or not we are “racist” — a word that conjures images of the Klan and blackface and people walking around proclaiming white sovereignty — but about the ways we participate in racism? Most Jews in America are white. This means we benefit from systems of white supremacy. This means it is our responsibility to dismantle them. This means that today in America, we are often not the primary target of violence. (That we are not the primary target does not mean the violence is lesser, but we may be less likely to see it.) This means many of us live in luxury. Amiri Baraka wrote, “Luxury, then, is a way of/ being ignorant, comfortably.”

I am mostly comfortable, and often I am ignorant. It’s easy. Today I went out to eat at a restaurant without knowing where the food came from and if the workers had been treated fairly. Today I walked past a woman asking for money because I was in a rush to meet a friend. Today I was tired so I did not write back to a student who is struggling with this rapid institutionalization of white hate and what it means for her as a young woman of color. Today I bought expensive shampoo even though that money could have gone instead to Planned Parenthood. Today I did not protest. Today I was mostly silent.

Maybe on Friday night after gathering with my people secure in the knowledge that we all mostly agree, this is what evil looks like: warm bread and family and laughter while other families in this same city wonder if they will be torn apart by deportation or shot by police. In Saudi Arabia, the family of Hussain Saeed Alnahdi — a University of Wisconsin-Stout student beaten to death by a white man — is in mourning. My brother reaches across the table to take some pasta off my plate. I swat his hand away and laugh. Sometimes, I think, violence looks banal, sometimes even beautiful.

Claire Schwartz is a PhD candidate in African American Studies, American Studies, and Women’s, Gender, & Sexuality Studies at Yale. Her poetry has appeared or is forthcoming in Apogee, Beloit Poetry Journal, The Massachusetts Review and Prairie Schooner, and her essays, reviews, and interviews in The Georgia Review, the Oxford American, the Virginia Quarterly Review and elsewhere.