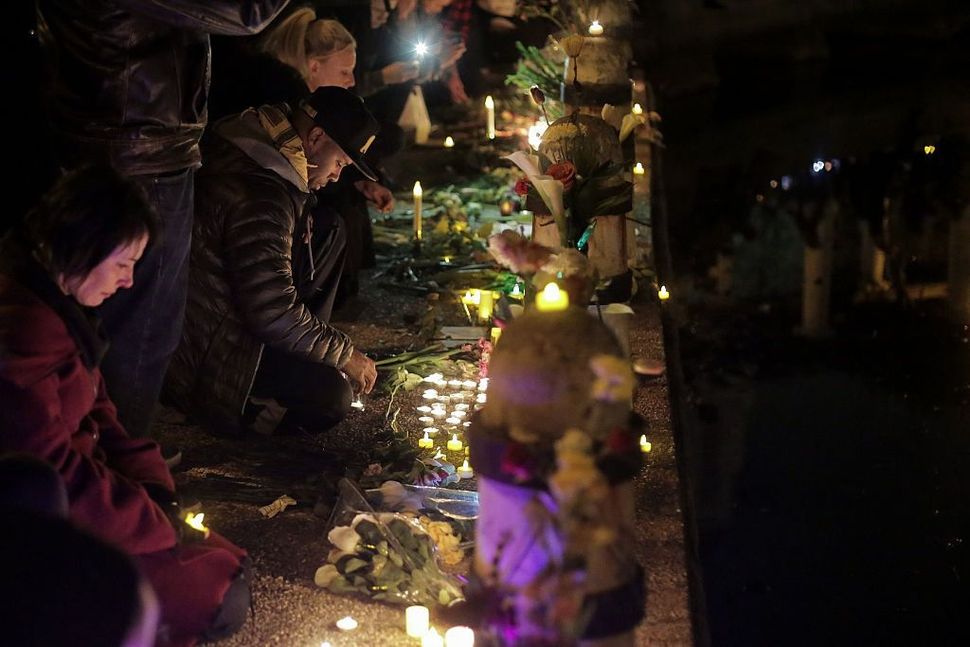 It’s been five days since a fire tore through an Oakland warehouse party, taking the lives of 36 people. One of those people was my friend, Jon Bernbaum, who was video dee-jaying that night.

This tragedy is horrifying. Not only because of the fire and the lives lost, but because a lot of those people were just like my friend Jon. They were people in need of a community, who had finally found one. My only solace right now, as I miss my friend, is knowing that if it really was his time to go, if there is some sort of fate or reason why things happen when they do (with which Jon would never have agreed), that there is nowhere Jon would have rather been, than surrounded by the self-labeled weirdos he called friends. I can only imagine the kick-ass visuals Jon must have had up on the walls that night. I hope that before it all ended the way it did, he was able to give the people at that party a little bit of joy through his art. Still, that joy can never compare to the joy he gave me through his friendship.

I talked to Jon two weeks ago. I’m going to be in San Jose in a few months, and we were making plans to see each other while I was in town. These visits were common for us. Jon and I went to college together at Brandeis University in Boston, and ever since then we’ve been long distance friends. I have lots of family in LA, where he used to live, and I’d see him whenever I was in town; he had lots of gigs in NY and would see me whenever he was here. In between visits, we’d keep in touch over social media and text, and most recently had a wonderful argument about the newest Star Wars film.

Anyone who knew Jon will know what I mean by “wonderful argument.” Jon loved to argue. He did it well. I first met him at Brandeis on the debate team, and since then have learned that Jon never stopped debating. He was passionate, smart, and if he thought he was right would try to convince you of that fact until you either gave up or gave in. I miss him. More than I thought I would. It was so common for us to not talk for long period of time that I didn’t think a few days without him would faze me, but it has. He was amazing and special and a dear friend. I’m sad to miss all the debates we’ll never have. I hate losing arguments, but I’d gladly lose many more to have him back again.

Jon was one of those people who took a long time to find who his people were. I watched him grow from reserved and at times abrasive in college, into someone who was warm and welcoming after it. He studied history and film at Brandeis, then went to USC film school for directing, did an internship at Pixar, and then turned down a full time job there because he decided that ultimately he wasn’t a director and didn’t want to be an editor (even though he was really amazing at it).

After a few years of sitting in the dark looking at film, something he relished when I knew him at Brandeis, he decided that what he really wanted was a job that let him be around people. He became a more active person, lost a ton of weight, and got into being a VJ, creating video content for concerts all over the world. He got to travel, he made amazing friends, and he became outgoing and open in ways he had never been before. He found his tribe, people that embraced the non-conforming, weird, and often misunderstood sides of themselves, and within that community found himself. He’d play shows in giant venues with thousands of people, small concerts, parties in the woods, and, yes, underground parties like the one he was at on the night of the fire.

I think what was amazing to me, as someone who knew him before he found this world, is how much he stopped performing personally when he started performing professionally. All of a sudden, it seemed like we had gotten to the real Jon, the one who wasn’t afraid of who he was and embraced it wholeheartedly. For those of you who knew Jon in college and not after…I wish you could have seen the man he grew into. He really was wonderful and if you ever got him talking about his art, his passion was contagious.

I miss you Jon. I love you. Rest in peace.