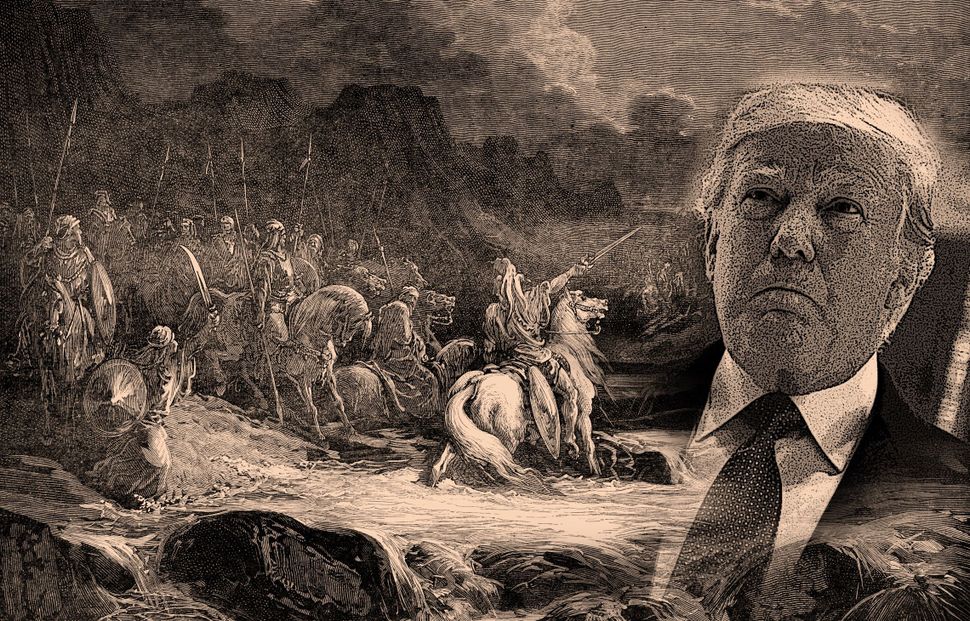 We Jews, as an outnumbered and persecuted people, have literally hallowed the principle of communal unity. We espouse it not only as a practical value, but also as a religious injunction.

The agents of destruction of the Second Temple were the Roman legions. Yet the Talmud tells us that the truer, underlying cause was Jewish disunity, the groundless hatred called sinat hinam. Such hatred, tractate Yoma 9b warns us, is considered comparable to “the three sins of idolatry, immorality, and bloodshed together.”

Personally, too, we are instructed against invidious behavior, in the form of lashon hara, malicious gossip. Talmudic sages write, “Talking about another person kills three people — the one who tells, the one who hears it, and the one who it is being told about.”

Yet Jewish experience and theology teach us that there is, indeed, a time and place and purpose for righteous civil war. The impending holiday of Hanukkah offers perhaps the clearest example.

For many American Jews, of course, Hanukkah has been doubly distorted: socially as a sort of Jewish Christmas, and religiously as a Jewish rebellion against the blasphemous orders of the Hellenistic Syrian king, Antiochus IV.

In reality, however, Hanukkah marks a Jewish civil war. Rabbi James Ponet has written that “the miracle-of-the-oil celebration of Hanukkah that the rabbis later invented covers up a blood-soaked struggle that pitted Jew against Jew.” Rabbi Irving Greenberg points out, in his book “The Jewish Way: Living the Holidays,” that “Hanukkah grows out of a split in the Jewish soul. In most of the battles in that extended war, Jews fought among themselves as soldiers in the armies on both sides.”

The catalyst for this civil war was a series of decrees by Antiochus against such Jewish practices as circumcision and in favor of the worship of Greek gods. The Maccabean rebellion began after the priest Mattathias refused a Hellenistic command to sacrifice a pig on the Judaic altar — as profound a desecration as can be imagined.

By one line of interpretation, then, Hanukkah celebrates the victory of religious nationalists over more assimilated Hellenistic Jews. In this particular moment of American political history, one might even say that the provincial populists triumphed over the urban elites.

But in the America of Donald Trump and his extremist Cabinet and his cadre of Jewish enablers, I would offer a different understanding. The victory commemorated at Hanukkah was an idealistic counter-revolution against an alien monarchy. Furthermore, it defeated a colonial government that had enlisted Jewish collaborators to denigrate and destroy the most meaningful elements of Jewish identity.

Our imminent sovereign launched his presidential race by propounding the racist fiction of birtherism, and he ended it with a television commercial trotting out the classic anti-Semitic canard that Jews stealthily control the world economy. In between, as we know, he maligned, among others, women, Muslims, military heroes, Mexicans and the disabled.

Even so, exit polls estimated that Trump won more than 20% of the Jewish vote — a lasting disgrace to our people. Now, those supporters and a significant number of middle-of-the-roaders are pleading with the rest of us to come together, to give the new president a chance, to be a unified Jewish community as part of a healing nation.

Hanukkah reminds us of a different answer. You can compromise with political difference, but you can never compromise with hate. You can either submit to it, accomplice yourself to it or fight against it. There are no other choices.

In this dire season, as I looked anew at the Hanukkah narrative, I also turned to those whom I think of as our modern-day prophets — Jewish writers. Their words put forth the same answer.

In Neil Simon’s play “Biloxi Blues,” his theatrical alter ego, Eugene Morris Jerome, is in boot camp during World War II. There is just one other Jew in his unit, a geeky and opinionated dogface named Arnold Epstein. For much of the play’s first act, Eugene stands idly by, enjoying his own tentative acceptance by the other soldiers, as Epstein is barraged with homophobic and anti-Semitic insults.

“Epstein sort of sometimes asked for it,” Eugene confesses to the audience, “but since the guys didn’t pick on me that much, I just figured I’d stay neutral, like Switzerland.”

The self-interested passivity ends when Epstein’s tormentors grab him and plunge him headfirst into a latrine. Having survived the humiliation, Epstein issues a life-changing admonition to Eugene:

“You have to get in the middle of it. You have to take sides. Make a contribution to the fight…. Any fight. One you believe in.”

The Russian Jewish writer and recent Forward 50 honoree Masha Gessen recently recalled the collaborators in her own lineage. In a penetrating essay for The New York Review of Books, she told of the great-grandfather who was part of the Judenrat in the Bialystok ghetto and the grandmother who served as a government censor in Stalin’s Soviet Union.

“We cannot know what political strategy, if any, can be effective in containing, rather than abetting, the threat that a Trump administration now poses to some of our most fundamental democratic principles,” Gessen concluded. “But we can know what is right. What separates Americans in 2016 from Europeans in the 1940s and 1950s is a little bit of historical time but a whole lot of historical knowledge. We know what my great-grandfather did not know: that the people who wanted to keep the people fed ended up compiling lists of their neighbors to be killed.”

Around the time of Thanksgiving, numerous pundits bemoaned the prospect of tense, politically divided family dinners. I welcome that vision. I pray that in Jewish households that include Trump voters and excusers, the Hanukkah candle lighting, the Purim partying and the Passover Seder will all be afflicted with deserved discord.

We are not living in a time of politics as usual. Donald Trump is not Ted Cruz, Marco Rubio or any other of this year’s Republican candidates, this year, with whom normal political debate would be acceptable. Trump is no George Wallace, who engaged in the most profound teshuvah, or atonement, for his racist demagoguery, humbly rolling his wheelchair into Martin Luther King Jr.’s former church in Montgomery, Alabama, begging for and receiving forgiveness.

No, my fellow Jews, social grace may be a desirable trait, but it is not an excuse for tolerating bigotry. Any version of Jewish peoplehood worth having must refuse to worship the swine of hatred on the altar of ethical values. Life cannot go on as if things are normal.

When we face the new regime as it is — an autocrat secretly assisted by Russian skullduggery and cyber bullying with an inner circle populated by a Putin appeaser, an anti-vaccine propagandist, a climate-change denier, an alt-right ideologue and an eager believer in conspiracy theories about Hillary Clinton sex rings and secret border messages of Muslim terrorists — then the miracle of the oil this Hanukkah should be our fierce persistence in fighting evil, the unextinguished flame of our yidishe neshama, our Jewish soul.

Samuel G. Freedman is a frequent contributor to the Forward. This essay is based on a d’var Torah he delivered at Beth Jacob Congregation, in Mendota Heights, Minnesota. Follow him on Twitter @SamuelGFreedman