Don’t Just Move One U.S. Embassy to Jerusalem — Move Two of Them 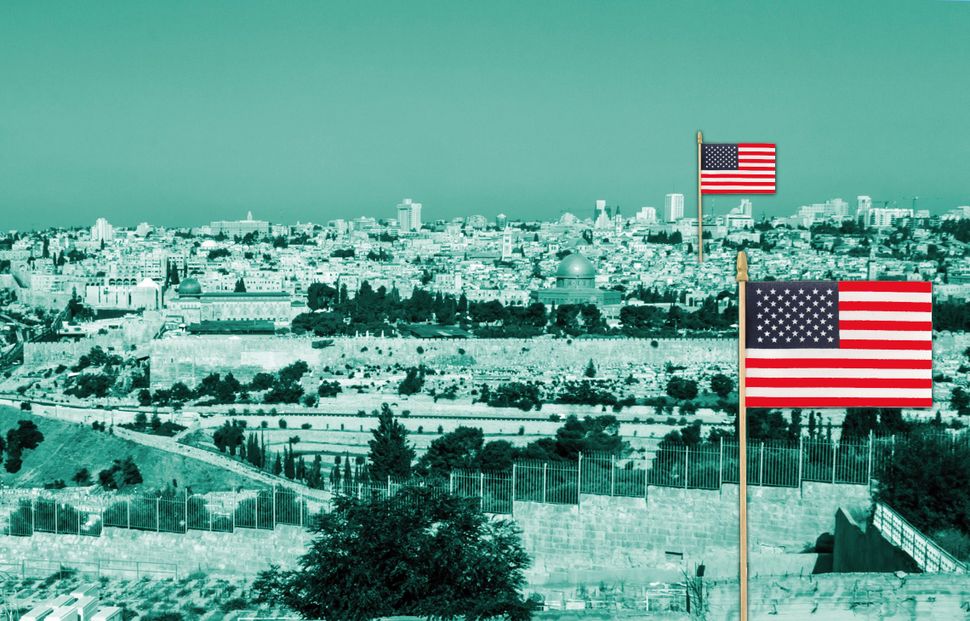 The seat of the Israeli government — its legislature, executive offices and courts — is comfortably nestled along the stone-lined streets and hillsides of West Jerusalem, but for more than a decade, no foreign embassy has been based there. Ever since Costa Rica left in August 2006, followed quickly by El Salvador, the world has considered Tel Aviv the capital of Israel, unless or until the permanent status of Jerusalem was decided.

Now President-elect Donald Trump is strongly hinting that he’s about to call the moving van.

During the campaign, Trump promised to move the United States embassy from its fortress-like building on HaYarkon Street in Tel Aviv to somewhere in West Jerusalem, but so do most candidates. Then they get into office and realize how ridiculously complex the issue is — how such a move would inflame the Arab world by implying that Jerusalem’s status was already settled when it is not; how difficult it would be to secure embassy personnel in a relatively small, contested city; how the new location would reward what many see as an Israeli occupation of Palestinian land soon to enter its 50th year.

Not Trump. Or at least, the people purporting to speak for him. Kellyanne Conway said on Monday that an embassy in Jerusalem is a “very big priority” for her boss. (And, she noted, the Christian evangelicals who supported him.)

Then Israeli Prime Minister Benjamin Netanyahu, who had been relatively restrained on the matter, declared on Tuesday that Trump’s plan was “great.” There even are reports in the Israeli press that his team is scouting sites.

So if Trump is hell-bent on doing this — and given his tendency to go back on his word as often as not, who knows? — here’s an idea: Move the U.S. embassy to West Jerusalem, and at the very same time, open another embassy in East Jerusalem, thereby recognizing a Palestinian state.

This provocative, risky and strangely attractive idea comes from Martin Indyk, vice president and director for foreign policy at the Brookings Institution and a veteran of various U.S. diplomatic initiatives. In a paper published earlier this month by Brookings, Indyk offers three options for the new Trump administration if it is, indeed, serious about achieving an end to the Israeli-Palestinian stalemate.

The dual embassy approach is the one that caught my attention — perhaps because I just returned from a week in Jerusalem, where the intractability of the conflict hung heavy in the early winter air. As Indyk notes, “neither side accepts the legitimacy of the other’s claims” and all the rational compromises developed over the years haven’t proven remotely acceptable to either party.

If Trump truly embraces unconventional thinking, how about this? By announcing that he’s moving the U.S. embassy to West Jerusalem, he will incur the wrath of Muslims everywhere, who will jump to the defense of Palestinians that they have, until now, largely ignored. By then deciding to open a U.S. embassy in East Jerusalem, Trump will set off howls among Jewish groups and their defenders in Congress, who will, understandably, see this as legitimizing Palestinian claims to the holy city.

Indyk acknowledges that this could ignite an explosion in an already dangerous neighborhood. But if Trump can show deft and strong diplomatic skills — and that is a gigantic “if” — he could use the threat of dual embassies to force the issue, bringing in regional leaders to compel Israelis and Palestinians, within a tight timetable, to figure out how to share their city. And if they can’t, he could persuade world powers to impose a deal.

In the end, Indyk posits, “Israel would be required to accept a Palestinian capital in Arab east Jerusalem in return for Arab, Muslim and international recognition of Israel’s capital in an undivided Jerusalem. The United States could then go ahead and locate two embassies in Jerusalem, one on the west side for Israel and the other on the east side for Palestine.”

Of course, there are a zillion reasons why a bold and subtle move like this wouldn’t work, and could in fact do more harm than good if it incited hard-core religious violence in the holy city.

But to paraphrase Trump’s line from the campaign: What does he have to lose? What do the Israelis and Palestinians have to lose?

With each passing year, as the number of Jewish settlers and settlements increase, as Palestinian leadership becomes more sclerotic and unresponsive, as public opinion on both sides of the Green Line hardens, belief in the possibility of a two-state solution is fading as quickly as the Jerusalem sunlight on a late-afternoon December day.

It may be that careful, incremental steps to build confidence and improve the lives of Palestinians are the only way to keep hope for a negotiated settlement alive. That’s what experts from all ends of the political spectrum advise.

Nonetheless, a striking, symmetrical action like this could jolt the peace process to life and help re-conceive Jerusalem as a shared city. I strongly doubt that Trump has the imagination, the political strength and the diplomatic wherewithal to see this through, but wouldn’t it be amazing if he tried?

Don’t Just Move One U.S. Embassy to Jerusalem — Move Two of Them