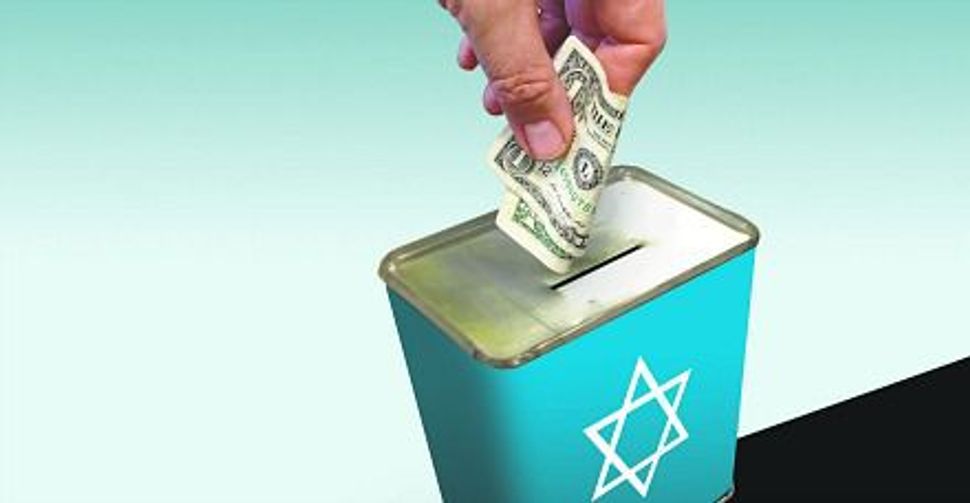 The corner bar on my street is taking a tithe. Its sidewalk chalkboard announces that 10% of all weekend income in December will be donated to the American Civil Liberties Union.

The bar is on to something. Amid all the uncertainty of this new political era, one thing is certain: Whatever our social values may be, our financial support is needed to realize them. Tzedakah is a financial variant of the Hebrew word for “justice,” and can be understood as “just-giving”: We should just give, and we should give justly. We may go to the polls once or twice a year, but we vote with our money choices every day — and those money votes add up to determine the state of our communities, our nation and our world.

This basic truth is not always apparent. Nine days before the recent elections, Jewish Funders Network president and CEO Andres Spokoiny posed a question: “How… can Jewish funders stem the tide of populist backlash, or, at least, protect ourselves somewhat from the new anger and distrust that has engulfed other elites?” Spokoiny offers various suggestions for salvaging public trust in philanthropy, such as “curated transparency” and respect for the same public from which donors seek trust. Notably absent from his suggestions is a less elitist consideration of what it means to be a Jewish funder.

The assumption that we must depend upon our wealthiest Jews for financial support is not limited to those most elite. “No amount of spare change is going to accomplish social change,” a Forward columnist declared in 2014. Yet, widening income inequality presents a paradoxical challenge to those who identify as middle income. According to a recent NPR analysis, “The middle class may be shrinking, but two-thirds of those who leave have moved up.” We need to adjust our Jewish funding assumptions accordingly.

Philanthropy is, literally, a “love of humanity,” a generosity expressed in financial terms. In Judaism, this generosity is codified in accessible percentages — not in elite big bucks. Over millennia, biblical rhythms of agricultural tithing evolved into rabbinic giving standards of 10%– 20%. Personal heshbon — accountability, both spiritual and financial — entered the Jewish language and value system. The Babylonian Talmud, (Baba Batra 9b) draws an analogy from prophetic imagery: “Just as each small metal-scale joins into a great armor-plate, so with tzedakah each and every coin joins into a great heshbon.” Every Jew who practices this principle is a Jewish funder, regardless of scope or beneficiary.

The medieval scholar Maimonides identified the highest level of tzedakah as an economic partnership with a struggling Jew. Long before public-sector reforms like Social Security were institutionalized in the United States, landsmanshaftn (benevolent societies organized by old-country ties) and other Jewish mutual aid groups of the peak immigration period were able to provide an impressive range of social insurance benefits to their low-income members, for the dues equivalent of $2 to $3 a week in today’s money. Y. Weintraub, a Workmen’s Circle advocate writing for the Forward in 1908, pointed out that there was “no class of takers who are not also givers” in these funding arrangements. Today’s Jewish social justice initiatives, often citing Maimonides, seek financial partnerships of solidarity beyond, as well as within, the Jewish community.

According to its mission, the Jewish Funders Network “works with Jewish funders, at the individual and collective levels, to improve the quality of their giving and maximize their impact as they make the change they want to see in the world.” I have been practicing the Jewish funding principles of just-giving for decades, but JFN is not open to me. While JFN’s website asserts, “If your Jewish identity informs your philanthropy… then JFN is your home,” individual membership is restricted to donors of $25,000 or more a year. Even though my yearly giving represents about 20% of my personal income — “a choice mitzvah,” in traditional rabbinic terms — on that basis I would need to earn at least $125,000 in order to be welcomed by JFN.

JFN’s limitations ultimately reflect the more general limitations of our current Jewish thinking about giving. In all fairness to the self-defined elites, our distorted financial perceptions cut across income levels. Most of us obsess over how much money other people have, and undervalue the impact our own money can generate. Many of “the 99%” who point their fingers at billionaires are themselves in or near the top 1% of global wealth — a surprisingly low bar for affluent Americans who don’t consider themselves affluent.

Meanwhile, philanthropic research consistently reveals that lower-income givers tend to be more generous, on a percentage basis, than their more affluent counterparts — even the Jewish ones. And the average American giving rate of 2% has not changed by more than a fraction of a percent over the past four decades, regardless of the state of the general economy.

Tzedakah has never been a spectator sport, and it has never been the exclusive province of elites. What would happen if more of us approached our personal Jewish funding decisions as part of an empowered grassroots mobilization of individual wallets — a real force for change?

As we make our year-end donations, let’s set our sights toward the coming year. Just-giving — simple, regular and fair — becomes possible when we commit to a regular percentage of income. That’s the only way to know how much we can really afford to contribute toward the causes most important to us, and the money we set aside really does add up. After that, setting distribution priorities becomes an ongoing process, one of committed action/reflection in the service of change. We can and will vote for different tzedakah “candidates” as time goes on, making thoughtful course adjustments as appropriate.

We have the opportunity to come together across generations, income levels, personal temperaments, spiritual orientations and, yes, even political ideologies, to support each other in realizing and channeling our full financial power. As we face the particular challenges of this new era, perhaps the time has finally come for a brit heshbon — an accessible covenant of accountability to guide all Jewish funding of the people, by the people, and for the people.

Rabbi Regina Sandler-Phillips is the editor of the recently published “Generous Justice: Jewish Wisdom for Just-Giving,” and the executive director of Ways of Peace Community Resources, in Brooklyn.