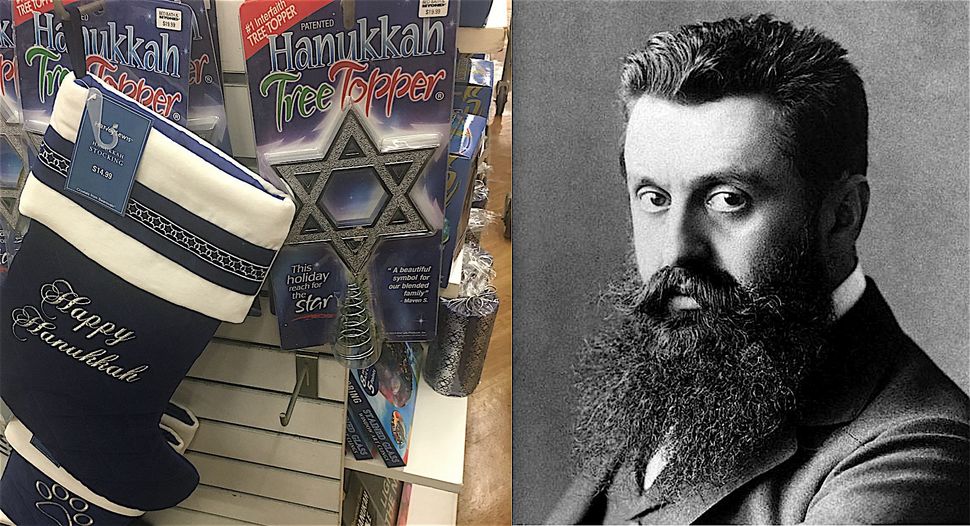 With his iconic black beard, stately tuxedo, imposing physique and stern visage, there was no mistaking him for anyone else, and I was delighted when he motioned me to come over and join him for a coffee and sachertorte. “Again they are sullying my reputation,” he protested. “One recollection scribbled more than a century ago and I’ve become every Jew’s excuse for forsaking our heritage.”

Herzl was referring to an entry in his diary dated December 24, 1895, which he complained to me was being carelessly bandied about, tarnishing his name in the process. “I was just lighting the Christmas tree for my children when [the Chief Rabbi of Vienna Moritz] Guedemann arrived. He seemed upset by the ‘Christian’ custom. Well, I will not let myself be pressured.”

With Chanukah and Christmas coinciding this year, more and more Jews are reported to be fulfilling what Natalie Portman recently avowed to be “every Jew’s kind of secret wish to have a Christmas tree.” And Herzl doesn’t want to be blamed for the phenomenon.

Clearly agitated, he pulled out some recent clippings from the press citing his account of that long-ago evening. “Look at what they’ve written,” he fumed. “They’re suggesting I’d give my blessing to the practice. One appeals to its readers not to feel pressured either, calling upon them to celebrate Chanukah, to celebrate Christmas, and to celebrate the unity of the human experience. And a recent piece in the Forward alleges that I’ve decreed the Christmas tree has nothing to do with Christianity. What they don’t know is that that was the last Christmas tree I ever had.” He opened his diary and pointed to a later observation he had recorded: “Anti-Semitism has grown and continues to grow — and so do I.”

“And this,” he said excitedly, “what about this!” He unfolded a yellowed manuscript of “The Menorah,” a short story he published back in 1897, just after convening the First Zionist Congress, and began reading: “Once there was a man who … had long ceased to trouble himself about his Jewish origins… when the age-old hatred re-asserted itself… Like many others, he believed this movement would soon subside. But instead of getting better, it got worse. Although he was not personally affected by them, each attack pained him anew. Gradually his soul became one bleeding wound…” He looked up. “It’s about me,” he confided. “Please, read for yourself.”

I picked up where he’d left off: “This had the effect of steering him to its source, namely, his Jewishness, with the result that he experienced a change he might never have undergone in better days…: He began to love his Judaism with a great fervor… so powerful that his vague feelings crystallized into a clear idea to which he gave voice: that there was only one way out of this Jewish suffering — namely, to return to Judaism.”

The Christmas tree, he told me, had been a vestige of his earlier belief that the Jewish problem could be solved if the Jews would only shed the trappings of their ancestral faith and embrace the ways of the worlds in which they lived. The menorah with which he replaced it was a symbol of his later conclusion, reached during the Dreyfus Affair, that we would forever be cried down as strangers in any country but our own, and his growing conviction that “the Jews who wish for a state of their own shall have it… The Maccabees will rise again.”

“What, then, do you make of this?” I asked, showing him a picture of Chanukah stockings and tree toppers in the shape of Jewish stars that I’d discovered in Bed, Bath and Beyond on a recent trip to the States, not to mention the Chanukah bushes and tree decorations on sale in Christmas markets everywhere. “Have the Jews finally found in America the home that eluded you in Vienna? Is the discomfort that European Jews are currently feeling anything more than that? Has the Jewish state you dreamed into being become an anachronism in our time?”

He furrowed his eyebrows and began stroking that thick black beard of his. “Think about it,” I said as I rose from my chair. “I’ve gotta go. Giving a talk on the relevance of the Zionist idea today, 120 years after you challenged us with your deductions. And I still have to figure out what I’m going to say. Maybe I’ll tell them about your Christmas tree and ask them to consider the deeper meanings of symbols.”

Dr. David Breakstone is the vice chairman of the World Zionist Organization and director of its Herzl Museum and Educational Center. He represents the worldwide Masorti/Conservative movement on the WZO and Jewish Agency executives. The views — and questions — expressed herein are his own.