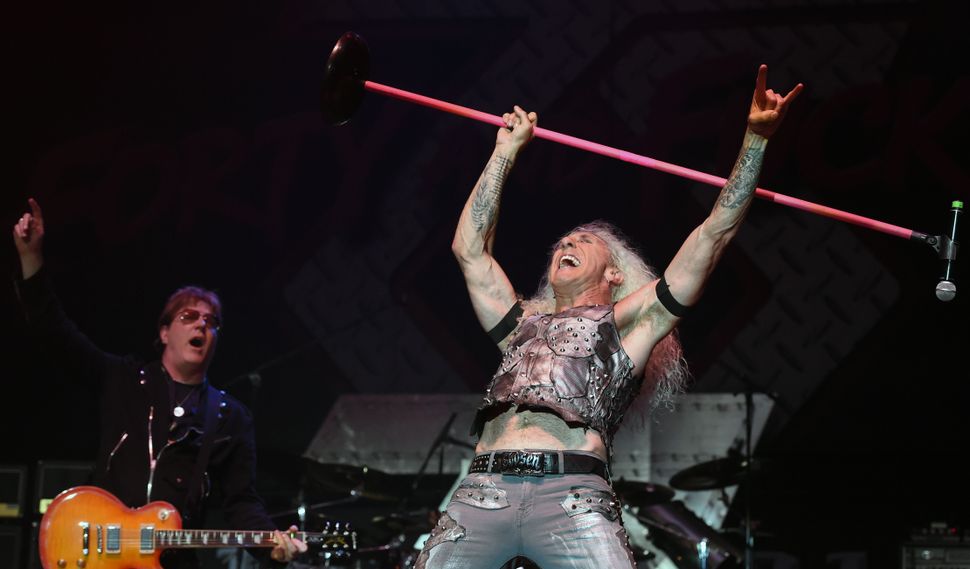 Media controversy makes for big headlines. The follow-up — not so much.

In the build-up to the inauguration with the difficulties of booking acts to play for Donald Trump, NPR host Kurt Andersen was discussing the president-elect’s musical taste. On the show, political analyst John Heilemann sang the chorus of “We’re Not Gonna Take It” before commenting, “That song could have been the theme song of the entire campaign. I’m surprised it wasn’t.”

Here’s why it wasn’t.

Several months ago my band, Twisted Sister, was thrust into the national debate because Trump was using our anthem “We’re Not Gonna Take It” at his campaign rallies.

This caused an uproar that gathered volume when Dee Snider, our singer, defended Trump’s use of the song. Dee noted that Trump, whatever you think of him, is an outlier who bucks the system. So, in his own particular way he represents rebellion — the hallmark of the message that Twisted Sister always tried to foster.

What Dee was doing was attempting to express his own opinion and walk a fine line between endorsing and repudiating Trump’s inflammatory rhetoric. But because it makes for big headlines, our stance was reported in the press as “Twisted Sister Supports Trump for President!”

Many of my friends who absolutely hated Trump wanted to know how I, as manager and owner of the Twisted Sister trademark, could let this happen.

I was accused, by those who hated Trump but didn’t know me personally, of being a media whore who obviously must have gotten paid “tons of money” to let this happen.

And then Trump stopped using the song.

Playing Your Song in the Stadium (A Sting in the Tail)

To start off, I need to explain the general rules of public performance rights of songs.

When you go to a ballpark and hear songs like “We Will Rock You,” “We Are the Champions,” “Sweet Caroline” or “We’re Not Gonna Take It,” you assume that the musicians are getting paid a lot of money.

The reality is, venues that pay public performance rights fees to ASCAP or BMI — from sports stadiums and outdoor arenas to restaurants, bars and gyms — can play any of 30 million licensed songs as much as they want, whenever they want, and the artist does not get paid. Not even one single cent.

So, when I get texts (which happens all the time) from friends at baseball games or at football, hockey or basketball games that say, “They just played your song at the game — ka-ching!!” I just respond, “Thanks!”

Well, someone must get paid, right?

Yes, The writer of the song (or the owner of the writer’s song rights — a music publisher, for example) does get paid. A whopping one-third of one cent. You read that right, $0.003.

Obviously money is not the issue. So how about politics?

Anyone, including politicians, who hold rallies at venues that pay BMI or ASCAP fees can request to have any of the millions of songs available played.

No permission has to be asked or, for that matter, given.

So where does that leave an artist who may not want a song played because that may imply (and this is the perception issue) that the use denotes support for the person at the heart of the rally?

Since most artists do not own the rights to their music, the only recourse left to an artist is “public shaming” of the politician or personality.

That means publishing a statement that repudiates the person using the song and, in so doing, creates enough bad press that he or she just stops using it.

It is a pretty effective PR device that always seems to work.

This device has been used, in record numbers this past election cycle, to prevent Trump from using many songs. Among others, Queen, the Rolling Stones, Adele, Aerosmith, Fleetwood Mac and Neil Young have made public statements repudiating Trump, and Trump has stopped using their songs.

Twisted Sister, however, was in a slightly different position.

Dee had appeared as a contestant on “Celebrity Apprentice,” and Trump helped him raise a lot of money for his charity, St. Jude’s Children’s Hospital.

Public shaming, in this case, was really not an option. And it put Dee in a tough position.

Over the past 20 years, “We’re Not Gonna Take It” has become one of the most licensed songs in the world for TV shows, commercials and movies. But because the band’s personal political leanings have always been all over the map, we have never allowed the song to be “officially” used by any political group, left or right.

So though it has been sung at mass events in over 30 countries, the band could not allow the song to be associated with Trump’s campaign.

Therefore, with the band’s full support, Dee asked, in a private conversation, that the song be withdrawn from the Trump playlist.

It didn’t need the press. It didn’t need public shaming. But our song stopped getting played and didn’t become the anthem of the Trump campaign.

We chose just the way it needed to be.

Jay Jay French is a founding member of Twisted Sister as well as the band’s manager, producer and guitarist. He writes regularly for inc.com.