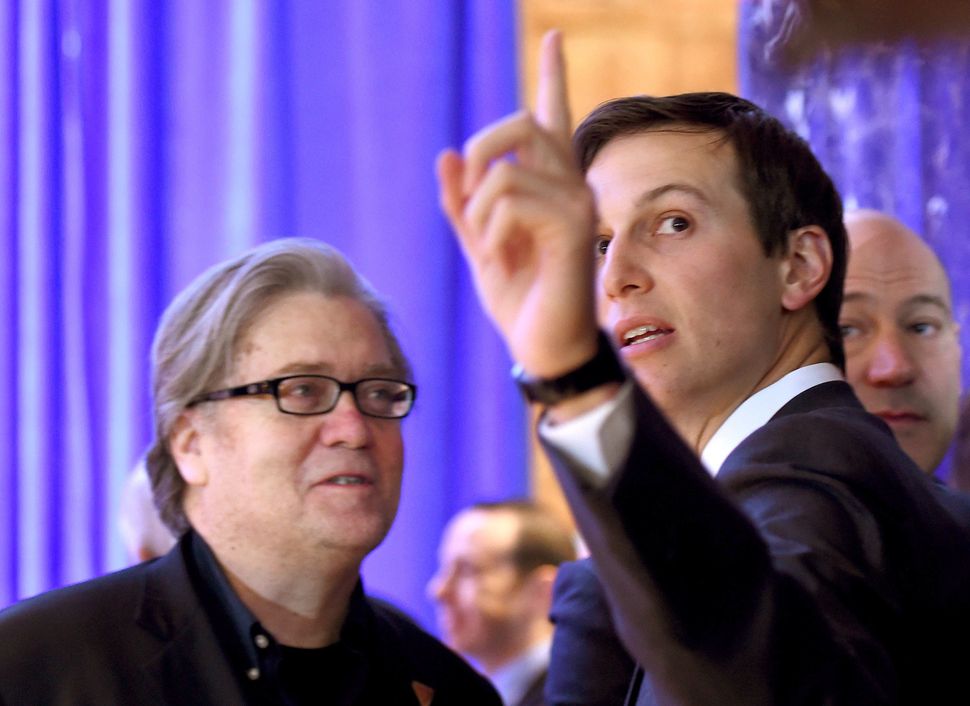 Commentators and political enemies jumped up crying nepotism the moment on January 9 that the President-elect announced his appointment of his son-in-law, Jared Kushner, as Senior Adviser to the President in the White House Office.

Members of Congress and Mr. Kushner’s own lawyer immediately floated competing interpretations of the federal anti-nepotism law, which purports to forbid the President from “appoint[ing]” any “relative”—including, specifically, a son-in-law—to a position in an “Executive agency” controlled by the President.

Does the statute “bar Mr. Kushner’s appointment as a White House staff member,” as members of the House Judiciary Committee asserted in a letter to Mr. Trump? Or does the statute, read properly, not apply to positions in the White House Office, as Mr. Kushner’s lawyer argued, because an Executive “office” is not an “agency”? And does Kushner’s decision not to take a salary effectively insulate him from the law, because the only consequence imposed for a violation of the statute is that “money may not be paid from the Treasury” to the relative?

These disputes about the interpretation of the anti-nepotism statute are important, but they are like the squabbles of gnats on the back of an elephant. Take a step back and you see that they matter little in the broader landscape, because any statute that is interpreted to forbid a President from appointing whoever he wants to an internal adviser position in the White House is unconstitutional. And, for reasons also rooted in the Constitution, it is extremely unlikely that any legal challenge to Jared Kushner’s appointment will ever be heard on the merits.

Congress can no more forbid nepotism in presidential appointments than it could set a minimum IQ for them.

Despite the once-every-four-years paean to mom-and-pop shops and other family businesses that is the presidential election, nepotism is generally frowned on in American culture. It is, after all, contrary to our meritocratic ethos. Most of us believe that jobs and job promotion should go to the most qualified person, not the closest relative of the boss. In preventing public officials in the executive, legislative, and judicial branches from doling out plum government jobs to relatives, the anti-nepotism statute enshrines these values as a matter of federal law.

However, it is simply inapplicable when we are talking about the President. By design, the President must have the freedom to use whatever measures he sees fit in making any and all nominations and appointments — be they experience, temperament, political affiliation, loyalty (even slavish devotion), intelligence or facility with brass-knuckled tactics.

As Alexander Hamilton explained in Federalist No. 76, “In the act of nomination, [the president’s] judgment alone would be exercised; and as it would be his sole duty to point out the man who with the approbation of the Senate should fill an office.” Only after the President exercises the power to nominate does the Senate “ratify or reject the choice of the President” for certain positions, while the Senate plays no role whatsoever in the appointment of others.

The Constitution itself suggests this result. The only limit the Constitution places on appointments is the “Incompatibility Clause” of Article I, Sec. 6, which forbids the appointment of a sitting Senator or Representative to a civil office within the federal government. Implicitly, no other limitation on the President’s unfettered discretion to appoint whosoever he wishes is permitted.

The anti-nepotism statute runs headlong into the President’s appointments power because it is an effort by Congress to impose its own values on the selection process, and in that way limit the people who the President can “appoint.” Congress can no more forbid nepotism in presidential appointments than it could set a minimum IQ, publish a list of low-quality schools from which nominees cannot have graduated, or require an appointee to hold graduate degree. Each would, in some sense, be a rational expression of our nation’s merit-based, aspirational character. But each would be unconstitutional. It is for the president to decide which qualities, characteristics, and attributes recommend an officer, and which invalidate her.

There is, of course, an overriding constraint on every president in this arena: Presidents are politically accountable for their appointments, and suffer political consequences if they choose un-wisely. As the Supreme Court explained in Freytag v. Commissioner (1991), the Framers deliberately placed the appointments power in the President’s hands alone in order to “ensure that those who wielded it were accountable to political force and the will of the people.” There may be no objective gauge for balancing competing qualities in a nominee, but the American people are expected to weigh in with their own subjective judgment at the next election.

That brings us to the second constitutional hurdle to any attempt to use the anti-nepotism law to block Jared Kushner’s appointment: that the position of Senior Adviser to the President is entirely internal to the White House. The appointee will have virtually no power other than to render advice to the President. Such appointees serve at the pleasure of the President; he hires and fires them at will, and Congress cannot properly insert itself in those decisions, whether before or after appointment.

This highlights an important difference between Mr. Trump’s appointment of Mr. Kushner and previous presidential appointments of close relatives. JFK nominated his brother, Bobby, as Attorney General — and the Senate had a role to play, confirming the nominee. Bill Clinton appointed his wife, Hillary, to lead his healthcare reform effort — and the courts played a part, because her appointment was challenged by industry groups who were to be affected by the Health Care Reform Task Force she chaired.

A White House adviser position is different. Mr. Kushner will be serving in a role that has power only insofar as he has the ear of the President. No individual will be able to claim injury caused by Mr. Kushner’s appointment that is not the result of an intervening decision of the President to adopt his advice. As a result, under Article III’s irreducible constitutional minimum for standing, no plaintiff will be able to maintain a suit challenging the legality of Mr. Kushner’s appointment under the anti-nepotism statute.

Still, one could say: When nepotism merges with governance, it is not only our meritocratic ethos that takes a hit; the floodgates to actual corruption are opened. There is something that stinks about members of Congress putting their spouses on the House payroll, for example—one of the reported impetuses for the anti-nepotism statute. Can Congress really not prevent the president from doing the same thing—effectively funneling taxpayer dollars into the pockets of a president’s close relatives?

In the case of Kushner, that he will not take a salary inoculates him from the anti-corruption rationale. But on the level of values and ideals, it is a fair point; one could easily imagine a democracy slightly different than ours in which a President were not permitted to appoint his close relatives to government positions.

But that is not our system. Here, the People serve as the sole check on the Executive in this sphere, as the Framers intended. The president chooses advisers wisely or foolishly — whether relatives or not, paid or not, objectively qualified or not — and reaps acclaim or scorn commensurate with that choice. Congress cannot save a president from errors of judgment in appointing officers and advisers, any more than it can take credit for risks that succeed brilliantly. Whether Trump’s appointment of Kushner falls into the former or latter category, only time — and the American people — will tell.

Akiva Shapiro is a constitutional and commercial litigator at Gibson Dunn in New York. He was counsel for amici curiae Members of Congress at the U.S. Supreme Court in Zivotofsky v. Clinton (2012) and Zivotofsky v. Kerry (2015).