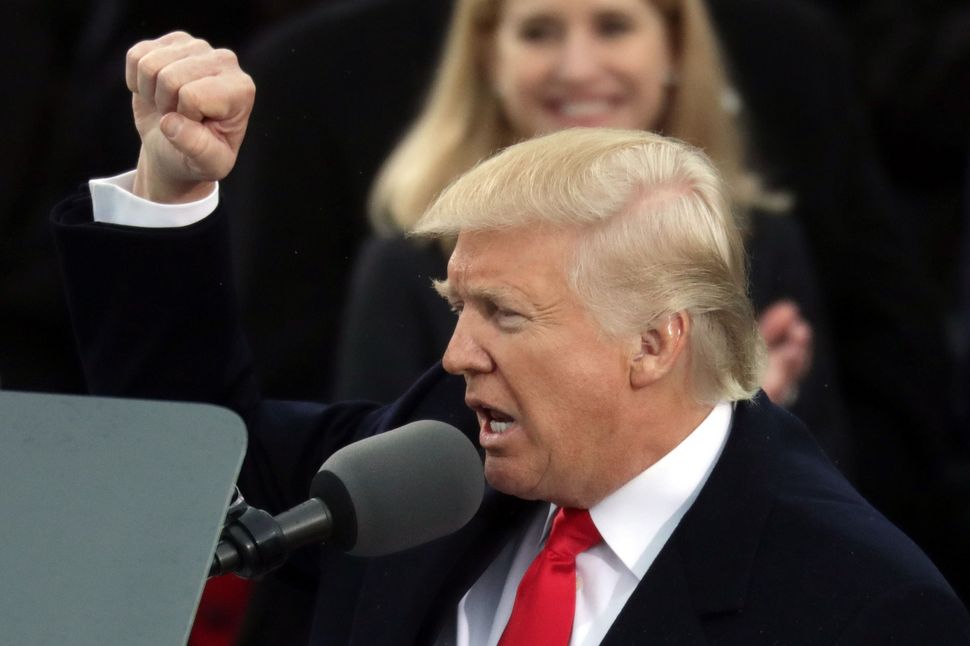 Our new president, Donald Trump, used his inaugural address to enunciate his particular view of American patriotism — dark, assertive, exclusionary, exceptional, supremely populist. “And this, the United States of America, is your country,” he said, pointing his finger at the throngs assembled on the mall in Washington but clearly speaking to the Americans who elected him.

In this patriotic vision, Americans are safe and wealthy and strong and nice to each other because America fiercely protects its borders and serves its own people before welcoming in or caring about anyone else. “From this day forward, a new vision will govern our land,” he promised. “From this moment on, it’s going to be America First. America First!”

To those who are struggling in an unforgiving economy, who have been left behind by lousy schools and rapacious corporations, who haven’t benefited from surging employment or appreciate safer cities, that patriotic promise surely must resonate. It acknowledges their resentments and insecurities and confusion by wrapping the solution in an ever-tightening red-white-and-blue flag.

But it’s a patriotism devoid of a key element: sacrifice.

Judaism is all about sacrifice — not burning animals anymore, thankfully, but about the ways in which we sacrifice our individual needs and desires on behalf of the larger community. The Talmud contains one discussion after another about how a powerless people sought to balance the rights of individuals with the exigencies of the whole — be it a family, a synagogue, a village, a country. We live life in the plural.

Other presidents facing challenges even more momentous than Trump’s have famously called upon Americans to recognize that with rights come responsibilities, that our patriotism compels us to do a little less for ourselves and a little more for others. In 1865, Abraham Lincoln pleaded with a nation divided by years of bloodshed to forgo vengeance and retribution and instead show “malice toward none [and] charity for all.”

John F. Kennedy directed us to ask what we could do for our country. Even Ronald Reagan, hero to the Republicans that now stand in a circle of power behind Trump, used his first inaugural address to extol the selflessness of an American soldier who died on the battlefield of World War I, sacrificing on behalf of the common good.

It took Senate Minority Leader Chuck Schumer — the only Jewish political leader to speak from the podium — to invoke another battlefield hero, Sullivan Ballou, who died in the early days of the Civil War, and whose love of his country even overpowered his love for his wife.

From our new president, not a word.

Instead, his patriotism is reduced to simplistic notions and throwaway rhymes — “buy American and hire Americans” — that as a businessman he did not follow and that implies the world is a zero sum game, with winners who beat losers and nothing in between.

But a broad-minded, robust, sustainable patriotism instead sees the world propelled by a figurative scale of justice, a cosmic balancing act, where American interests can serve other causes — economic, geopolitical, human rights — at the same time.

The president uttered just one grace note: “At the bedrock of our politics will be a total allegiance to the United States of America, and through our loyalty to our country, we will rediscover our loyalty to each other. When you open your heart to patriotism, there is no room for prejudice.”

Loyalty there could imply sacrifice. Or it could imply blind allegiance that makes little or no room for difference of opinion and outlook. Trump didn’t say what he meant.

Given the auspicious context of his speech — the peaceful transfer of power — it is tempting to give the president the benefit of the doubt. But throughout Trump’s long, contentious, unprecedented campaign, I don’t recall him ever speaking about what we must do for each other to confront the nation’s challenges. Empathy is not part of his vocabulary, nor, seemingly, part of his character. His campaign rhetoric was laced with a first-person, singular vernacular that boasted of what he will do for his supporters, often at the expense of others.

The inaugural address was framed in the “we” rather than the “I” — thank goodness for that. Still, it expressed a combative, exclusive notion of patriotism that may be appropriate for a campaign or a battlefield but not a presidential inauguration — and certainly not a successful administration.

Now and for the next four years, we have to figure out how to reclaim the mantle of patriotism from a man who doesn’t understand what it truly entails.