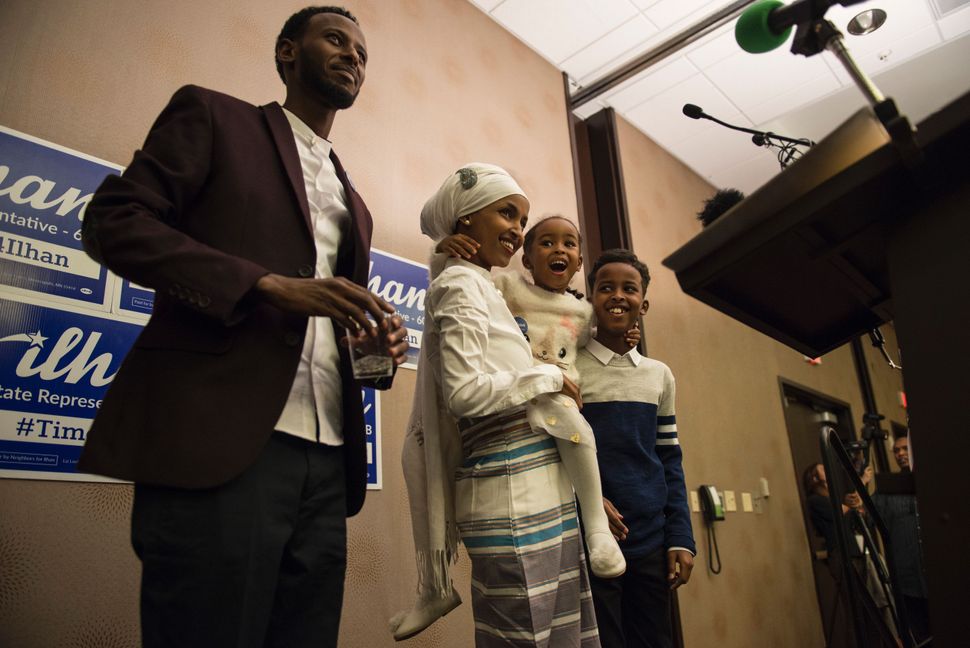 Ilhan Omar, candidate for State Representative in Minnesota, stands with her family during her victory party on election night, November 8, 2016 in Minneapolis, Minnesota. Image by Getty Images

On the last Sunday before the presidential election, Donald Trump swooped into the Minneapolis airport for a typically inflammatory rally. At a transit hub with hundreds of Somali employees, in a city with about 25,000 Somali residents, the Republican candidate fed his audience fear, rage and resentment. “Everybody’s reading about the disaster taking place in Minnesota,” he declared. Then he added ominously: “You don’t even know who is coming in. You have no idea. You’ll find out. You’ll find out.”

I happened to be living in Minneapolis last fall while on a research sabbatical from Columbia University, and I ascribed Trump’s words to nothing more than his bullying, bigoted nature. Minnesota was a blue state, after all, and Hillary Clinton was safely ahead. And in a few days, Trump, I assumed, would be defeated and discredited.

Like the rest of the chattering classes, I was completely wrong, and in Trump’s first full week as president he made clear that he meant every racist, nativist, and Islamophobic thing he said about immigrants and refugees during the campaign. Anyone who is expecting the gleefully compliant Republicans in Congress to moderate our homegrown fascist-in-chief is delusional.

The Jewish experience gives us plenty of reasons to oppose Trump’s wall on the Southern border and his recently announced executive order, a de facto ban on Muslim immigrants and refugees. The American racists of an earlier era essentially barred Jewish and Catholic immigrants under the restrictive Immigration Act of 1924 by disfavoring their nations of origin in the quota system. Trump is doing the same by quarantining Muslim-majority countries, including Somalia.

And the specter of the United States shutting its golden door to refugees from Syria’s civil war, with its massive scale of atrocities, cannot help but remind us Jews of America’s failure to accept more than a token number of Jews fleeing Hitler.

For the moment, though, I will leave it to others to push those arguments. What’s on my mind is a more personal sense of anger and disgust, very much rooted in my recent five months of living among the Somalis. If you know of Minnesota’s Somali community only at a distance, only through the media filter, then you probably know only one thing about it: the scattered examples of radicalization.

Indeed, several dozen young men have either joined the Shabab or the Islamic State group, or have been apprehended trying. In the incident Trump flourished in his airport diatribe, a Somali man shouting “Allahu Akbar,” “Allah is greater,” stabbed 10 people at a shopping mall in St. Cloud, a small city near Minneapolis, late last summer.

To live in Minneapolis, however, is to see a counter-narrative that is far larger and yet far less recognized than the sporadic outbursts of jihadism. I could not walk 50 feet through the campuses of the University of Minnesota or Augsburg College without passing young Somali women in hijabs on their way to class. I could not take an Uber without winding up in conversation with a Somali driver who invariably had a degree from overseas in engineering or accounting or education.

If you wanted to create a self-fulfilling prophecy, if you wanted to alienate those who wish to belong, then you would do exactly what Donald Trump and his complicit party are doing.

A Somali woman, Ilan Omar, seen in the photo above, was elected to the Minnesota Legislature on the same day Trump won the White House. There has already been a Somali member of the Minneapolis City Council. As of a 2006 survey, Somali entrepreneurs in Minnesota operated 600 businesses with $164 million in annual sales, and that number has surely soared in the 11 years since. Somali women own and run the vast majority of shops in a popular mall on Lake Street – a detail that defies the conventional wisdom that Islam keeps its women subservient. And in the several interfaith gatherings I attended last fall, Somali Muslims were active and vocal participants.

To hear Trump tell it, all these decent, responsible, upwardly mobile new Americans slithered through the sieve and are just waiting to attack his good white people. Far from it: Lutheran and Catholic Church groups have helped resettle many of the Somalis, just as they did in earlier decades for Hmong and Vietnamese refugees. These role of these churches is one of the most luminous expressions of Minnesota’s progressive, compassionate tradition – a tradition embodied by elected officials from Hubert Humphrey to Paul Wellstone to Keith Ellison.

While I cannot claim to have made a formal academic or journalistic study of the Somali experience in Minneapolis, I have no doubt that this experience overwhelmingly fits into the classic American saga of arrival, struggle, sacrifice, inclusion. Assimilation is happening before our collective eyes. It ought to look very familiar to any Jew whose forebears came here fleeing the czar or the Fuhrer.

Samuel G. Freedman, the author of eight books, is a regular contributor to the Forward and a professor at Columbia University.