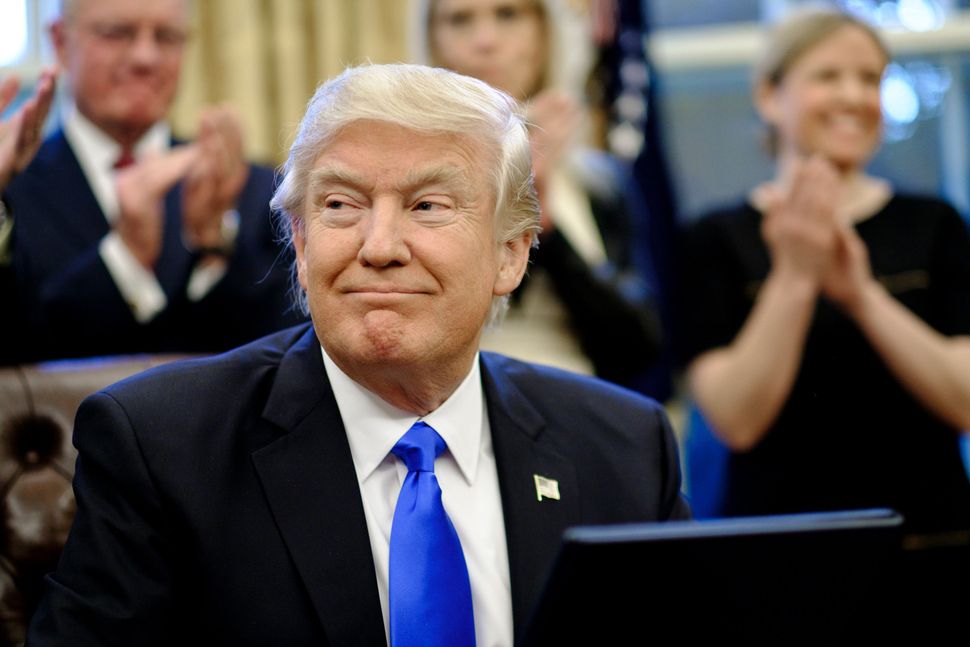 Supporters of Donald Trump have often defended his campaign against charges of anti-Semitism by noting he has an Orthodox Jewish daughter, son-in-law and grandchildren. Jews on the right are excited about Kushner’s role as a special adviser to the president, assuming he’ll be their advocate on Israel and other Jewish issues. Jews on the left hope that Kushner, whose parents were long-time donors to the Democratic Party, will be a check on Trump’s most conservative impulses.

But although most reports put Kushner at the center of White House decision-making, he mostly remains a cipher, not only on Jewish issues but on the White House’s entire agenda. Nowhere was that more apparent than in the controversy kicked up by a White House statement on International Holocaust Remembrance Day that made no mention of the Jews who were killed by the Nazis and in whose memory the day was created. Where was Jared when the statement was written and released?

On a day in which Trump also began closing America’s doors to refugees from various Muslim countries, this debate might seem like the most parochial example of Jewish infighting and special pleading. But the question of the “universality” of the Holocaust has haunted Jewish activism and scholarship for 70 years, and preserving the uniqueness of the genocide of Europe’s Jews has been a central tenet of Jewish advocacy and historicity.

On its face, the Trump statement is an emotional appeal to tolerance drawing on the lessons of the Holocaust. “It is with a heavy heart and somber mind that we remember and honor the victims, survivors, heroes of the Holocaust,” it begins. “It is impossible to fully fathom the depravity and horror inflicted on innocent people by Nazi terror.”

But the omission of a specific mention of the Jews sets off alarm bells for those who understand the ways Holocaust deniers and European nationalists have sought to downplay the murder of the Jews and instead shift focus to the suffering of non-Jewish Poles, Lithuanians, Germans, French and others during World War II. That was the larger battle being fought in the 1980s when Jewish groups opposed the construction of a Catholic chapel in the shadow of Auschwitz. As the late Edgar Bronfman, then president of the World Jewish Congress, said at the time,  “it is not only a matter of the Auschwitz convent, but the broader implications of historical revisionism in which the uniqueness of the Holocaust and the murder of the Jewish people is being suppressed.”

With the rise of nationalism in Europe and the fading of the survivor generation, the battle against such suppression has only intensified.

And yet, at least in the 48 hours since the release of the White House statement, only two groups have been heard objecting, the Anti-Defamation League — whose CEO called the omission of Jews “puzzling and troubling” — and the newly assertive Anne Frank Center for Mutual Respect, whose executive director demanded, “How can you forget, Mr. President, that six million Jews were murdered because they were Jews?” Perhaps other groups couldn’t get statements out in time for Shabbat, but the silence was conspicuous.

Meanwhile, Ronald Lauder, Bronfman’s successor as president of the World Jewish Congress, felt compelled to criticize the ADL and defend Trump. “It does no honor to the millions of Jews murdered in the Holocaust to play politics with their memory,” Lauder said, in a statement issued Saturday. “Any fair reading of the White House statement today on the International Holocaust Memorial Day [sic] will see it appropriately commemorates the suffering and the heroism that mark that dark chapter in modern history.”

The phrase “the suffering and the heroism” is oddly non-specific in a statement from the leader of a group that fights for the rights of Jewish Holocaust victims. Jewish leaders and historians never doubt the suffering and heroism of non-Jews during World War II. But most have insisted that only the Jews were singled out for complete annihilation as a race by the Nazis. That the Nazis uniquely put the genocide of the Jewish people as a central goal of the thousand-year Reich, no less than conquering Europe and eventually the rest of the world. “After the Holocaust took away so much from the Jews, we must not take the Holocaust itself away from the Jews,” Ron Dermer, Israel’s ambassador to the U.S., said in remarks Friday marking International Holocaust Remembrance Day at the U.S. Holocaust Memorial Museum in Washington.

There is no indication that Dermer was addressing the White House statement. His speech is an admonition against “universalizing” the Holocaust, directed not at the revisionists and European nationalists but at well-intentioned  people for whom “the Holocaust is primarily a universal story about man’s inhumanity to man, about the evils of racism and xenophobia, about how even the most enlightened societies can descend into darkness and barbarism.”

Dermer invokes the late Elie Wiesel repeatedly in his talk, and the revered Auschwitz survivor was a fierce defender of the “uniqueness” argument. “Not all victims were Jews, but all Jews were victims,” he famously wrote. International Holocaust Remembrance Day was established by the United Nations and is marked on the day Auschwitz was liberated in large part to counter the “de-Judaization” of the Shoah.

You wouldn’t know that from the White House statement. White House spokeswoman Hope Hicks doubled down on the statement in light of the criticism, telling CNN’s Jake Tapper, “Despite what the media reports, we are an incredibly inclusive group and we took into account all of those who suffered.” She also shared a Huffington Post UK article describing the “gay people, priests, gypsies, people with mental or physical disabilities, communists, trade unionists, Jehovah’s Witnesses, anarchists, Poles and other Slavic peoples” who were “targeted” by the Nazis.

The Jews’ insistence on the uniquely Jewish aspect of the Holocaust has often been turned against them, with accusations that it is meant to deny the suffering of others or to somehow shield Israel from criticism. These have been recurring themes both on the far right and the far left. Indeed, by insisting on the universality of the Holocaust, the Trump statement invited bipartisan condemnation. Writing for Commentary, former Reagan speechwriter John Podhoretz said the omission of the Jews is “the culmination of decades of ill feeling that seems to center on the idea that the Jews have somehow made unfair ‘use’ of the Holocaust and it should not ‘belong’ to them.” Josh Marshall, editor and publisher of the liberal website TalkingPointsMemo.com, noted that “it has long been a trope of Holocaust deniers and white nationalists to insist that Jews were only incidentally targeted.”

In a different context, Lawrence Summers, when he was president of Harvard University, distinguished between the anti-Semitism of “intent” and the anti-Semitism of “effect.” Even if the White House Holocaust statement wasn’t intended to dis the Jews or comfort their enemies, that doesn’t gainsay its effect. Anti-Semitism clung to the edges of the Trump movement — officially disavowed by Trump and belied by his ardently pro-Israel stance but subtly stoked by some of his associates, speeches and actions. Perhaps Jewish critics were being overly sensitive, or driven by partisan politics, when they wondered if this wasn’t another dog whistle. Or perhaps Trump wasn’t aware, as in many things, of the impact of some of his words and actions, and wasn’t hearing from or listening to the kinds of people who could steer him away from messages that had the effect of anti-Semitism.

Which is where Kushner comes in. He, the grandson of Holocaust survivors who dedicated their lives to its memory, must certainly understand the stakes in how to discuss the Shoah. One of his rare public statements of the campaign was a full-throated defense of Trump against charges of anti-Semitism in which he invoked his grandparents’ experience during the war. He described in detail his grandmother’s persecution in the Novogroduk ghetto, the murders of her brother and sister, and how she escaped to join the Bielski resistance fighters, where she met his grandfather. “I go into these details, which I have never discussed, because it’s important to me that people understand where I’m coming from when I report that I know the difference between actual, dangerous intolerance versus these labels that get tossed around in an effort to score political points,” Kushner wrote.

We are a little over a week into the Trump administration. There’s a learning curve, steeper than most for a candidate with no political experience. But he has a close adviser and trusted relative who can help him navigate the often contentious world of Jewish policy and politics. What we don’t know yet is if Jared Kushner is willing to play that role, and whether the president is willing to listen.

As John Podhoretz wrote in his harsh condemnation of the Trump statement: