Will The Real David Friedman Please Stand Up? 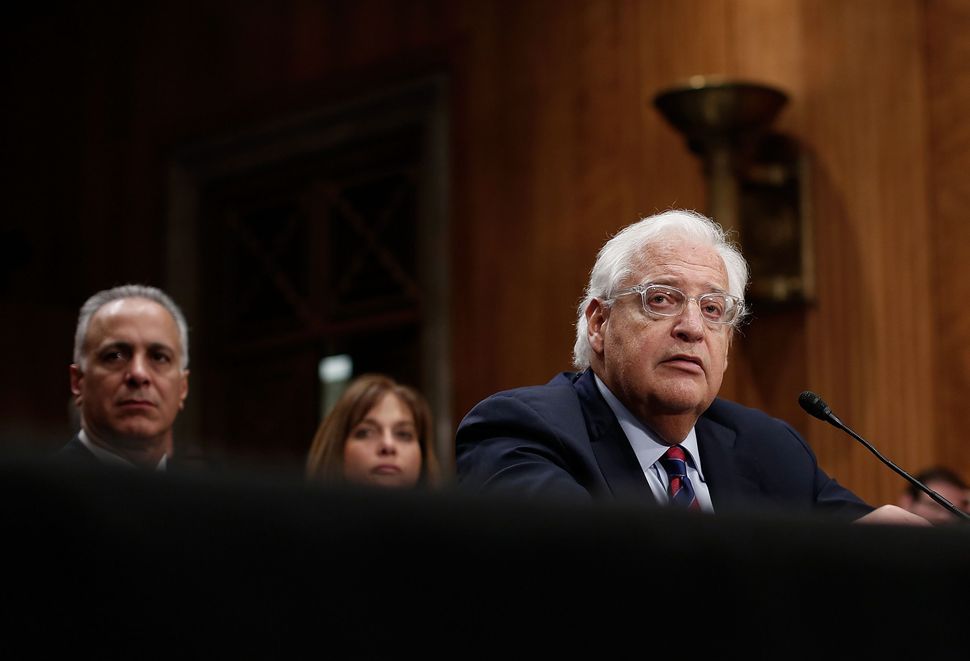 In pre-Trump Washington, a man like David Friedman would never have come before the Senate Foreign Relations Committee as a nominee to be ambassador to Israel. Not after he insulted, in writing, a sitting U.S. president; many members of the Senate, including the Democratic Minority leader; top officials of Jewish organizations, and the entire State Department.

Not when five former ambassadors, Democrat and Republican, said he was unqualified. Not when he has no diplomatic experience whatsoever. Not when his views are way to the right of even those of the right-wing Israeli government.

But we are not living in normal times, and so there Friedman was yesterday, facing a semicircle of senators, looking like your uncle in Florida and sounding like a mild-mannered librarian. I listened to most of the hearing and concluded that either 1) the guy is an incredible actor; 2) he has a dual personality, or 3) he truly is contrite and able to change his temperament and his policies thoroughly enough to credibly represent the United States in Israel.

So I’m going to give him the benefit of the doubt — not to be kind, but to be practical. After his performance, Friedman is probably going to be confirmed, anyway. He came off as apologetic and calm, and didn’t say anything inflammatory or ridiculous. (That’s how low the bar is these days.)

But if he does, indeed, win Senate confirmation, he has a gigantic task ahead of him, and that is to decide which David Friedman he will be — the flamethrower or the diplomat? The sneering critic or the humble public servant? Someone who says one thing to Congress and an entirely different thing elsewhere, or a person who consistently honors the words he uttered under oath?

Because even the sympathetic chair of the committee, Republican Sen. Bob Corker, acknowledged that, at the hearing, Friedman had to “recant every single strongly held belief you have,” a situation that Corker characterized as “fairly extraordinary.” Sen. Bob Menendez, the New Jersey Democrat, called it “nomination conversion.”

How will we know which David Friedman will be ambassador? By what he says and what he does.

We will know if his repeated expressions of regret over his shameful words — written and published, mind you, not spoken in a fit of passion — are real and lasting. If, as the other senator from New Jersey, Cory Booker, asked, whether he truly understands the difference between apology and atonement.

We will know if Friedman follows through on his promise to carefully watch his language and restrain his behavior. “Whether you can really be a diplomat,” as Sen. Ben Cardin of Maryland warned.

We will know if he reaches out and truly listens to the people and organizations he has maligned. Sen. Chuck Schumer, for instance. J Street, whose supporters he smeared as “kapos.” The State Department professionals who have served longer and know more than he ever will.

We will know if he can keep his word, and support a two-state solution to the Israeli-Palestinian conflict, despite what his boss and benefactor, President Trump, says. Friedman said that two states “remains the best possibility for peace in the region.” Show us you mean it.

We will know, too, if he stands by his assertion that depriving Palestinians of equal rights is “untenable” and “immoral.” He said this in response to questions from Sen. Tim Kaine of Virginia — a man whom Friedman once termed an “Israel basher” but who was kind enough not to remind the nominee of that slur at the hearing.

We will know if, as further promised, Friedman’s personal views and actions — his serious financial support for settlements deep into the West Bank, for instance — will be “completely subordinate to the president and the secretary of state.”

Friedman, until now Trump’s bankruptcy lawyer who has never engaged in public service, said that being ambassador to Israel is “the fulfillment of my life’s work.” But this job isn’t about personal fulfillment; it is about the painstakingly difficult work of representing the United States to a complicated ally smack in the middle of the world’s most volatile region. The time for foxhole conversions is over.

Let’s hope the new David Friedman will stick around.

Will The Real David Friedman Please Stand Up?