What Will It Take For Donald Trump To Condemn Anti-Semitism? 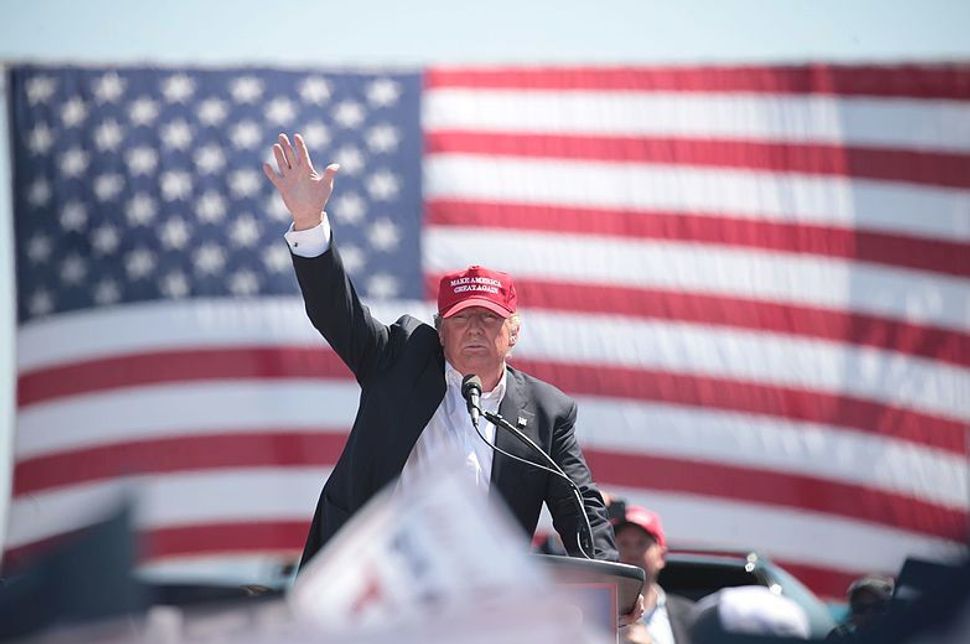 I take Donald Trump at his word that he is not an anti-Semite. But he is a serial enabler of anti-Semitism.

He hired the head of Breitbart News (a vehicle for “alt-right” white supremacy) to run his campaign and, once elected, handed him a powerful White House post.

Trump ran an ad claiming Hillary Clinton was corrupt, with images of money and a Star of David, and another image showing prominent Jews (George Soros, Janet Yellen and Lloyd Blankfein) who allegedly “control the levers of power in Washington” as part a “global power structure.”

Meanwhile, white supremacists cheered him on.

And Trump said nothing.

Post-election, anti-Semitic hate crimes have increased. Neo-Nazis targeted Jews in Montana, not only posting their personal information online but also threatening to march in their town while armed.

Many Jewish community centers across the country have received bomb threats.

Yet President Trump, who tweets about things that matter to him any time of the day, doesn’t say a word about the national disgrace, even on Holocaust Remembrance Day, when the administration’s statement didn’t even mention Jews.

Worse, on Wednesday, February 15, at the joint press conference with Prime Minister Benjamin Netanyahu, an Israeli journalist asked Trump to respond to the fact that some Jews in the United States and Israel were worried that his administration “is playing with xenophobia and maybe racist tones.”

Rather than confront the haters while next to the Israeli prime minister, he oddly boasted about the size of his electoral college victory, mentioned that he had Jewish friends, and that his daughter, son-in-law] and “beautiful grandchildren” were Jewish, and then he rambled on. “You’re going to see a lot of love,” he concluded.

The next day, an Orthodox Jewish reporter, Jake Turx, offered Trump another opportunity to condemn anti-Semitism, perhaps to reassure Jews that bomb threats, hate crimes and increased neo-Nazi activity are unacceptable to him, too.

Instead he snapped at the reporter, cut him off, claiming “I’m the least anti-Semitic person you have ever seen in your entire life” before telling him to sit down.

If the president can’t empathize with, or even imagine, what it feels like to be a Jewish child rushing out of a JCC in fear of a bomb, or the Jewish child from Montana whose picture neo-Nazis posted online, maybe he should think about the increasingly hostile environment confronting his beautiful Jewish grandchildren.

History teaches that hatred of all types – perhaps anti-Semitism especially – grows in a culture where it is tolerated, and not reflexively condemned, by leaders.

If Trump wants to show “love” for us, for our democracy, or even just for his grandchildren, he should reflect on how his inaction and evasions only spawn more hatred for Jews.

If, in the coming days, he finally does condemn anti-Semitism and suggest how he’ll combat it, that will prove positive, even if it is too little and certainly too late.

But now, given his repeated tolerance of intolerance, many fair-minded Americans would see such a statement as disingenuous, given under pressure. Certainly it will be viewed this way by the white supremacists who continue to cheer him.

But for the Jewish community, such a statement should not be the end of the matter. While his silence about anti-Semitism has been deeply disturbing, let’s not forget he is actively lashing out at Mexicans and Muslims as well.

History also teaches that hatreds are related, and everyone in a society is at risk when the vilification of any of its members is accepted, let alone promoted, by leaders.

Kenneth S. Stern is the executive director of the Justus & Karin Rosenberg Foundation

What Will It Take For Donald Trump To Condemn Anti-Semitism?