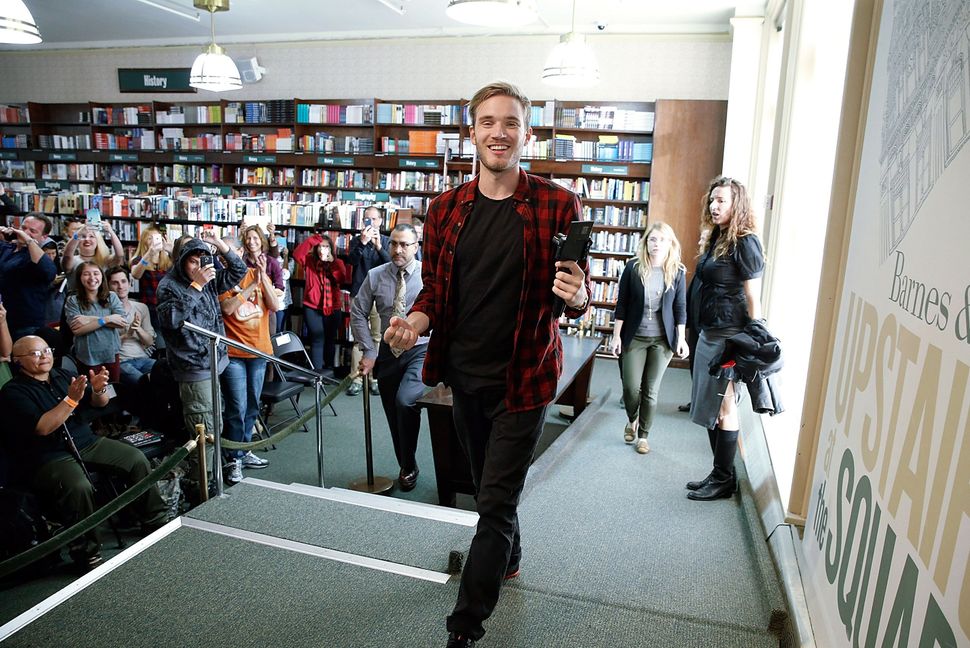 The latest controversy over online anti-Semitism is not about white supremacists or neo-Nazis, but about a 27-year-old Swedish YouTube star who goes by the nickname “PewDiePie” (aka Felix Kjellberg). Last week, Kjellberg , who has more than 53 million subscribers for his video channel that mixes comedy with video game play and rambling cultural commentary, lost lucrative business deals with Disney and YouTube after being accused of anti-Semitism. The offensive jokes and skits by PewDiePie were brought to the two companies’ attention when reporters for The Wall Street Journal who were working on a story on the subject approached them for comment.

But is the outrage at Kjellberg’s antics a welcome response to bigotry or a potentially harmful overreaction?

Kjellberg’s main offense, in a January 11 video, was unquestionably tacky. As part of an experiment to see just how far he could get people to go by paying them though a website called Fiverr, which lines up gigs for freelancers, he contracted two South Asian men to unfurl a banner with the words “Death to all Jews” on video. As the clip played, Kjellberg reacted with apparent shock, then apologized and said that he “didn’t think they would actually do it.” However, he still showed the clip, even though the segment was not a live broadcast.

On January 22, Kjellberg aired another video he solicited via Fiverr, in which an actor dressed as Jesus Christ declared that “Hitler did absolutely nothing wrong” (a running joke in the more juvenile circles on the internet).

The Journal found several other instances of Kjellberg using Nazi symbolism, from swastikas to a Nazi-style uniform to a clip of a Hitler speech, in a quest to get a laugh. The article also reported that The Daily Stormer, a neo-Nazi website, had praised Kjellberg for “making the masses comfortable with our ideas” and even briefly used the motto “The world’s #1 PewDiePie fansite.”

Kjellberg, who took down three of the offending videos, released a video response apologizing for the jokes that had gone too far. But he also lashed out at the media, charging that they “misrepresent” and “viciously attack” for profit.

Several commentators have compared Kjellberg’s statement to Donald Trump’s diatribes against the media. But first of all, even if Kjellberg has a massive audience, he is hardly the president of the United States. Second, he apologized for screwing up, which puts the 27-year-old gamer way ahead of the 70-year-old president in maturity.

Furthermore, while Disney was certainly within its rights to drop Kjellberg, some of his treatment by the media has been grossly unfair. The Journal story cataloged offensive moments in his gags without providing the full context (and may have misinterpreted an innocuous pointing gesture as a “Nazi salute”). Wired ran a piece titled “PewDiepie Was Always Kinda Racist — But Now He’s A Hero To Nazis.” (After pushback, that was changed to “PewDiePie’s Fall Shows the Limits of ‘LOL JK.’”) A headline on SheKnows, a lifestyle and parenting website, called the YouTube star “a horrible racist.”

Meanwhile, Aja Romano on Vox refers to “the litany of evidence suggesting that Kjellberg is more sincere in promoting anti-Semitism than he says” — then grasps for such straws as possibly neo-fascist haircuts. After noting that Kjellberg “uses Nazi imagery to represent something he views as exaggerated and hyperbolic,” Romano asserts that “this has the side effect of turning Nazism into a cheap joke” and “normalizing Nazi ideology.” Hold on. Mockery of Nazism promotes Nazi ideas? Does Nazi propaganda include the parody videos that turn Hitler’s rant from the movie “Downfall” into an angry reaction to just about anything? Was Ben Fritz, one of the authors of the Journal article, normalizing Nazism when he joked on Twitter about watching the alternative history series “The Man In The High Castle” because of a “hard-on” for Nazis?

“Just putting it out there brings it more and more into the mainstream,” the Anti-Defamation League’s associate director, Jonathan Vick, told the Journal. By that logic, we should also condemn Mel Brooks’s “The Producers,” with its immortal “Springtime For Hitler” romp (“Don’t be stupid, be a smarty; come and join the Nazi party!”). Edgy humor about Jews and anti-Semitism is also a staple on “South Park.” Indeed, you could argue that Nazi jokes are very much in the Jewish tradition of using humor to cope with tragedy.

PewDiePie is no Mel Brooks and no “South Park.” At best, he’s an acquired taste. (Most of his fan base is under 18.) But it’s fairly clear that his jokes rely on the assumption that bigotry is bad — that a Nazi metaphor is an insult and that “Death to all Jews” proves that people on Fiverr will say anything for money. His reaction is much like that of the slack-jawed audience at the premiere of “Springtime For Hitler” in “The Producers.” These are not anti-Semitic jokes so much as they are anti-Semitism jokes.

In part, the backlash against Kjellberg is driven by concerns that “ironic bigotry” on the internet has been used as a cover for real bigotry, helping the rise of the “alt-right.” Pseudo-libertarian provocateur Milo Yiannopoulos made an art form of the “just-kidding-or-maybe-not” technique to excuse both his own noxious statements “Birth control makes women unattractive and crazy,” “Jews run the media” as well as racist, misogynistic and anti-Semitic abuse by “alt-right” trolls. But such “ironic bigotry” — unlike, I believe, PewDiePie-style humor — is typically played straight with no absurdist or sarcastic context, and is intended not only to shock but also to cause distress.

Could Kjellberg turn out to be a bona fide anti-Semite? Sure — though, for what it’s worth, he is being strongly defended by a Jewish friend, fellow YouTuber Ethan Klein. It is also worth noting that he has apologized for his stunts, just as he did several years ago for rape-related jokes in his video game play commentary) and disavowed the white supremacists claiming to be in his corner. Yet the online magazine Mic responded to Kjellberg’s apology by beating up on him some more — for refusing to admit that his edgy humor is “normalizing hatred” and empowering hate groups. This is starting to sound less like a plea for respect and more like a Soviet-style demand to confess ideological error.

The surge in online bigotry — and its real-life manifestations, such as bomb threats to Jewish centers — is frightening. But a war on edgy humor is not the answer.

For one thing, we don’t want a situation in which the next revival of “The Producers” can feature only a production number titled “Springtime For Marginalized Groups.” For another, when the label of anti-Semitism gets slapped on the kind of provocative humor young people routinely see in popular culture — very often from Jewish comedians such as Sarah Silverman — it can weaken the stigma against bigotry. If PewDiePie can be called a “horrible racist” for failed and tasteless jokes, being called a horrible racist is no big deal. That’s how the Daily Stormer crowd wins.