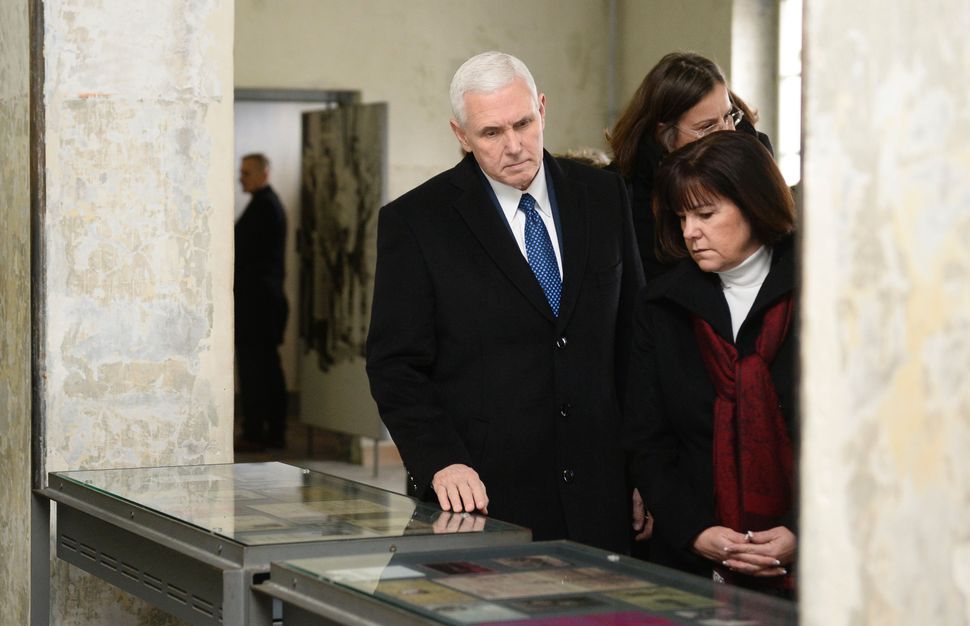 After months of negative press and justifiable criticism for a campaign plagued by anti-Semitic dog whistles, both President Trump and Vice President Mike Pence are finally making amends.

Last week, Trump forcefully responded to the shocking increase in anti-Semitic incidents, condemning such attacks and threats as “horrible” and “painful.”

Meanwhile, Pence and his wife, Karen Pence, visited the Nazi concentration camp Dachau while visiting Germany for the Munich Security Conference. While Pence delivered no remarks at the site, his presence spoke volumes considering the only news the Trump administration has made pertaining to the Holocaust was a statement universalizing the victims of the Holocaust and then doubling down on the decision not to mention that the vast majority of those who perished were Jews. It is a positive step for a top White House official to send the signal that they are trying to understand the historical significance for the Jewish community – a step that should never have had to be taken, but positive nonetheless.

Days after his appearance at Dachau, Pence made more overtures to the Jewish community; this time, he physically helped with cleanup efforts at a vandalized Jewish cemetery in St. Louis. While a campaign put together by Muslim activists (including Linda Sarsour, whom I have criticized in the past but who deserves my praise) was well publicized by the mainstream and Jewish press, Pence’s efforts drew considerably less attention and praise and even some negative press coverage. Some wondered if his efforts stymied cleanup efforts. Did the same individuals and press wonder aloud if Sarsour’s actions had any ulterior motives? If not, why the effort to vilify the vice president?

Many people in the Jewish community called on the first daughter, Ivanka Trump, to make her father’s administration more sensitive to the concerns of Jewish Americans. When she then tweeted her support of the many Jewish community centers around the country facing bomb threats over the course of recent weeks, that, too, wasn’t enough for many of the president’s critics. Some questioned why her statement, which came in the form of a 140-character tweet, didn’t explicitly name Jews or anti-Semitism.

While the onus is on the administration to earn goodwill among Jews, it’s increasingly apparent that no matter what President Trump or those affiliated with his administration do, it’s never going to be enough for many of his Jewish critics. His detractors are still hysterically accusing the president of anti-Semitism and calling the statements and actions of his administration “too little, too late.” For Steven Goldstein, executive director of the Anne Frank Center for Mutual Respect, the efforts of Trump will never be enough. It’s not about what Trump says or what he does, but who he is.

If Jewish critics of the president want their complaints to be taken seriously, it’s time for some self-evaluation. Is it really about claims of anti-Semitism, or are they really (justifiably) upset about the administration’s treatment of immigrants and the press, or about its eyebrow-raising ties to the Russian government? Misplaced accusations about the administration’s anti-Semitism stretches the legitimacy of critics. This strategy of at-all-costs resistance without ever so much as muttering “credit where its due” might garner support among the diehard left, but it does nothing to build bridges between those who oppose the administration and the many Americans on the fence about the Trump phenomenon.

A resistance to what many viewed as a hyperactive politically correct culture drew some voters to Trump. In an interview in the spring of 2016, one Trump voter told The Atlantic why he supported the candidate:

“For me personally, it’s resistance against what San Francisco has been, and what I see the country becoming, in the form of ultra-PC culture. That’s where it’s almost impossible to have polite or constructive political discussion. Disagreement gets you labeled fascist, racist, bigoted, etc.”

Accusations of anti-Semitism are becoming increasingly hollow, as the Trump administration is spending serious time and effort to win over the American and Israeli Jewish community. This was evidenced most recently by its behind-the-scenes efforts chronicled by Politico. Continued calls of anti-Semitism without even so much as an acknowledgement of the efforts to counter this perception of this administration could backfire, creating more Trump support, not less.